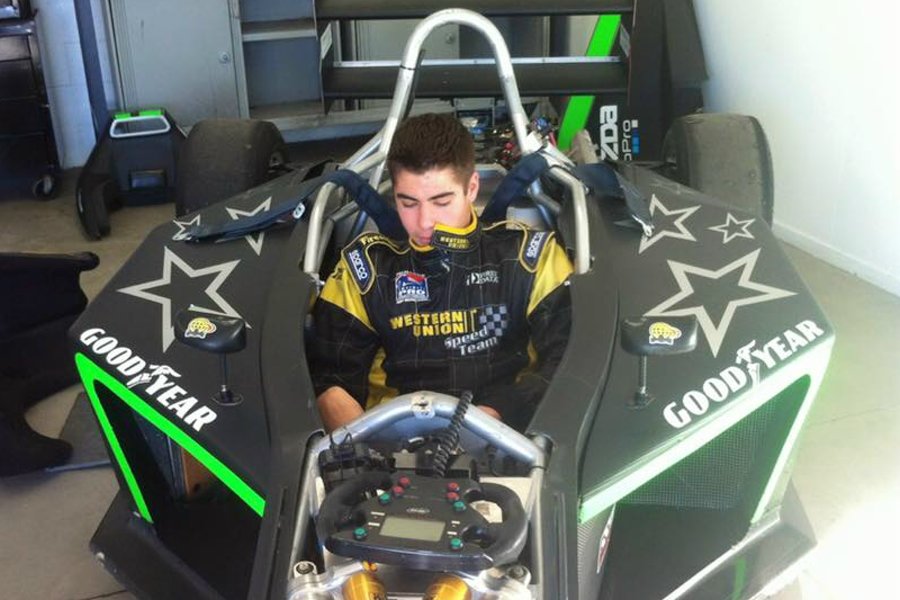 Carter Williams prepares to go out to test at Buttonwillow Raceway Park on Feb. 2-3 in the FormulaSPEED GEN2 chassis powered by the Mazdaspeed MZR 2-liter engine

Carter Williams of Clovis, Calif., will make his auto racing debut in 2016 in The Formula Car Challenge presented by Goodyear, part of the Mazda Road to Indy program, after being chosen to receive a scholarship from VMB Driver Development and World Speed Motorsports.

“This is a dream come true to win the VMB Driver Development scholarship,” Williams said. “I am very excited about racing in the Formula Car Challenge with World Speed Motorsports.”

The 17-year-old Williams, a senior at Sanger High, began preparations for the seven-event, 14-race season Tuesday and Wednesday with a test on a 1.4-mile course at Buttonwillow (Calif.) Raceway Park. Williams completed approximately 250 laps, running in 25-lap segments.

“Coming into the test after the scholarship shootout, there were some things I needed to improve upon,” Williams said. “Right off the bat, I started to drop seconds off my lap times and on the second day, I improved a ton more and ended up with the quickest car (among three drivers) in the test. Driving a car with a lot of power requires a lot of throttle and brake control. I made mainly driving changes to learn the braking and acceleration needed to go fast.

“Racing in karts is an excellent way to begin your career, but driving a car is a lot different.”

Williams was one of four drivers who received World Speed Motorsports Rising Star Award in 2015, which provided him with the opportunity to test with the team and be considered for the scholarship. In addition to driving the car, Williams was also evaluated on his feedback to the engineers and how he responded during questions during a press conference during the selection process.

“We were impressed by Carter’s performance on and off the track, and we enjoyed working with him at the WSM Rising Star Award test day,” WSM President Telo Stewart said. “When Steve (Brisentine, VMB President) and I met to decide how we would best use the remaining 2016 scholarship funding, we both agreed that helping Carter make the transition from karting into open wheel would be a great opportunity for us and Carter.”

“We want to do at least one more day of testing before Laguna Seca,” Williams said. “We definitely have a few things still to work on, but I’m feeling more confident after the Buttonwillow test. I have the highest expectations for myself, so winning races and the championship will be the goal for this season.

“I would like to thank my sponsors and the people who have supported me throughout my career. I would not be where I am without their support.”