Series continues to set precedent for 206 racing, expands to five weekends in Wisconsin, Illinois and Iowa

The 2016 season of the Briggs & Stratton 206 Cup presented by Noram Racing is set, featuring two new tracks, a revised class structure and a tire that in which the series itself has helped to develop. All signs point to this being the water shed season for the Midwest’s fastest growing regional series.

2015 was a great season for the 206 Cup series. The year featured four of the Midwest’s finest tracks, drawing nearly double the entries than the season before. Racing was very close in all classes, with most of the championships being determined the final weekend at the world renowned US AIR Motorsports Raceway in Shawano, WI. The 206 Senior class alone had 34 drivers, some who traveled up to 500 miles, for the event. At the conclusion, every participant went home with a share of the $10,000 in prizes supplied by the title sponsor Briggs & Stratton and the rest of the series’ supporters.

The 206 Cup received commitments for 2016 from both Briggs & Stratton and Vega tires, two of the series largest supporters. The Vega FH compound was the spec tire for all classes in 2015. The series wanted to find a compound that better met the requests of the racers in their region. Many of the clubs in the Midwest use very hard tires designed to last for a full season of racing. Although the wear versus grip levels of the FH was impressive, some competitors had a difficult time acclimating to the large increase in grip the Vega compound provided.

Vega listened, and offered the 206 Cup a radical solution; the opportunity to design a new tire from the ground up to fit the series’ needs. Along with the Vega factory in Italy, Brad Zoeller from TS Racing (Vega United States importer) took all the data that 206 Cup had collected, along with data from other groups using the same tire to begin development. Within 90 days, four completely new tires had been designed, prototyped and shipped to Florida for testing.

Series promoters Steve Vermeer and Greg Jasperson flew to the all-new Bushnell Motorsports Park in Florida to test the new tires first hand. They were accompanied by veteran karter and Rock Island Grand Prix all-time winner Gary Lawson, who was asked to join the testing to provide an experienced, unbiased opinion. Two days, three distinctly different chassis and over 1000 laps later, they all agreed they had found the new tire for 2016. A tire with great grip and exceptional wear, the Vega VAH was born.

“We believe this new tire will be very well received by our racers,” stated series director Greg Jasperson. “They still provide excellent grip, but compared to the FH tire they have a noticeably stiffer sidewall and greatly increased longevity. Vega is currently in production of the new tires, and they will be available well before the start of our season.”

Next on the agenda was to bolster their staff. Vermeer had served as the series race director since 2014, but with the growth of the program he is focusing his attention on the tech area of the series. The 206 Cup reached out to Glenn Firing, a Race Director for many successful series, most recently the United States Pro Kart Series. Firing brings in a strong amount of experience and professionalism to the series in 2016. 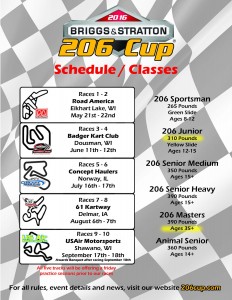 Another big change is the new race format the series will be adopting in 2016. In years past, the series had run a version of the old ‘Moto’ format with a random start via pill draw. The large fields the series has been attracting have not worked well with the randomly drawn grids, so the new format now features qualifying, two heat races and a feature race per round. Each race weekend features two rounds (one Saturday, one Sunday) to provide a 10-race championship chase. This should keep the large fields racing smoothly while increasing the amount of track time that all the racers receive.

2016 also sees some changes to the class structure. The animal classes have been scaled back to a single Animal Senior class, while the 206 Senior class will offer a Medium and Heavy option. Also, a 206 Masters class has been added after many requests from potential competitors. Two different tracks have been added from the previous season. 61 Kartway in Delmar, Iowa, which has a great 4-cycle following, will host the series for the very first time. Road America Motorplex also returns to the schedule after a one year break. This makes for a total of five races on the 2016 calendar.

“One thing that makes our series so unique is the intermixing of the two types of bodywork prevalent in our area,” continued Jasperson. “However, in some cases; there was a distinct advantage to one type or the other at some tracks in certain classes. We wanted to try and find a way to further level the playing field and make sure that nobody felt they were at a disadvantage from one weekend to the next. So moving forward, any type of chassis can run any type of bodywork. The bodywork components must still meet the rules for each individual component, but you may now have a large fiberglass nose on your CIK chassis with CIK pods if you wish, or vice versus.”

Jasperson and Vermeer have successfully formed a viable series that features affordable racing and super competitive fields. Their rapid growth in the past two seasons shows how well the karting community has responded to methods they are employing with all signs pointing towards a significant increase in attendance in their 2016 campaign.

Visit www.206cup.com to learn more about the series and events for 2016.