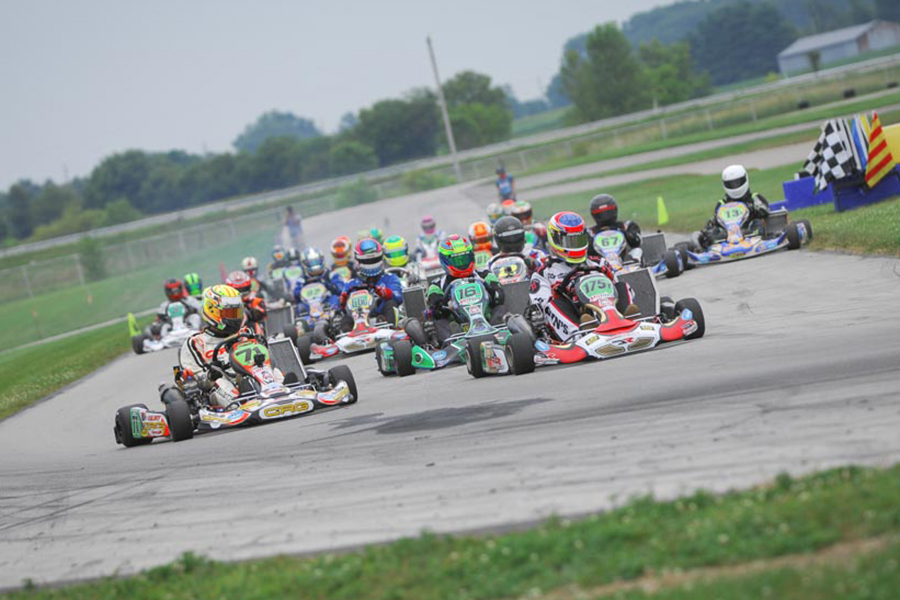 Superkarts! USA will expand the growing S4 Pro Stock Moto Super Master program in 2016, adding the sub-category as an official class on the 2016 Pro Tour (Photo: On Track Promotions - otp.ca)

Over the last five years, Superkarts! USA has evolved steadily as the organization continues to spread its wings, expanding to the younger age brackets to bring more racers into the SKUSA program.  In 2010, they added a class for 8-12 years olds, which has morphed into the insanely popular TaG Cadet Mini Swift class, and they announced last fall that the category would be split into Micro Swift and Mini Swift in 2016 to give the younger racers in the age group their own class in which to develop.  At the other end of the spectrum, SKUSA continues to be the sport’s leader in Master-level racing, and the strength and growing competitiveness in the S4 Pro Stock Moto class has been staggering. The S4 Master Stock Moto class is open to drivers 30-years-of-age and older, which results in a huge gap between the youngest and oldest pilots in the category, as there are incredibly quick drivers in the 40s, 50s and 60s.  New drivers hit the 30-years of age mark each year and the level of competition continues to increase with the arrival of new racers.  Last year, SKUSA acknowledged this evolution by offering the new S4 Super Master class for 45+ year-old pilots on the ProKart Challenge regional level and the initial support was very positive.  For 2016, SKUSA will take this program to the next level, making it an official Pro Tour class by running a sub-category at the SpringNationals and SummerNationals.  At the 20th annual SuperNationals in November, S4 Super Master Stock Moto will have their own dedicated race group and full five-driver podium.

“The growth of our core customer group has been exciting to watch over the past 10+ years, and we all find great satisfaction in standing back and seeing the talent of our young TaG Senior, S1 and S2 drivers who started with us back in TaG Junior or S5 Junior Stock Moto,” commented SKUSA president Tom Kutscher. “We’re seeing this happen with pilots graduating from Mini Swift into TaG Junior and TaG Senior now as well. This is what is so exciting about our S4 Master Stock Moto class, as it’s becoming such a competitive platform now that a number of ex-S1 pilots have turned 30 and they’ve decided to enter the S4 battle.  The racing is incredible.”

“This is where the idea for the S4 Super Master class came from,” Kutscher continued. “We have guys who have been with us in S4 for 10 years and they’re just as dedicated to their programs as anyone. The class for drivers 45-years-of-age and older provides our customers with a category better suited for the adult racer.  I’m really excited about this program and I think they’ll be fun to watch. I’m also thrilled that they’ll have a chance to enjoy the exhilaration of being on the SuperNationals podium as well.  This is a great evolution for our overall program.”

Just as it did in 2015, the S4 Super Master Stock Moto class will run within the S4 race group on the ProKart Challenge, and they will be scored separately along with having their own dedicated podium celebration. On the Pro Tour at the SpringNationals and SummerNationals, S4 Super Master will run as a sub-category within the S4 race group and will be scored separately.  The winner of the S4 Super Master class will be invited to the standard S4 podium.  As stated, at the SuperNationals, the class will have its own 44-driver race group and its own podium celebration.  It will also be acknowledged with full Pro Tour championship points and the top-three drivers will receive their number plates for the 2017 season. On the PKC trail, the class will run at 415 lbs, but on the Pro Tour, the class will run the same exact specs as the S4 Master Stock Moto class at the same weight of 405 lbs.  Drivers will need to declare their intentions to run in the S4 Super Master class at the start of the year.

The delineation of the S4 Pro and S4 Super Master class at the SuperNationals will make SKUSA’s Priority Pre-Entry Program even more important in 2016.  Last year, the SuperNats attracted a total of 60 S4 drivers into their max entry cap of 88.  This list included over 25 competitors who were over the age of 45.  For this year’s event, separate S4 Pro and S4 Super Master race groups will be offered with entry caps of 44, meaning that running the SpringNationals and SummerNationals will be crucial to gaining an entry into the 20th annual SuperNationals in November.