Great Performance by CRG Drivers at the Florida Winter Tour 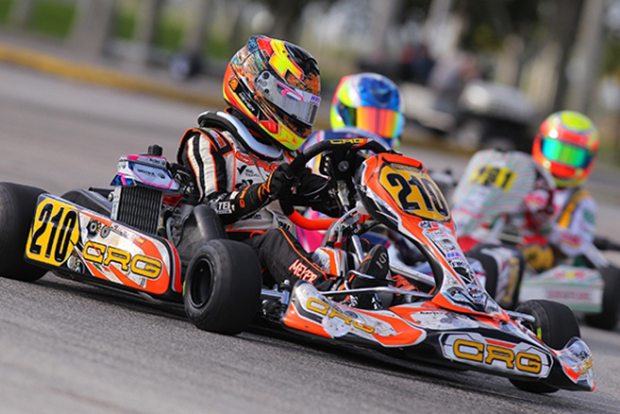 The Spanish driver Kilian Meyer of CRG Nordam claimed the fourth place in the first round of the Rotax Max Challenge in Homestead, after fighting for the victory. His fellow countryman Mauricio Van der Laan has been among the protagonists of Senior and ended seventh. Christian Brooks 13th after holding P6. Good performance by Enzo Scionti in Micro Max. Jack Crawford 18th in Rotax Mini.

CRG Nordam drivers put in very good performances in the first round of the Florida Winter Tour of the Rotax Max Challenge in Homestead-Miami, confirming the competitiveness of the chassis produced by the Italian company with the support of team manager Martin Reuvers and of HRS Racing Engines for the preparation and technical development of engines.

The young Spanish driver Kilian Meyer obtained a good result in Junior. He has been among the protagonists of the Final taking the lead of the race and staying within the leading group until the end. Meyer eventually claimed a great fourth place after being third in the Prefinal. Kilian Meyer is currently third in the classification at 445 points, equal with Michael Dorlando. Both drivers follow Ryan MacDermid, who stands at 505 points, and the winner of the first round Arthur Leist at 468.

A great performance was also put in by the other Spanish driver of CRG in Senior Max. Mauricio Van der Laan has been in fact shining in the Final, where he secured the seventh place at the end of a comeback race started from the 12th place of the Prefinal. The American Christian Brooks came to the fore in the first part of the Final instead, as he managed to install himself in P6 before ending his effort with the 13th place, after the ninth place scored in the Prefinal.

In Micro Max, the Italo-American Enzo Scionti confirmed his place within the top ten drivers in the Final, where he clinched the ninth place.

Among the other CRG drivers present in Homestead, Jack Crawford was eighteenth in Rotax Mini.