Brooks beats out Senior field as Brueckner, French, and Kinnear double up 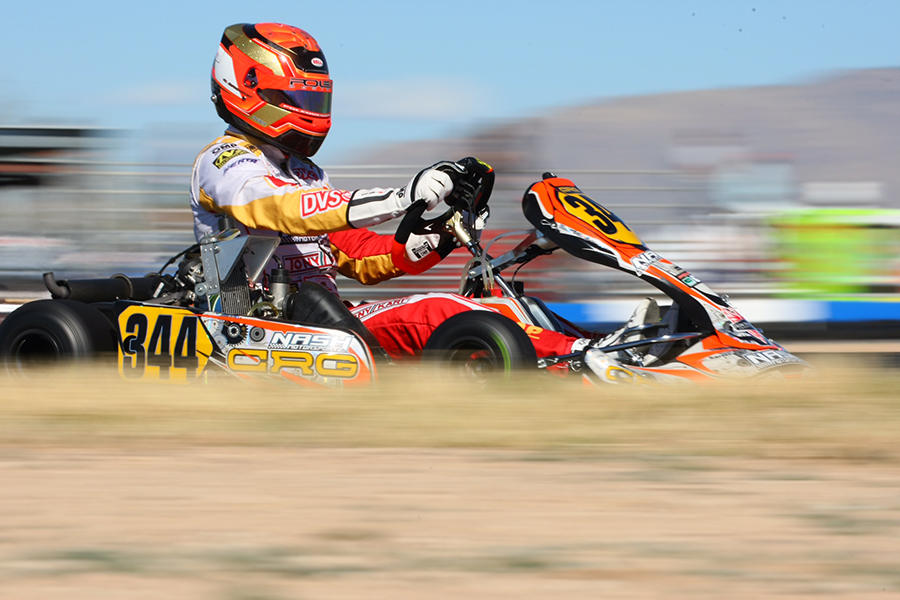 The first weekend of the 2016 Challenge of the Americas closed out Sunday at the Musselman Honda Circuit in Tucson, Arizona. Throughout the three days of competition, the weather was perfect aside from strong winds that hampered conditions during the main events Sunday afternoon. On-track the five Rotax Max Challenge divisions and two Shifter categories provided some exciting racing which completed the first-third of the championship chase in the premier west coast series on the left coast. Senior Max driver earned victory to give CRG a big triumph, while Jake French and Ryan Kinnear doubled up in the shifter categories. Junior Max pilot Nick Brueckner swept the weekend, putting him as the driver to beat in the title hunt. 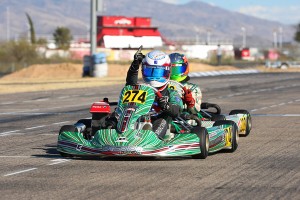 Sunday ended as the weekend began with the entire Nash Motorsportz Senior Max field chasing Christian Brooks. The 2015 vice-champion qualified third in the morning session and worked his way to the win in the Prefinal. The Nash Motorsportz / CRG driver started on the pole position for the main event and grabbed the holeshot at the drop of the green flag, never looking back to win by over six-seconds and giving the brand its first Senior Max victory at the series in a number of years. It was a quartet of Rolison Performance Group drivers behind him fighting for second. Top qualifier Michael Michoff (Kosmic), Coltin McCaughan (Kosmic), Kellen Ritter (Kosmic) and Saturday winner Jim McKinney (Kosmic). They mixed it up some, but in the end it was McCaughan winning the Canadian battle over Ritter to finish on the podium. McKinney worked past Michoff on the final lap for fourth, gaining some extra points toward the championship. 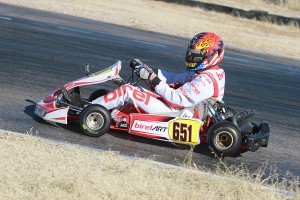 The best way to start a championship run is to win everything in the first weekend. Nick Brueckner did just that in the Rolison Performance Group Junior Max category. Brueckner (Orsolon Racing / Tony Kart) swept the action Saturday and repeated the performance on Sunday. Qualifying was another fast lap, earning the pole position by nearly two tenths ahead of Trey Brown (Ryan Perry Motorsport / Tony Kart). Brueckner drove away to a 2.5-second advantage in the Prefinal, but Brown picked up the pace in the main event. The two ran nose to tail the entire 25-lap distance, with Brueckner able to reach the checkered flag by just over a tenth of a second. Brown finished second with Zoey Edenholm (Koene USA / Tony Kart) placing third. Trey was found to have an ‘out of spec’ reed cage and thus removed from all the results on the weekend. That put Edenholm to runner-up and Matthew Taskinen (Rolison Performance Group / Kosmic) to third after he beat out Max Fedler (Unser Racing / Tony Kart) and Carter Herrera (Cambrian Go-Karts / Birel ART) to the checkered flag.

Things were shaken up in the Cambrian Go-Karts Masters Max category following Sunday’s action. Billy Cleavelin (Rolison Performance Group / Kosmic) emerged as the top driver after placing third in qualifying. He went on to win the Prefinal and the Final, but came out of the tech barn with an ‘out of spec’ reed cage following the victory. This disqualification removed his results of the weekend, handing John Crow (Full Throttle Karting / Birel ART) the victory on Sunday and named the winner for Saturday’s main event. Mike Jones (Dallas Karting Complex / Sodi Kart) challenged Crow throughout the main event, and was classified second with Canadian Christopher Patterson (Overdrive Motorsports / Exprit) placed on the podium in third. Two-time series champion Donald Durbin Jr. (Birel ART) finished fourth, as the Cambrian Go-Karts driver replaced an injured team driver on Sunday, Brian Taylor (Ruthless Karting / PCR) in fifth. 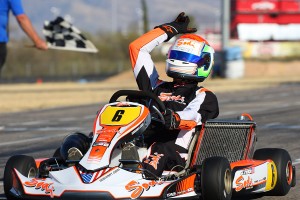 Jake French swept the opening round of the Shifter Senior debut at the Challenge (Photo: SeanBuur.com)

Jake French completed a dominating performance in the Energy Kart USA Shifter Senior category debut with another sweep on the day. The Dallas Karting Complex / Sodi Kart driver finished the day with a near five-second victory to close out Sunday. Don Whittington (Pure Karting / Tony Kart) bested Jacob Neal (VRP Racing / Tony Kart) for the runner-up position. Harold Gottsacker IV (Champion Racing / Intrepid) and Kol Bailey (Pure Karting / Tony Kart) completed the top-five. Dallas Karting Complex Shifter Masters had Ryan Kinnear coming away with the second victory of the weekend. Veteran Darren Elliott (Nash Motorsportz / CRG) set the pace through qualifying and the Prefinal, only to be caught up in an opening corner skirmish at the start of the main event. This allowed Kinnear to put his Champion Racing / Intrepid into the lead, where he remained throughout the 25-lap event to secure the victory. Elliott worked back up to second with Nick Firestone (DR Kart) third and Juan Garcia (CRG) fourth. 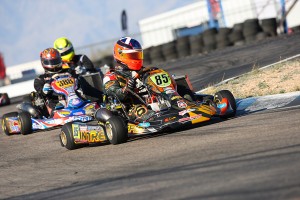 Canadian Marco Kacic secured the second victory of the weekend in the Go Kart Hero Mini Max category. The day was similar to Saturday, fighting for the top spot with Diego LaRoque (Benik) every session. Kacic (CRG Nordam) landed the fast time in qualifying by 21 thousandths of a second over LaRoque and beat the Arizona driver to the line at the Prefinal checkered flag by 47 thousandths. Kacic proved to be too much for the rookie Mini Max driver, pulling out to a 1.1-second victory over LaRoque. Austin Torgerson (Tony Kart) finished third on the podium with Joe Brienza II (Tony Kart) right behind in fourth and Dustin Salaverria (Tony Kart) fifth.

It was a perfect weekend for Ashton Torgerson in the Ryan Perry Motorsport Micro Max division. After sweeping Saturday, the Tony Kart drivers repeated the feat on Sunday by leading the category from qualifying to the main event for a perfect score toward the championship. Carson Morgan (Benik) gave Torgerson some challenge in the Final, taking the lead for the first time all weekend on lap seven. It was short-lived, as the young pilot drove off at the end of the long straight, dropping back to fourth. Torgerson scored the win by over 11 seconds with Morgan fighting back to finish second ahead of Enzo Scionti (CRG). Tuesday Calderwood (Tony Kart) and Piers Aspiras (Birel ART) completed the top-five.