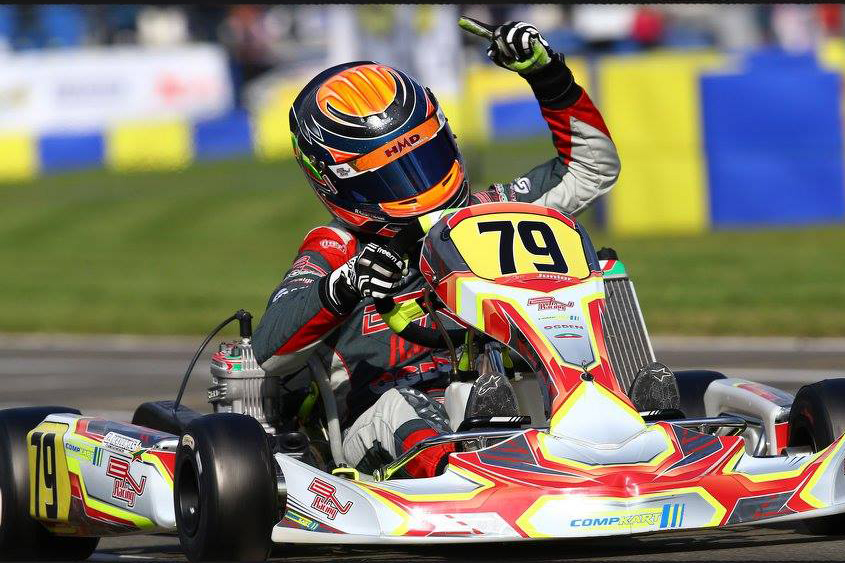 – Due to the busy schedule during the month of November, we are late in publishing the October article. We apologize for the tardiness, and hope you enjoy the article.

The 2015 season has been a successful one for United States competitors going overseas to contest world-level events. Following the performance of Florida driver Logan Sargeant earning the CIK-FIA World Championship in the KFJ category, Illinois driver David Malukas stamped his name on the world stage with a dominant victory at the 2015 IAME International Final held at the Le Mans Karting International facility in France on October 15-18. 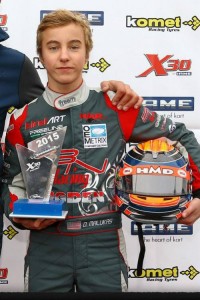 Malukas took on the 98-driver field of the Junior X30 division aboard his CompKart chassis. The 2014 Superkarts! USA Fikse Wheels Pro Tour was at the top of the time charts throughout the practice sessions leading up to the official qualifying run. A 55.323-lap put him P1 overall after the four different groups completed their fast times, giving Malukas the pole position for all five of his heat races.

Friday was a solid start, with two wins in his first two heat races. The first was a four-tenth margin of victory while the second was another wire-to-wire win, this time by just one tenth of a second at the line. Saturday began with a healthy 1.2-second win in the seven-lap A vs. D run. Malukas led another seven laps in his fourth heat race, and finished up the ‘manche’ fifth straight win after losing the led midway through the race. The five wins kept the pole position intact for the Prefinal.

Malukas led all 11 laps of the pre-main to remain the driver to beat. David continued to get quicker and quicker aboard his CompKart throughout the race, posting his quickest on the 11th and final lap to secure a 1.155-second gap at the checkered flag. It was a similar performance in the 18-lap Final, as Malukas continued to decrease his fast lap. The penultimate lap was his best (55.761), as he enjoyed the final circuit thanks to a 4.5-second advantage he accumulated. The victory was the first for a United States of America driver at the event, reconfirming Malukas’ status as one of the top young drivers from North America.

The 14-year old driver is focused on adding to his growing resume both in the United States and across the Atlantic. The plan is to compete in the Senior level here in the USA, while competing in the Junior ranks in Europe, with much of the focus on competing well at the international events. Malukas recently had surgery on his finger after someone landed on it during a session of jiu jistu. David is expected to be ready for the 2016 season with no setbacks. 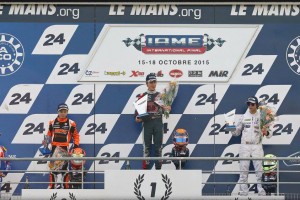 Malukas on top of the podium in Le Mans as the X30 Junior victor (Photo: IAME International FInal)

Chassis: CompKart
Engine/Engine Builder: Ogden
Sponsors: J3 Competition, Ogden, HMD Trucking
Series You Compete In: WSK, CIK, SKUSA, FWT, USPKS, WKA
Years Karting: 7
How did you get started in karting? One day we were driving to Michigan when we saw a sign that showed the South Bend track. We decided to try it and after that day, it just stayed with us.
What has been the high point in your racing career? Very recently becoming X30 Junior World Champion in addition to first place at 2013 Rotax Grand Finals
What are your goals in racing? To work hard, stay focused and have a hell of a fun time
In a few words, how would you describe your driving style? A mixture of European and American driving styles
Funniest moment at the race track? When I just started racing at the age of 6, I pulled into the scales with a broken bumper. So, because it was broken, my dad lifted the kart with both hands on the exhaust. He finished the lift while his hands were sliding like gel against the exhaust. He held two ice packs for the rest of the day.

What do you do when not at the track? Muay Thai, wrestling, jiu jistu, running, playing piano, and school
What are your goals outside of karting? To excel in school and sports
What type of street car do you drive? None
What type of street car would you like to drive? Tesla
What are your pet peeves or things that irritate you? When people chew with their mouth open, and when people continue to click their pen.
What do you think could be done to improve the sport of karting? Use a lot of social media to expand the amount of viewers
What are your favorite aspects about the sport of karting? I like the feeling when you see the green flag for the first time or getting a shot of adrenaline and excitement every time you start the engine. In addition, I like the rush I receive on the last two laps when you have a shot to win. There are too many reason, as I could go on forever.