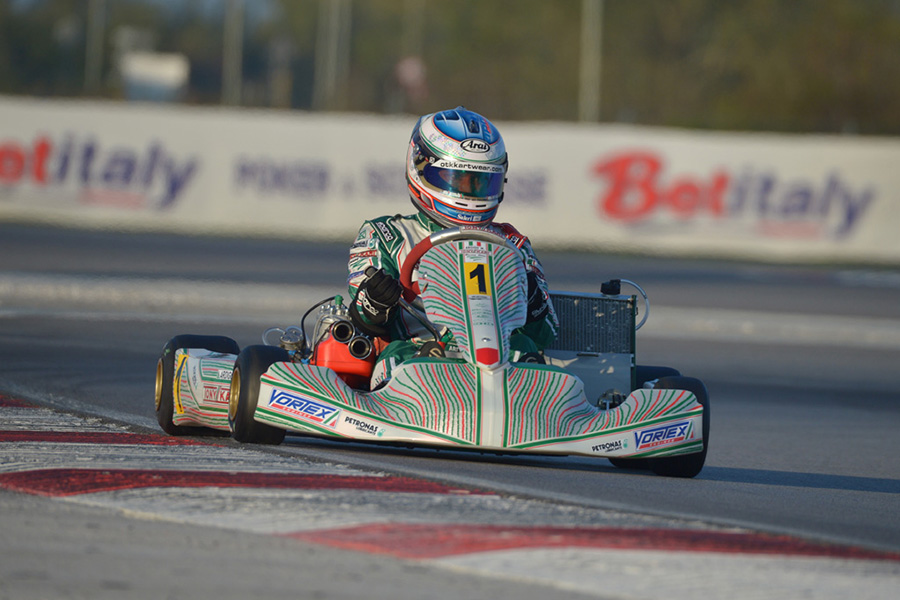 The 153 scrutineered drivers took part in the qualifying of the WSK Final Cup at the Adria Karting Raceway this afternoon. The single-round event is the last race on the WSK Promotion calendar for the 2015 season: all the drivers are eager and motivated to do their best since the first phases of the event. That’s exactly what happened in qualifying in all the four categories admitted to the competition: the three international categories KF Junior, KF and KZ2, together with the always heated 60 Mini and its young drivers at their first experience at international level. Every driver aims at achieving a top result, at doing better than the others in an event which, after Sunday’s Finals, will not give the occasion for a rematch. There cannot be a better moment to announce the gripping live streaming available on Sunday 1st November on the official website wsk.it from 11.00 am, with the whole program starting with the Prefinals.

Young and talented drivers make themselves conspicuous in qualifying

Qualifying gives younger drivers the opportunity to take centre stage. Among them the Swedish Isac Blomqvist (Tony Kart-Vortex-Vega), whose 49”694 allowed him to move to the top of the KFJ standings, even though with very narrow gaps. In fact, in second position, 64 milliseconds behind the leader, we find the Russian girl Milen Ponomarenko (Lenzo-LKE-Vega), ahead of the French Charles Milesi (Tony Kart-Vortex-Vega), third with a gap of  0”082. Marta Garcia, the winner of the CIK-FIA Academy Trophy and fourth in the KFJ European championship, seems still to be saving energy: the girl from Valencia finished qualifying in tenth position. The 60 Mini is very crowded too; here the best time was set by Leonardo Caglioni (EvoKart-TM-Vega) with 56”402. Behind him the Danish Lucas Sommerlund (Energy-Iame-Vega) and Luca Griggs (CRG-TM-Vega). Narrow gaps this time too: 60 and 72 milliseconds respectively.

The World Champions at the top in KF and KZ2

It is already time for the heats

There are great expectations for heated races, beginning with the heats. The first heats took place today early in the evening. The winners were Mattia Michelotto (Energy-Iame-Vega) and Dan Skocdopole (CRG-TM-Vega) in 60 Mini and, in KFJ, Charles Milesi and Clement Novalak (Tony Kart-Vortex-Vega).