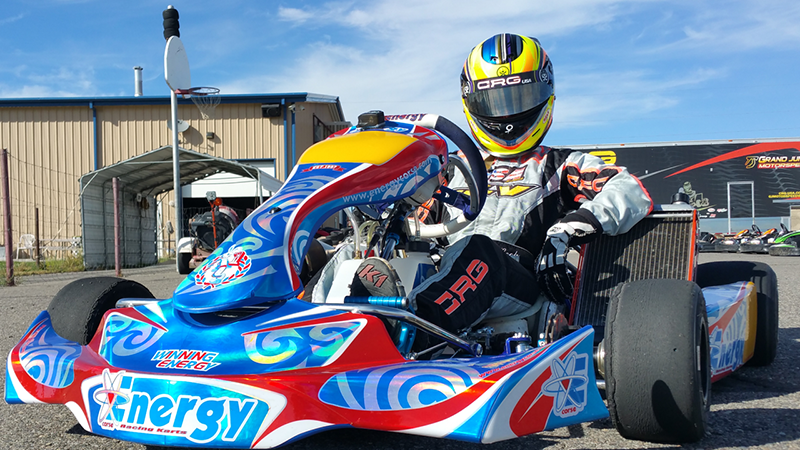 Sabré Cook awaits her new Energy Kart suit but couldn't wait to get on the track to do some testing. (Photo: www.SabreCook.com)

With the ultimate round of the inaugural MAXSpeed Entertainment promoted US Open program set to take place this coming weekend at the Rio All-Suite Hotel and Casino in Las Vegas, Nevada, Elite Shifter pilot Sabré Cook will enter the event with a little different look. Currently sitting third in the championship points battle, Cook will trade in her Stock Honda powered CRG for a new Energy Kart as she makes the switch to the Energy Kart USA squad.

Already completing days of testing at the Grand Junction Motor Speedway facility, Cook is feeling comfortable in the new chassis and has shown increased speed throughout the rigorous testing program.

“I am really enjoying the Energy chassis,” explained Cook. “The characteristics of the kart suit my driving style, and we are seeing that with the decrease in lap times. Also, working with my dad and Mick Panigada from the factory, we have completed days of testing trying to learn the kart as much as possible. The Energy is very user friendly, and I am very confident heading to Las Vegas.”

With the championship on the line, Cook is within striking distance of taking the title. After scoring a third place result at the US Open of Dallas and a fourth place finish in the US Open on Colorado, Cook is only 124 markers in behind of the championship point leader. With an increased points fund available for the finale event, each on track position in every wheel-to-wheel session will count as the title will go down to the wire.

Cook added, “Of course I would rather be leading the points heading into the final event, but chasing is not a bad position to be in either. I know I need to be aggressive and be at the front of the field and that is my goal. From there, we will see what happens.”

As a multi-time race winner and champion, Sabré will continue her march through the karting ranks and up the motorsports ladder. Gaining experience with each and every race weekend to better herself for the future, Cook is one of the fastest females in motorsports and looks to prove that in Las Vegas.