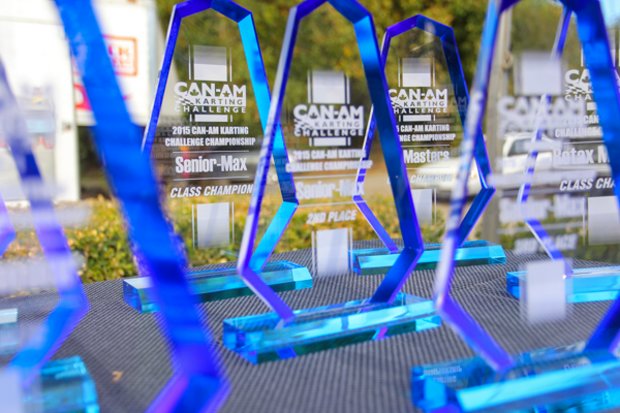 Invading the twists, turns and rolling hills of the Pat’s Acres Racing Complex in Canby, Oregon, the 2015 CAN-AM Karting Challenge closed out their third championship season in superb fashion. New for 2015, the series closed out the season with a new race format taking the championship chases all the way into Sunday’s Finals and it was met with great reception from the competitors on hand. Three days of exciting racing culminated with ten new champions and three drivers earning invitations to the much anticipated Rotax Max Challenge Grand Finals to represent their countries and the series at the ‘Olympics of Karting’, held this year in Portugal.

The Pat’s Acres Karting Complex offered up everything it was expected to and more, providing stellar racing on a racing circuit unlike any other in North America. Nestled deep in the woods just south or Portland, the seven-tenths of a mile track challenged drivers with quick transitions, elevation changes and tight confines.

On top of this weekends racing, the event hosted a very successful charity event for the Children’s Cancer Association with support from M Realty.

The series also announced a spirit award named after Sam Fries, a much loved member of the Pacific North West karting community who passed away earlier this summer. The Dezell family of Okotoks, Alberta was honored as the first winner of the award for their passion for everything about the sport of karting. 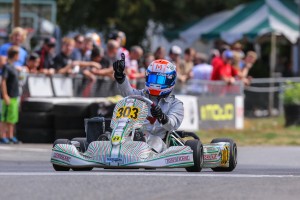 It was a perfect weekend for Portland native Luke Selliken in the Rotax Senior category. Competing only part-time at the CAN-AM in 2015, Selliken scored his first victory of the season at his home track of Pat’s Acres by simply dominating every on-track session throughout the weekend.

It appeared that a challenge would come from Joey Wimsett, who utilized a unique tire saving strategy in the heat races before charging from last to second in the PreFinal. However Selliken blistered off his fastest laps of the weekend in the opening laps of the Final to pull a large gap on Wimsett and the rest of his fellow drivers en route to victory.

After crossing the line in second, Wimsett surrendered his position at the scale line moving up Artie Carpenter to the second position, completing his championship run with another podium appearance, his sixth in seven races, and earning him the invitation to the Rotax Grand Finals in Portugal. Both Carpenter and Selliken will compete in Portugal with Selliken earning his ticket earlier this season at the Rotax Challenge of the Americas.

Making a one-off return to the class, Kyle Wick wound up third with Walker Hess and Derek Wang completing the top-five. 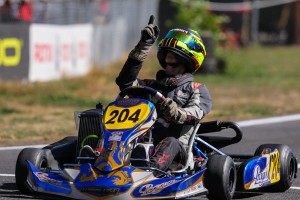 Championship contender Michael Michoff snagged the pole-position in Qualifying but that was all he could manage from Sting Ray Robb for the remainder of the weekend as the Boise, Idaho driver comfortably secured his sixth victory of the season and secured his second straight CAN-AM Karting Challenge Rotax Junior title.

With Robb already qualified for the Rotax Grand Finals, the race for second in the championship between Michael Michoff and Michael McCarthy decided who would be invited to Portugal.

Michoff kept his head on straight, avoiding any drama en route to a second place finish on Sunday, while McCarthy found trouble more often than not throughout the weekend, ending his chances at representing his country. For Michoff it will be his first opportunity to represent the Stars and Stripes at the Grand Finals.

Completing the top-five in the race was Hunter Melahn, Matthew Morgan and Annie Breidinger with Melahn leaping over McCarthy in the final standings as well to claim the third step of the championship podium. 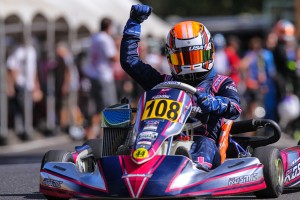 It was a great battle of three all weekend long in Mini-Max as Marco Kacic, Austin Torgerson and Hannah Greenemeier kept the audience on their feet every time they hit the track.

Kacic bursted to the outright pole-position in Qualifying, but he could only manage to convert in one of the heat races, struggling to hold onto the lead until the end in the other two, allowing Greenemeier to take heat heat one and Torgerson to claim heat three.

The three continued the excitement in the PreFinal that would eventually see Torgerson take the win until being accessed a penalty for contact with Kacic on the final lap, moving Greenemeier to the pole-position for the Final with Cooper Becklin lining up beside her after a great drive.

Things calmed down in the Final as Greenemeier was able to build up a lead early as Kacic battled with Becklin for second while Torgerson worked his way forward from fifth on the grid.

Leading the race from flag to flag, Greenemeier scored her first CAN-AM Challenge victory of the season in only her second start with Kacic and Torgerson joining her on the podium.

A challenging weekend for points leader Grant Langon ended on a high note as his sixth place finish was enough to hang on and take the title, earning him a free entry to the US Open of Las Vegas in October. 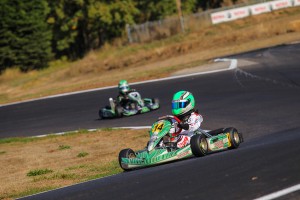 Leading up to Sunday it appeared that the Rotax Micro-Max race would come down to the wire as Championship leader Josh Pierson and contender Ashton Torgerson were neck and neck in all three heat races. Excellent passing, great driving respect and tight competition between the two showed great promise but it all changed on Sunday afternoon.

Saving his best for the Final, Pierson simply rocketed away from his competition when it counted most, eventually crossing the finish line by more than six seconds over Torgerson, who was left scratching his head.

For Pierson the win solidified his second straight CAN-AM Challenge Micro-Max title, earning him a free entry to the US Open of Las Vegas in October.

A great battle for third featured Ryan Dezell and Jason Leaung, two young Canadians who have enjoyed a very spirited battle all season long. Dezell used some strategy on his final pass to ensure he scored the final podium position while Tyler Kozma and Isabella Jaime rounded out the six competitors in the class. 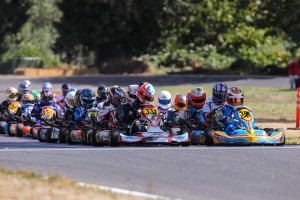 The grid at Pat’s Acres barely had enough room to fit all 34 drivers entered in the Briggs & Stratton LO206 Final. Jam-packed full of LO206 veterans, Rotax racers, former racers turned mechanics/driver coaches and karting newcomers, there was something for everyone and did they ever put on a show for the attendance on hand.

While it was Marco Eakins and Dalton Egger who led the way throughout the heats, Derek Wang joined the party up front on Sunday. A poor start for Eakins from the outside saw him fall outside of the top-five before the first lap was complete while Wang and Egger and broke free to create their own race with all kinds of action happening behind them.

Dust and dirt flew every lap throughout the order as drivers jockeyed for position and when the checkered flag flew it was Wang who came out on top, edging Egger at the finish line while Wang’s teammate Stepanova Nekeel emerged from the pack to score the third step of the podium. Eakins recovered to finish fourth with Aaron Neliton fifth, shifter driver Jacob Neal sixth, Cameron Egger seventh, Kyle Wick eighth, Jacob Blue Hudson ninth (the highest finishing junior) and Spencer Kunz tenth. 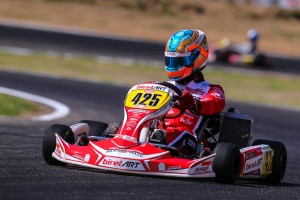 The CAN-AM Karting Challenged welcomed the Rotax DD2 category back for one weekend of action in 2015, offering up a ticket to the Rotax Grand Finals to victor. Disappointingly only three drivers showed up at Pat’s Acres to compete but honoring his invitation, series manager Mike Rolison still awarded the prize.

Canadian Alessandro Bizzotto and American Dev Gore made long treks across the continent to be a part of the event and the two sized each other up throughout the heat races with the addition on Joe Criscione.

After Gore pulled off very early in PreFinal to save tires, Criscione and Bizzotto eventually did too before the checkered flag flew in a strange run of events.

With all their focus on the Final the green flag flew. Bizzotto jumped out to the early lead while Gore had his hands full of Criscione. Pulling away while his competitors battled for second, Bizzotto set his BirelART machine into cruise control after building up a comfortable lead en route to the win and the ticket to the Portugal. Criscione eventually found his way by Gore but was unable to close the gap to the distant Bizzotto. 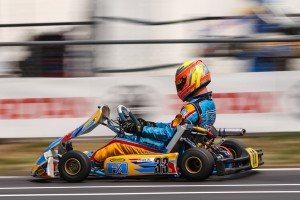 Utilizing the CAN-AM Challenge event to prepare for some upcoming Shifter races, Californian Jacob Neal cruised to victory in the S1 division of the Shifter race while Ben Johnston was the quickest of the S4 Masters drivers to win in his category of the race over Dave and Tyler Shepard.

With year three in the books, CAN-AM Karting Challenge officials are already busy planning year four. All four venues hosted excellent events and should return to the series in 2016. More information to come in the near future.