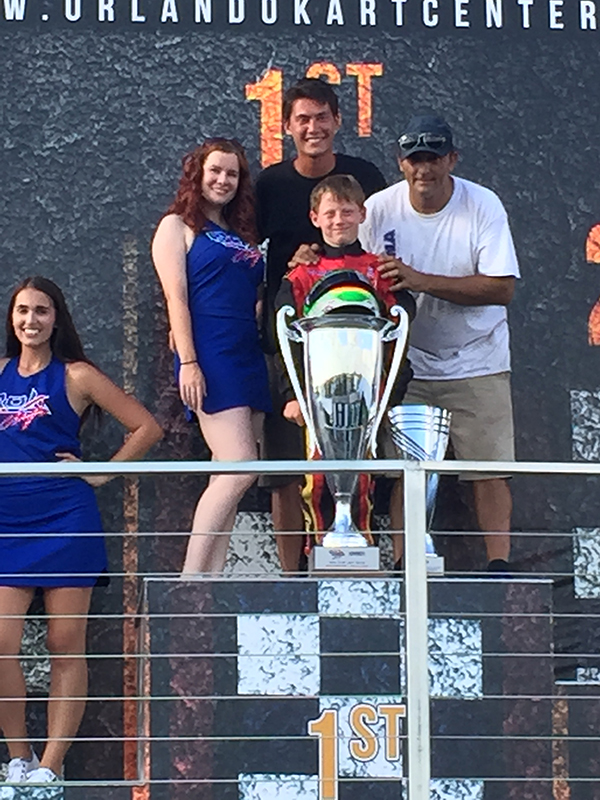 Jeremy Fletcher is all smiles as he is awarded the Vortex Micro ROK championship trophy this past weekend in Orlando
(Photo: Jerry Brown)

Team Felon / Tony Kart Driver Jeremy Fletcher ended his season on a high note, winning the fifth and final roundof the ROK Cup USA program held this past weekend at the Orlando Kart Center in Central Florida. With his strong performance over the weekend, the talented youngster also managed to secure the ROK Cup USA Championship.

Fletcher piloted his Bordogna Engine-powered Micro ROK Tony Kart to a first, second and third place finish in the first three heat races respectively, and he ended the prefinal in P4. Forced to start outside of the second row for the main event, Fletcher took the lead on lap four and never looked back, taking the checkered flag and wrapping up the ROK Cup USA Championship in his first year of national-level competition.

“We are so proud of Jeremy and his hard work all season long,” explained Jerry Brown. “He has been taught by some of the best and gained experience with each and every outing. His goal was to stand atop the Micro ROK class in 2015 and he has now accomplished that. We love to see the smile on his face.”

Fletcher’s primary sponsor,TheHolsterStore.com, is proud of his efforts and impressive results this year, his first year of national competition. They are looking forward to partnering with him for another successful season in 2016.

Fletcher’s family would like to thank Gary Willis and Chris Grektorp of Team Felon, who put in countless hours helping Fletcher to develop his talent behind the wheel. They would also like to extend a huge thank you to the ROK Cup USA Series for their professionalism and the effort put into an extremely well run series.