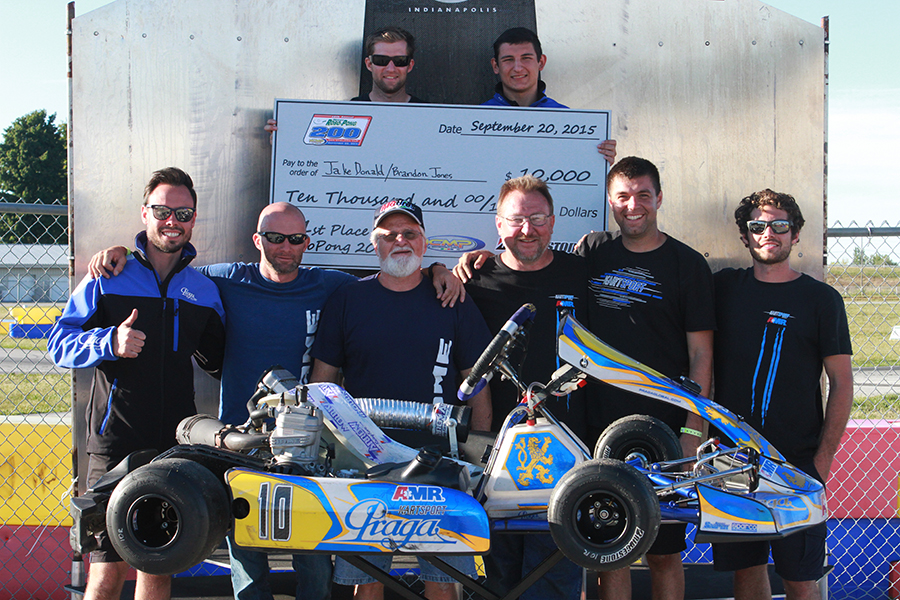 The 12th annual RoboPong 200 took place Sunday under perfect weather conditions around the New Castle Motorsports Park. Thirty-one entries battled for 200 laps around the 1-mile circuit in central Indiana, vying to place their name on the prestigious Dan Wheldon Cup. For the first time in the event history, it was about fuel mileage as the KartSport North America / AMR entry of Jake Donald and Brandon Jones kept up a blistering pace while making just three stops for gas put them out front for the victory and $10,000.

The race began with Checkered Motorsports / PCR two teams starting on the front row. Andrew Bujdoso, who qualified on the pole position, led for the first seven laps until getting demoted by the young Braden Eves (CompKart). Eves led a seven driver pack but was able to pull away. Eventually, he was joined out front by the Team Manchild entry with Brandon Lemke at the wheel of his Merlin. Lemke ran the quickest laps of the race chasing down Eves, posting a 1:05.046-lap as his best. The race came to an end for Eves and his teammate Derek Dignan when he lost power to his engine while leading on lap 36. Junk in the carburetor was the cause of a fuel supply problem and took them out of the running before the first pit stops. 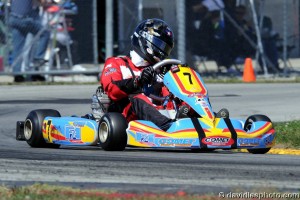 Lemke took over the point however, pulled in on lap 44 as he became low on fuel, handing the Merlin machine over to TJ Koyen. This put Donald into the lead, and they were able to stretch the first stint to lap 53 before pitting. Brandon Jarsocrak took the led for one lap until he ducked into the pit lane. Unfortunately, during the pit stop the spark plug wire was detached from the boot, forcing them a lengthy stop and loss of laps. When the pit stops rolled through, Ironman entry Jesus Rios Jr. held the lead aboard his iKart entry after stopping on lap 47 for fuel only. The new tires by Brandon Jones in the KartSport entry put him at a fast pace, eventually moving from third to first by lap 79. Koyen pitted from third on lap 92 for tires and gas, with Rios coming in on lap 98 for gas and rear tires. Jones stretched his stint to lap 104 before coming in and handing it off to Donald, with another set of fresh Bridgestone tires.

The cycle of second pit stops put Donald out front by 10 seconds over Rios, until lap 129 when the iKart machine went off course. A brake issue put the two-time SummerNationals winner on the sidelines, and out of the race. This and the fuel mileage issue with Lemke/Koyen put the CometKartSales.com entry with IndyCar drivers Josef Newgarden and Scott Dixon into the second position with Zach Holden/Ashley Rogero in third. 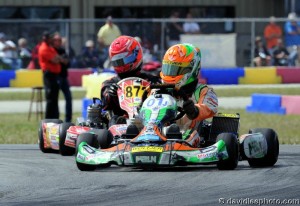 The ‘Manchild’ team of Brandon Lemke and TJ Koyen finished third, one lap down (Photo: DavidLeePhoto.com)

Holden was the first to pit on lap 151, giving Rogero their Tony Kart with four new tires and fuel. Donald ducked onto pit lane two laps later, and elected to stay in the Praga kart, receiving four new tires and fuel. Dixon came in on lap 155 as the leader to let Newgarden take the final stint with four new Bridgestone tires. It shuffled out to Donald leading by 32 seconds over Koyen, who needed to make one more stop for fuel. Koyen made it to lap 171 before he had to pit, giving the final 30 laps to Lemke with a short fill on gas. That put Newgarden up to second, however, unable to match the pace set by Donald. Completing 150 of the 200 laps, Donald took the checkered flag for his second victory, handing Brandon Jones his first along with the first for chassis Praga. The IndyCar duo of Newgarden/Dixon were 47 seconds back in second after three pit stops and 200 laps of competition. 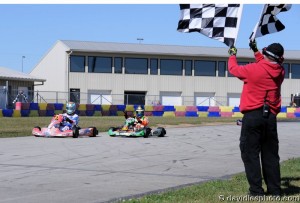 Lemke rejoined the race in fourth after their fourth and final splash and go pitstop, trailing Rogero by eight seconds with 30 laps remaining. Rogero drove the final laps with no brakes, and Lemke was able to reel her in. By lap 193, he was there and attempted to pass on lap 195, but Rogero slammed into the back of Lemke thanks to the brake issue. She graciously gave the spot back and continued on. Lemke/Koyen finished third, one lap down. In the final laps, Kyle Kalish in the Franklin Motorsports / Merlin entry tried to run down Rogero for the fourth position. Contact was made in the final corner, with Rogero crossing the line through the grass just ahead of Kalish.

Polesitter Checkered Motorsports / PCR of the Bujdoso brothers ran out of gas twice. Both times with Robert behind the wheel, the team was forced to make four stops for fuel struggling with fuel mileage, finishing three laps down in sixth. Former winners Ed Carpenter and Nathan O’Rourke stayed out of trouble and ran consistent laps to finish seventh, also three laps down. The youngest drivers in the field – Leo Stoia and Ben Varner – finished eighth in their first ever RoboPong event, four laps down. Rising Star Racing entry of IndyLights champion Spencer Pigot and Pro Mazda Championship driver Neil Alberico battled brake issues to end up ninth. Completing the top-10 were veterans Brandon Adkins and Mike Giessen in their Adkins Speed Center / Merlin entry. A flat tire put them in the pits during the first stint, putting them behind early but battled back to end up five laps down. 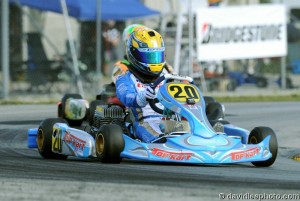 Zach Holden added a victory to his resume, winning in his Yamaha Senior debut. A stout 21-driver field battle for 30 laps in the morning hours. Saturday Prefinal winner Dakota Pesek (Top Kart) started on the pole position, but it was Holden (Tony Kart) and Emerson Reed (Merlin) working together to get the top two positions, and pull away. A large group, including Pesek fought lap after lap to hold the third position, with no one working together. The top two stayed glued, pulling away lap after lap. The driver on the move however was veteran Eric Jones, piloting a Praga. A clutch issue slowed his pace in the Prefinal, and the overnight adjustment made him the fastest kart on the track. He came from 11th to join the tail end of the P3 fight group quickly. He made his way through the field and reached third by lap 10. No one would work together, as position changed through the next 13 laps until Jones and Mick Gabriel (Tecno) hooked up and pulled away from the group. Out front, Reed took the lead on lap five, and led until the final lap. Reed drove down the inside, but left enough room for Holden to slip alongside. Holden held the position through the final corner, and scored the victory. Jones held off Gabriel for third with Pesek completing the top-five.

The Yamaha Junior feature followed, with Holden running that as well. Changing his tires and removing 40lbs. of weight, he lined up third behind Brandon Lemke (Merlin) and John Paul Southern Jr. The top two locked up like they did in the Prefinal, and drove away from the field. Lemke led the majority of the race, with Southern taking over the point just before receiving the white flag. He was able to gain about five kart lengths over Lemke in the pass, holding it through the final circuit to earn the victory. Cadet graduate Sam Mayer (Merlin) and local driver Zach Pretorius (FA Kart) worked past Holden on the final lap for third and fourth. 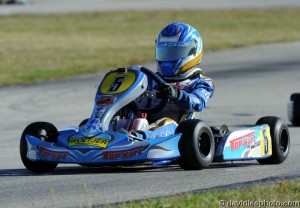 The Yamaha Cadet Final was very similar to the Saturday Prefinal. Jason Welage (Top Kart) and top qualifier Kaden Wharff (Tony Kart) set the pace for the 30-lap final. Welage led all 30, as Wharff remained on his bumper and was unable to work past on the final lap. Sam Mayer (Merlin) ran third, unable to catch the leaders with a draft partner. Nic Sheppard (Tecno) was fourth at one point, but a group of drivers caught him with 12 laps to go. They battled to the checkered flag with Kyle Thome (Merlin) earning fourth with Luca Mars (CompKart) fifth.

Visit the EKN Paddock Insider for notes, photos and videos from the weekend and also review the Saturday report that includes a recap of the Dan Wheldon Memorial ProAm Karting Challenge.