2015 championships to be decided for Superkarts! USA regional program on growing street race in Southern California 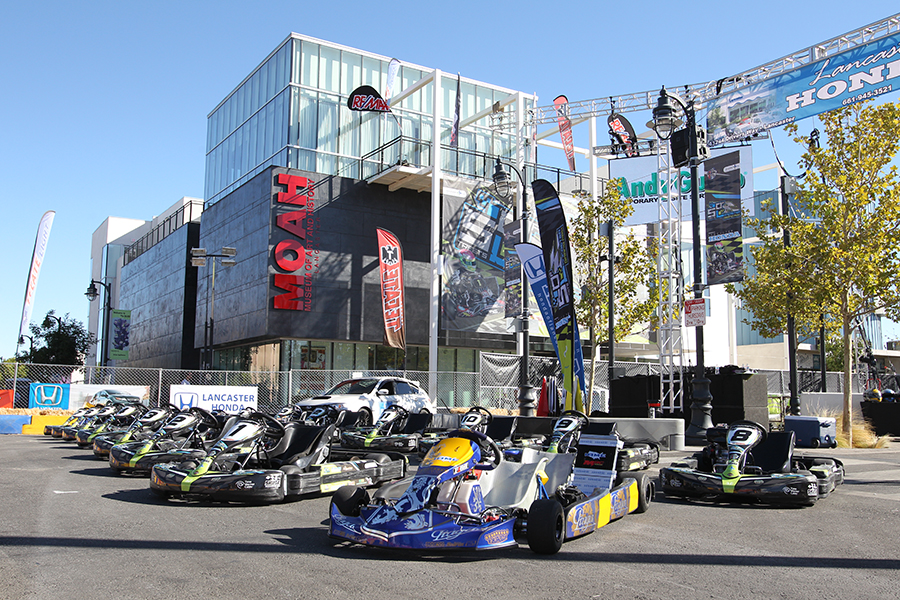 The Streets of Lancaster Grand Prix is set for September 25-27, with two days of competition on the city streets for the California ProKart Challenge (Photo: DromoPhotos.com)

The California ProKart Challenge will complete its 2015 season at the annual Streets of Lancaster Grand Prix. For the fifth straight year, Superkarts! USA is partnering up with the City of Lancaster to promote and host the only major street racing for karting in the western half of the United States. Racers from all across the country, along with Canada and Mexico, will travel to the southern California city, located north of the Los Angeles metropolitan area. The event format is unique compared to the other California PKC weekends, with the race taking place over two days — scheduled for September 26-27. Practice, qualifying and one round of heat racing takes place on Saturday, while the second heat and Main Events highlight Sunday.

The City of Lancaster makes the event a festival surrounding the race on the city streets. A number of events and special programs take place during the three-day weekend, which can be viewed at the Streets of Lancaster Grand Prix website. The City hosts VIP races throughout Friday and Saturday evening for special guests and sponsors of the event, as they get to battle on the same circuit as the SKUSA competitors. A discount card will be available for the drivers of the Streets of Lancaster Grand Prix at a variety of BLVD businesses. All competitors and crew members are also invited to the Cure a Child party Friday night at the BeX Bar & Grill at 7:30pm and the event party Saturday night at the Museum of Art & History (MOAH) at 8:30pm. Sunday, during the podium ceremonies, the City will announce the winner of the 2016 Streets of Lancaster Grand Prix Scholarship program. Carter Williams was the first recipient, with Austin Elliott representing the event throughout 2015.

The SKUSA competitors will also be wrapping up the championship chases in Lancaster, with the sixth and final round to decide this year’s title winners. The Vemme Kart/Extreme Karting S1 Pro Stock Moto championship is still up for grabs heading into the California PKC finale. S1 rookie Jarred Campbell won last year’s event as an S2 driver, and leads two-time defending series champion Billy Musgrave by roughly 100 points when factoring in the drop. Musgrave came up short at last year’s SOLGP feature, finishing third to Campbell and veteran Ron White for the overall win, while placing runner-up to Fritz Leesmann in 2013. Kolton Griffin, Matias Podboj and Ryon Beachner are in a fight for the third step of the championship podium.

Christian Brooks enters Lancaster as the championship leader in the Phil Giebler Racing TaG Senior category. Three wins in five rounds gives the TaG Senior rookie a 153-point advantage over Streets of Lancaster Grand Prix Scholarship driver Austin Elliott. The NorCal driver will need a perfect two days on the city streets to help his chance at the title, and celebrate a great year representing the event. Carter Williams, the 2013 recipient of the SOLGP Scholarship, has locked up the title in the Ryan Perry Motorsport S2 Semi-Pro Stock Moto division. Four feature wins in five events, including eight of the ten heat races, puts him well out in front of the championship chase. The fight for second includes five drivers, as Jack Freese currently leads Matt Koerner, Marco Eakins, Henry Morse, and Don Whittington. The results from Lancaster will decide just who joins Williams on the championship podium. 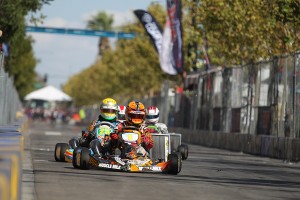 Jarred Campbell will look to defend his victory in the Stock Moto headline category from last year (Photo: DromoPhotos.com)

The SwedeTech Racing Engines S4 Master Stock Moto title is far from being decided, as the top two drivers from last year’s Streets of Lancaster Grand Prix do battle again. Defending series champion Darren Elliott holds a 155-point lead over defending SOLGP winner Rob Logan. It was an emotional victory for Logan, besting the veteran in the streets. Elliott has the advantage in the win column for 2015, winning two while Logan has the momentum by winning the last round at Adams. The fight for the final championship podium position includes Willy Musgrave, Robert Marks and Mike Mantel. Aaron Schmitt has the Professional Kart Support S3 Novice Stock Moto championship locked up. Four wins, including the last two rounds, gives Schmitt a solid advantage in the points – all that remains is a Streets of Lancaster GP victory to close out his S3 career. Robert Heck Jr. has a solid advantage for the second position, with Cory Ormonde and Matthew O’Donnell in a battle for the third spot.

The series title is also a lock for Callum Smith in the Sanner Racing S5 Junior Stock Moto division. Smith has four wins on the season, seeing his win streak come to a close at Adams last month. The focus now is solely on earning a first Streets of Lancaster GP victory, and then on the SuperNationals XIX in November. Noah Grey currently holds the second position in the standings over Hunter Kelly. The chase in the new 2Wild Karting S4 Super Master Stock Moto class could go down to the wire. Ken Schilling leads the standings over Adams winner Kalvin Chen. The gap is just 68 points when factoring the drop. Schilling is returning to the site of a wild ride during an incident at last year’s SOLGP.

Two drivers remain nearly locked at the top of the Mike Manning Karting TaG Master championship chase. Brian Phillipsen is coming into the Streets of Lancaster Grand Prix riding on a three-race win streak, helping to close up to point leader Vatche Tatikian. The two will settle the title on the city streets. The gap is just 29 points in the Nash Motorsportz TaG Junior title chase between Nicky Hays and Trey Brown. Hays has two wins to Brown’s single victory, but two runner-up finishes by Trey has the points tight going into Lancaster. Five drivers are separated by just 100 points for the third spot, including Round Four winner Jagger Jones, Dante Yu, Hannah Grisham, Ethan Barrett and Colby DuBato.

Anthony Willis has led the Leading Edge Motorsports TaG Cadet championship since the opening round at Buttonwillow. The advantage is 164 over Round Two winner Oliver Calvo. Willis was the best finisher of the two at last year’s event, placing seventh.  Leading Edge Motorsports TaG Cadet Rookie has four drivers within 150 points of each other. Aiden Kempf has yet to win this season, but holds the championship lead. George Diakoumopoulos won Round Two, and currently sits second ahead of Round Five winner Bryce Stevens and Round Four victor Cole Shade.

Online registration for the Streets of Lancaster Grand Prix remains open until Tuesday, September 22 at midnight – with the discounted price of $405 for entry and stamped race tires. Pit move-in begins on Friday, September 25, and pit spot reservations are highly recommended, as this is expected to be a packed event. The PKC registration desk will also be open for check-in and walk-up entries on Friday. The host hotel is the Oxford Suites, with special rates when you mention ‘Streets of Lancaster’ as the group or event name. More information regarding host hotels and spectator tickets, in addition to complete race and venue information, can be found at the California PKC Event Page. SKUSA is also encouraging new and returning members to make sure they have an active membership and license to race, along with their pre-approved race number. Competitors are also responsible for bringing their own fuel, and SKUSA encourages all racers and teams to get in touch with their local VP distributor in preparation for the event.