EKN’s Paddock Insider is a new Trackside coverage addition, bringing you notes, updates and breaking news as it happens. The article will be a timeline of events as they happen during the 2015 RoboPong 200. The information will not be seen anywhere else, including interviews and photos. Please feel free to comment and discuss our coverage and today’s action in the EKN Global Members Discussion area below:

Lap 185 – Donald leads by 48 seconds over Newgarden, only two karts on lead lap

Lap 179 – Bujdoso runs out of gas again, drops out of top-five

Lap 171 – Koyen pits for their fourth time, hands kart over to Lemke

Lap 160 – Donald leads by 32 seconds over Koyen with Newgarden in third, four teams on lead lap

Lap 155 – Dixon pits holding the lead to hand his CometKartSales.com entry over to Newgarden with four new tires and fuel

Lap 154 – Kalish pits for his final time, stays in the kart with four new tires and fuel

Lap 153 – Leaders pit, with Donald staying in for a third stint, getting four new tires and fuel

Lap 115 – Donald leads over Rios by 10 seconds, five teams on the lead lap

Lap 104 – Brandon Jones pits for gas and four tires, hands the lead back off to Jake Donald

Lap 98 – Rios pits for gas and only rear tires, limping around with some cramping

Lap 44 – Lemke pits, hands over to Koyen with only a refuel

Lap 36 – Eves off with fuel supply issue, hands lead over to Lemke

Lap 20 – Top seven within three seconds of each other, Eves continues to lead

Lap 1 – Holden and Rios get together at Turn 3, both continue, then Lap 4 Rios gets put off course by Kalish in inner hairpin 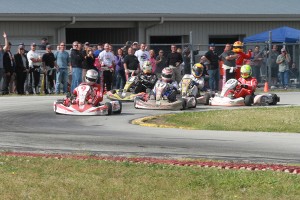 Dixon / Target Team Wins Dan Wheldon Memorial ProAm Even with heavy rain falling, the fans in the Indy area came out to see their favorite IndyCar drivers do battle for the 3rd annual Dan Wheldon Memorial ProAm Karting Challenge. Seventeen teams of four drivers battled in four separate 15-minute heat races, with the professional drivers finishing off the event. The final heat kept the fans on their feet, with two large packs forming. Marco Andretti led at one point, but was shuffled back in the field and eventually flipped his machine after going off course. Andretti flipped the kart back over, stomped out a grass fire, started the kart and jumped back in the race to the roar of the crowd. Out front, Matthew Brabham led in the AFS/STELLRECHT entry on the final lap. A group ran him down and attempted a pass down the final straight. Three-wide action allowed four-time champion Scott Dixon to move his Target entry from fifth to first, crossing the line for the victory. Brabham held on for third as Will Power slipped past for the second spot in the Firestone #1 machine. In total, the event raised nearly $200,000 toward the Dan Wheldon Fund and the Justin Wilson Family. Here Comes the Sun After 1pm, the track finally open to karts as the Dan Wheldon Memorial ProAm Karting Challenge competitors began their quick practice sessions before gearing up for their one hour, four-driver team endurance event. The clouds continued to push away, and the sun began to creep out, gearing up for solid weather conditions to allow the RoboPong competitors and the support classes with a warm-up prior to going out to qualify. 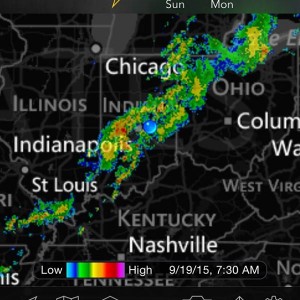 The start to Saturday was delayed, thanks to a storm that rolled through this morning. No on-track activity has taken place as of noon, including the Dan Wheldon Memorial ProAm event. The autograph session is about to take place, with their event to get going as soon as the track is drivable. RoboPong teams have taken the off time to weight their karts, and make sure everything is set for the qualifying session that will go on later today.

The 2015 RoboPong 200 kicked off with a full day of practice. The day was broken up by some heavy rain at one point, but the New Castle Motorsports Park track opened up the circuit to a later time to help make up for the lost laps that racers could enjoy. Final entries came in at the beginning of the day, with a few late moves to round out the 200-lap endurance race field, along with the three Yamaha and Mini Swift support classes.

For the RoboPong competitors, it was a chance get the karts set up for the long haul. Baseline set-ups, working with two or three different drivers depending on the team. It’s also a time for those without a lot of seat time on the year to get back on the horse, including the many IndyCar drivers scheduled to compete. A complete entry list of all the teams along with the four support classes will be posted here on the Paddock Insider.