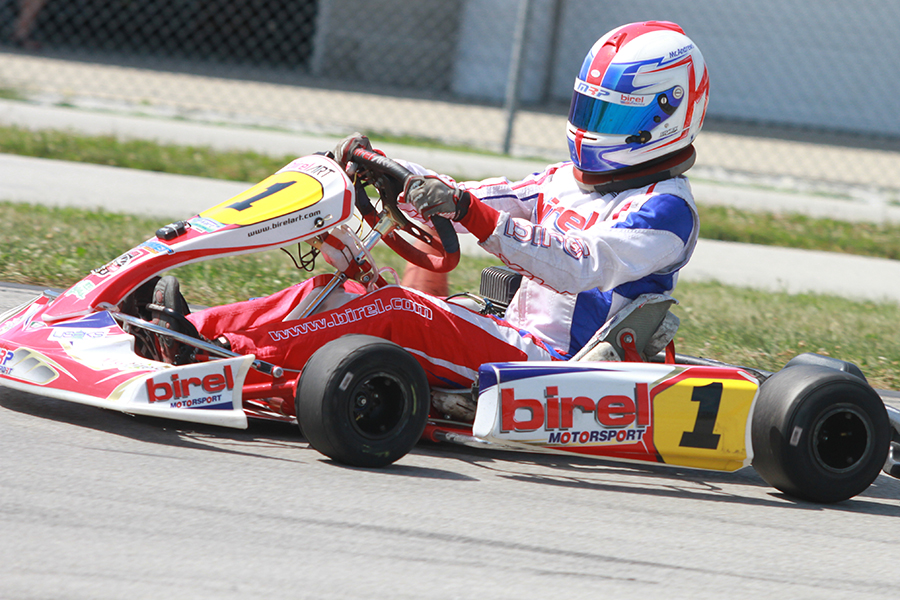 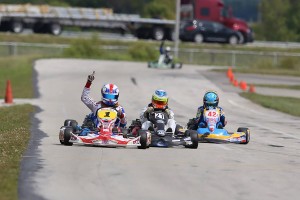 McAndrews came from 17th to 1st at the USPKS New Castle finale to claim the title (Photo: Kathy Churchill – USPKS)

The transition from the Junior ranks to the Senior level can be an easy change or a difficult move. Drivers moving up in the Yamaha category, the adjustment is simple with the lap times actually slower and the kart heavier then what they experienced in the Junior level. BirelART driver Mike McAndrews took to the change quickly, putting himself in the hunt at the opening United States Pro Kart Series event in Mooresville, North Carolina. McAndrews then propelled himself into contention for the championship with his first series victory at US Air Motorsports Raceway in June.

USPKS hosted the second half of the season in August, visiting first the Michiana Raceway Park. For the last few seasons, McAndrews has called the circuit home as the facility houses the MRP Motorsport operation. The young McAndrews helped to driver coach during the summer months for its racing school. Mike emerged victorious on the weekend. Saturday’s round of racing, McAndrews ran inside the top-three in both heat races, and then led all 24 laps of the main event. Sunday was very similar, with McAndrews winning the second heat and starting the feature on the front row. This time, it was a battle to the end, fighting off point leader Dakota Pesek and Derek Dignan for his third victory of the year.

The series finale took the series to the New Castle Motorsports Park once again, with McAndrews and Pesek locked at the top of the championship standings. McAndrews struck first, earning 10 bonus points with fast time in Saturday qualifying. He extended the championship lead with a heat win and runner-up in the second. The top two championship contenders found themselves battle for the win in the Final alongside Dignan. At the checkered, Dignan was able to take the checkered with Pesek ahead of McAndrews. The two rivals made contact, which resulted in a penalty for Pesek and moved him back to third behind McAndrews. The results made the gap 80 markers in the favor of McAndrews. 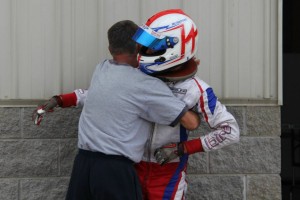 Pesek knocked it down to 70 after Sunday qualifying, earning the 10 bonus points for fast lap. During the Prefinal, the two championship rivals found each other. Contact was made once again, this time with McAndrews as the aggressor. Both dropped back down the order, however, after the penalty Pesek gained 15 more points on McAndrews, who was classified 17th for the main event grid. The championship broke down to McAndrews needing to fight his way into the top three should Pesek win the main event to claim the title.

With a solid field of drivers, climbing onto a podium position from nearly dead last seemed to be a daunting task. McAndrews was up to the challenge, and proved it right away by working into the top-10 by the end of the opening lap. In just a few more circuits, Mike was into the top five and inching closer to the leaders and keeping Pesek in sight. Both Pesek and McAndrews put themselves in position for the win as the race reached the end. Pesek took over the lead before the white flag with McAndrews right there in the hunt. The wildcard on the final lap was local driver Jimmy Simpson. The former IndyLights driver went from third position, past McAndrews and tried Pesek at the I-70 corner. Simpson ran Pesek wide on the exit, slowing both their speed. This gave McAndrews the opportunity to slip past both on the inside, and won the drag race to the checkered flag. The fourth victory of the season clinched the Yamaha Pro championship for McAndrews, his second USPKS title after winning the Leopard Semi-Pro crown in 2013.

McAndrews has also sampled the TaG side of the Senior ranks in 2015. Mike filled in for an injured Darin Marcus at the USPKS Shawano event aboard a Fullerton chassis. McAndrews was able to score a heat race win, the first for the brand developed and designed by karting legend Terry Fullerton who was there to witness McAndrews performance. He would end up finishing inside the top-10 as the weekend concluded. McAndrews returned to drive a Fullerton at New Castle in the Leopard Pro division, placing a best 10th in Sunday’s Final.

McAndrews will close out the 2015 season by piloting a Fullerton at the Superkarts! USA SuperNationals XIX in November, racing in TaG Senior. He is also working up funding to compete at a select few Skip Barber events to help begin an open wheel career. Next year’s plans are still open, however, a title defense for the USPKS Yamaha Pro is on the horizon. 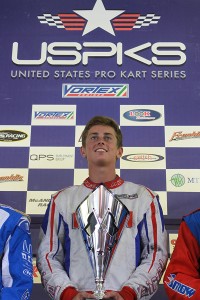 Chassis: Birel, Fullerton
Engine/Engine Builder: Switch Racing Engines
Sponsors: MRP Motorsport, Switch Racing Engines, Racersites, Gen 4 Karting, L&T Clutches, Karts Ltd., Badger Trailer Sales
Series You Compete In: Superkarts! USA, United States Pro Kart Series, Route 66 Sprint Series
Years Karting: 12
How did you get started in karting? I was a third generation driver, I think that explains itself.  My father and grandfather got me in a kid kart at age five and I have been hooked ever since.
What has been the high point in your racing career? Winning the 2015 United States Pro Kart Series by coming from seventeenth position to win the final race of the season, leaping to first in the points standings.
What are your goals in racing? Make a professional career out of it, whether I have to go to college and get a degree to work back in the shop or in the drivers seat.
In a few words, how would you describe your driving style? Meticulous, explicit
Funniest moment at the race track? Tim O’Donnell and his always funny jokes!

What do you do when not at the track? Think about being at the track, go to school, and work
What are your goals outside of karting? Go to college and get a degree
What type of street car do you drive? 1995 BMW M3 / 2003 Kia Spectra (Winter Beater)
What type of street car would you like to drive? Ferrari F40
What are your pet peeves or things that irritate you? Loose steering wheel, when drivers wreck you for no reason
What do you think could be done to improve the sport of karting?  More father son teams.  I haven’t been in the sport long compared to many others, but even I can tell the nature of the sport has gone a different way because of daddy’s with lots of money and big teams.
What are your favorite aspects about the sport of karting? The competitiveness.  Anyone can do well with the right work ethic.