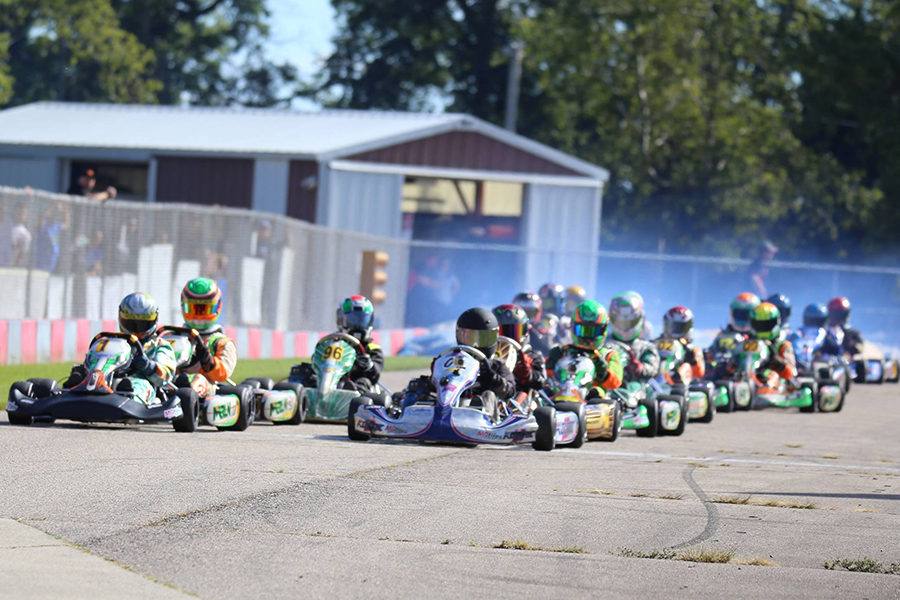 The Route 66 Spring Series closed out its 15th season with the final two rounds of 2015 over the September 11-13 weekend. The Badger Kart Club hosted the series at the Briggs & Stratton Raceway Park in Dousman, Wisconsin, welcoming nearly 250 entries during the two days of racing. The five event, 10-round championship chase came to an end for the 10 categories, with racers continuing their win streaks while others earned their first of the season to end the year on a high note.

With the championship title going down to the wire, Armin Cavkusic disrupted the contenders by claiming both victories in the Franklin Motorsports Leopard Senior division. Cavkusic scored a double win weekend in South Bend with a dominant performance. Each of his wins in Dousman were hard fought. Title contenders Kindra Hurlbert and Colton Ramsey each sat out the weekend due to medical conditions. They were provided substitute drivers, with veteran Mike Giessen driving for Hurlbert and rising star Brandon Lemke in place for Ramsey, recovering from a hard wreck at New Castle last month. Lemke took fast time in qualifying to start out the weekend, with Giessen fighting back for the Prefinal win. Cavkusic ran fifth in the race, but quickly established himself as a contender in the main event. By lap four, Armin took the lead from Giessen and showed the way to the checkered flag. Lemke was able to work past Giessen for the second spot with Anthony Granata and Emily Hurlbert completing the top-five. 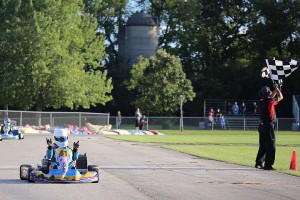 Cavkusic started Sunday’s racing off with fast time in qualifying. He was shuffled back in the Prefinal however with title contenders moving past, including Josh Hotz to drop him to fourth. Giessen led the majority of the main event until a broken header slowed his pace. This allowed Cavkusic to close in as the checkered flag neared. Armin took over the lead with two laps remaining, going on to score his second victory of the weekend. Giessen placed second, but was removed from the results for the broken header. Contact between Hotz and Lemke for third took Hotz out of the race, and dropped Lemke out of the top-five, moving Jamie Sieracki to the second position in his return to the seat. Anthony Granata ended up third with Mark Vielgut and Emily Hurlbert making up the top-five.

The RLV Yamaha 100 Senior championship was all but wrapped up for TJ Koyen entering the weekend, but the stars of the event were Brandon Lemke, who earned his fourth victory of the year, and Josh Fierke took his first since the opening weekend in 2014. Collin Griffin was the driver to beat throughout Saturday’s round of racing. The Round Seven winner set the pace in qualifying and won the Prefinal. Leading the Final, Griffin was run down by Lemke, and lost the top position as they received the white flag. Griffin tried a move for the lead on the final lap, but locked up the brakes and spun. Lemke went on to score the victory. Kyle Gluth finished second in his best finish of the year, one spot ahead of Koyen. Fierke ran to his best result of the season to fourth with Adam Crepin fifth. 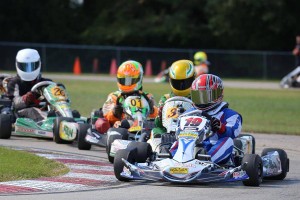 Josh Fierke returned to the front of the Yamaha Senior field, winning his first Final since the 2014 opening weekend (Photo: Kathy Churchill – Route66kartracing.com)

Griffin returned to the top spot the following day as he set the fast lap in qualifying for the final round. Unfortunately for him, the engine lost all compression on the cool down lap, forcing him to change motors and start from the tail of the field in the Prefinal. That allowed Crepin to advance forward and score the race win. He was joined at the front of the field in the Final by Lemke and Fierke. The trio put on a great showing, exchanging the lead numerous times over the 16 laps. On the final circuit, Fierke was able to emerge as the leader and went on to score his first victory, capping off his best weekend of the season. Lemke was second with Koyen and Gluth slipping past Crepin late in the race as the top-five all finished within six tenths of each other.

Alex Bertagnoli and Sam Mayer split the four victories in the Junior ranks on the weekend. Bertagnoli locked up the CKT Racing Engines Leopard Junior title on the weekend with his sixth victory of the season on Saturday. Mayer, making his Junior debut, set the pace in qualifying and the Prefinal. He and Bertagnoli went back and forth for the lead in the Final, with Alex scoring the victory by over a second with Porter Weisensel in third. The two set the pace throughout Sunday, with Mayer sweeping the day for his first Leopard Junior victory. Bertagnoli kept it close, coming just 77 thousandths short at the line in the Final, with Weisensel once again third. 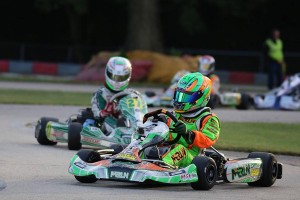 Alex Bertagnoli locked up both Junior championships with a win in each category on Saturday (Photo: Kathy Churchill – Route66kartracing.com)

Bertagnoli added a second title with a victory in Woltjer Racing Engines Yamaha 100 Junior. Alex scored the win in Saturday’s round of racing. Stealing the Prefinal win from top qualifier Michael Paterno, Bertagnoli went wire-to-wire in the Final for his fifth victory of the season. Championship contender Dillon Schwanbeck was a close second, back by 34 thousandths at the line. Rookie Mayer drove to third with Stephen Dial pushing Paterno back to fifth. Paterno came back Sunday with the same speed that put him toward the front the day before. Michael clocked in the fast time in qualifying, and drove to the win in the Prefinal. Mayer finished second, and from the outside of row one, took the lead to open the Final. Sam led all 16 laps to take his first Yamaha Junior checkered flag. Bertagnoli kept the pressure and was behind by 84 thousandths of a second. Paterno was dropped to third, with Schwanbeck fourth and Riley Yates fifth.

The Express Karts & Parts Komet category saw Stephen Dial celebrate the class championship with another double win weekend. Michael Paterno set the fast time in qualifying on Saturday, with Dial coming through for the Prefinal win. Dial led all 16 laps in the Final for victory eight of the year. Paterno and Ryan Weyer completed the top-three. Paterno continued to fight strong, landing the P1 position in qualifying on Sunday, and fighting off Dial for the win in the Prefinal. Paterno led the first half of the Final before Dial took over and went to take his ninth checkered flag of the season. Paterno ran second with Kyle Gluth in third. 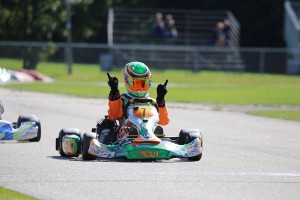 Tristan Farber continued the momentum from an exciting first victory at New Castle in the Switch Racing Engines Yamaha Cadet division, and carried it into Dousman to earn a second straight. Farber did it again, coming from the ninth position and working his way forward. With three laps remaining, Farber took the lead and held on the final circuits to score the victory. Taylor Maas drove to second with top qualifier Kyle West third. Prefinal winner Kyle Thome was shuffled back to fourth with Talan Drake fifth. Day two was for JJ Hansen to shine. Hansen edged out top qualifier Kyle West for the Prefinal win by 43 thousandths of a second. He then went on to fend off challenges by Preston Lemm and Thome to earn his first victory. West ended up second over Kyle Janssen. Lemm and Maas completed the podium.

Kyle Thome drove to his second victory on the season in the Haddock LTD/Comet Kart Sales Komet Cadet class, while Talan Drake became a first time winner on Sunday. Thome swept the day on Saturday, posting fast time in qualifying and winning the Prefinal before beating Farber to the checkered flag by just 39 thousandths of a second in the Final. Taylor Maas was third ahead have Parker Abed and JJ Hansen. A number of drivers were in the hunt on Sunday. James Lynch started off with fast lap in qualifying, while Farber edged out Thome for the Prefinal win. All three were relegated down the order by Drake in the Final. Coming from outside the top-five at the start, he inched his way up to the front, stealing the lead on the final lap to score the victory. Thome was a close second, with Abed ahead of Hansen and Lynch for third. 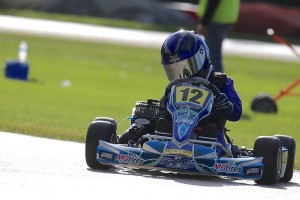 The KartLift Yamaha 100 Rookie class was among the most populated categories on the weekend, welcoming two new winners. Keegan Bosch was able to lead all 16 laps in the Final for his first victory of the year. Bosch, after winning the Prefinal, led by seven tenths of a second over Conner Churchill at the checkered flag. Top qualifier Zach Collins was third over Bryce Mersberger and Nicholas Terlecki. Sunday was similar, with Collins once again posting fast time in the qualifying session. This time, Churchill stood out in the Prefinal and Final to score his first victory of the year. The race for the main event victory was close, with Churchill and Collins going back and forth all 16 laps. At the line, it was Churchill by 77 thousandths of a second. Bosch drove third with Camrin Cass and Terlecki making up the top-five.

Camrin Cass and Zach Collins also earned their first wins in the Tony Kart Micro Rok category. Cass was able to win the Prefinal, and battled hard for the victory in the Final. Nicholas Terlecki led half the 16 laps, with Cass leading the other half, including the final circuit as he reached the line first by 54 thousandths of a second. Top qualifier Keegan Bosch was third with Collins fourth and Aidan Hinds fifth. Collins came back on Sunday to edge out Bosch for the fast time in qualifying by just 13 thousandths of a second. Bosch got the better end of the fight in the Prefinal, beating Collins to the line by just 58 thousandths. Collins won the war, declared the winner in the Final. The first 15 laps were controlled by Collins, with Bosch making a last lap move. Contact was made and Bosch was able to cruise to the stripe first, but was penalized for the contact. That promoted Collins to the top step of the podium, his first trip on the season. Bosch was classified second with Hinds third. Dylan Julien and Terlecki completed the top-five. 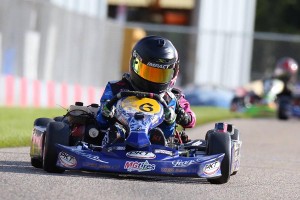 Adam Brickley completed his perfect score in the Hollywood Crane Service Kid Kart division on the year. Brickley won the eight feature races in the eight rounds he competed in. The weekend was not a sweep, with two drivers putting on the pressure to the eventual champion. Logan Julien opened up the weekend, nipping Brickley out for the fast time in qualifying by just three thousandths of a second. Brickley then fought off Sofia D’Arrigo in the Prefinal by 91 thousandths, and increased the gap to seven tenths in the Final. Hugo Bonjour was third over Julien and Austin Olds. Brickley set fast time in Sunday qualifying, only to have two-time race winner Indy Ragan slipping past on the final lap of the Prefinal to win by 22 thousandths. Ragan led the first half of the Final, until Brickley took over and went on to edge out D’Arrigo by 73 thousandths at the checkered flag. Ragan slipped to third with Kruze Miles fourth and Austin Olds fifth.

Precision Karting Technology (PKT) provided 10 certificates for the weekend, with 10 lucky drivers earning them during the driver’s meeting. Two sets of MG Tires were also awarded during the gathering, with Stephen Dial and Riley Yates winning a set each. A complete championship review will be published in the coming days, along with information about the 2015 season year-end banquet on November 7. For more information on the Route 66 Sprint Series, head to route66kartracing.com.