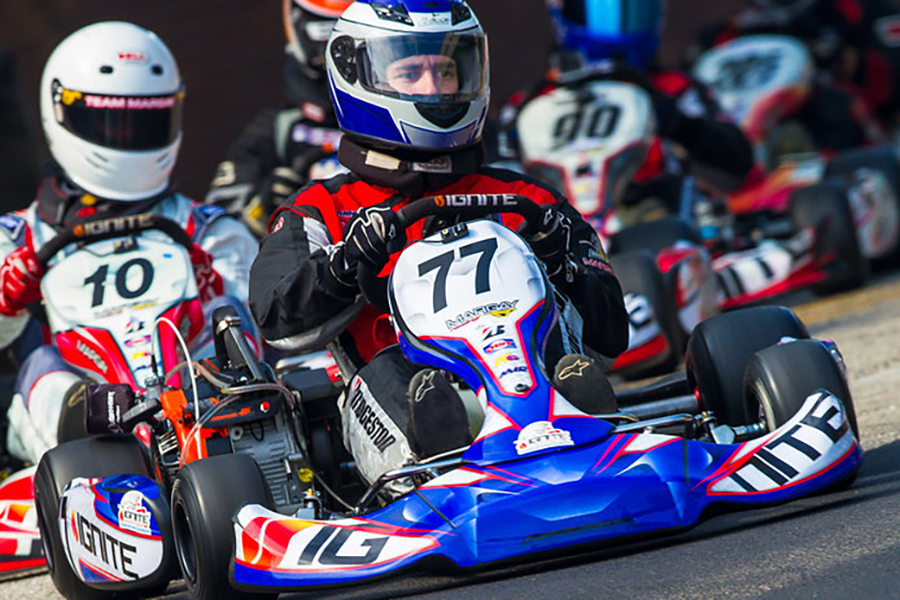 Sixteen drivers lined the grid for the inaugural Ignite Shootout held during the 2015 edition of the Rock Island Grand Prix on September 5-6. The entry list saw former sports car drivers, previous karting champions and new racers looking to learn and progress throughout the weekend.

After getting comfortable with their equipment Friday afternoon, drivers and crew were led on a track walk by RIGP veteran and Shootout mechanic Jason Birdsell. Racers were shown the tips and tricks on the 6/10th mile street course and began preparing to do battle the following morning. 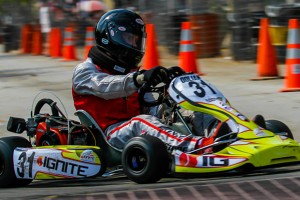 Hosting a new format for 2015, Saturday featured two familiar practice sessions and the addition of a heat race in which drivers would pea picked for their starting positions. In the first Practice, Missouri driver Jeremy Remick set himself atop the charts with a 40.981. Former shifter kart driver Chris Prey, RIGP regular Nick Todenhaupt and EKN Editor David Cole followed suit with Austin Blair rounding out the fast five. As drivers started to push the limits for the second practice, new names found their way to the top. David Cole set the new standard with a blistering 39.615. Keith Scharf could only manage a 40.356 followed by Remick, Ryan Bettenhausen and Austin Blair.

The pea pick Le Mans style standing start saw David Lawrence start from pole position. Jeff Dolian got the jump off the line, and led the field to their first green flag of the weekend. David Cole slid into second, followed by Dudici and Lawrence. After Dudici fell victim to a turn two exit barrier, Keith Scharf was up to third from his twelfth starting position. Al Cram fell in line behind Cole and Scharf as they began to hunt Dolian at the front. On lap four, Cole was also swallowed by the barriers, moving Scharf to second. Jeremy Remick was able to make pass after pass, lap after lap to move into third position on lap 8 from his last place starting position. In the end, Dolian’s pace was too much, as he set fast lap of the race with a 39.419 to claim a 6.017 victory over Scharf and Remick. Cram and Bettenhausen rounded out the fast five.

After the Rock Island crew tallied the passing totals with the heat grid positions, the main event grid was set with Jeremy Remick and Keith Scharf making up the front row. When the green flag flew, it was Dolian getting the jump again, leading the field to the green flag on the opening circuit followed by Scharf and Remick. Bettenhausen and Todtenhaupt remained in the lead draft. The top 5 remained unchanged for two laps, until Bettenhausen found the barriers, which promoted Todtenhaupt to fourth and Cram to fifth. On lap four, Remick made his move to get around Scharf, and a lap later reclaimed the lead from Dolian. Todtenhaupt began to lose the draft, which left the podium fight to be settled between the three leaders. As the front three stayed in line, Colten Dudici moved through the field, coming up from last position on the grid to ninth on lap ten. As the white flag flew, Dolian and Scharf needed to attack to have any chance at claiming ‘the Rock’. Dolian made his move going into turn two, but Remick was able to hold the outside line going into three. Remick maintained the advantage, claiming the Ignite Shootout victory by a mere 0.093 seconds over Dolian. Scharf settled for third and Todtenhaupt finished in a lonely fourth. Dudici passed a kart a lap for the last five laps, claiming an impressive fifth after starting shotgun on the field.

Margay Racing and the Rock Island Grand Prix would like to extend our appreciation and gratitude to the Ignite Shootout competitors for their participation in the program. The Ignite program puts the focus on driving ability and affordable racing. The Shootout featured three different drivers at the front for the four on track sessions, proving that the program creates a level playing field for racers to develop their skills. For more information on the Margay Ignite K3 package, please visit margay.com or call directly at 1-800-562-7429