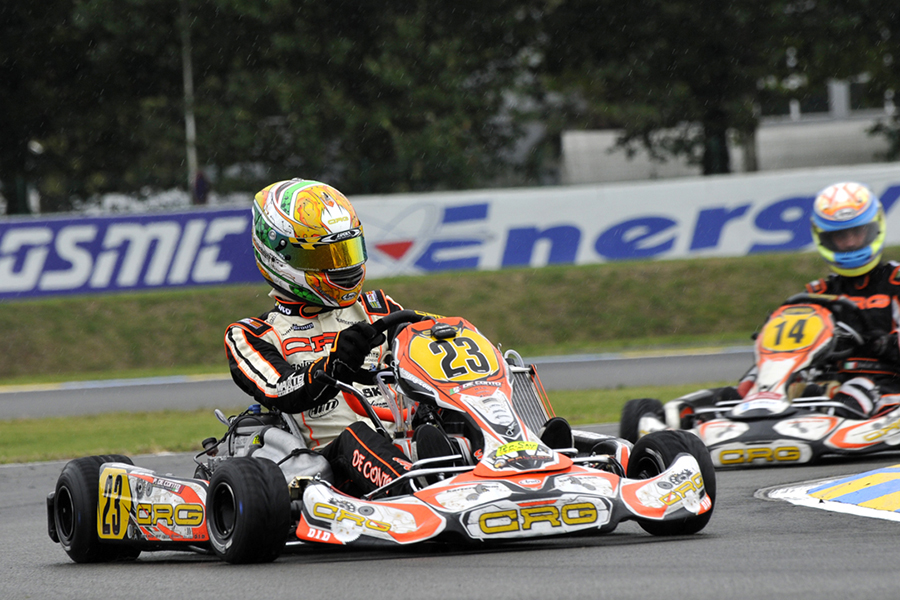 The event of Le Mans is the ideal breeding ground for today’s kart drivers who will become tomorrow’s car racing champions. The KZ World Champion title will be awarded tomorrow afternoon and, always tomorrow afternoon, we will know the names of the winners of the CIK-FIA International Super Cup KZ2 and of the  Karting Academy Trophy. The 175 participants, coming from 43 different countries and from 5 continents, finished today’s Heats which established the starting grids of the decisive races on schedule tomorrow.  There was a particularly interested spectator on the stands: it was Daniel Ricciardo. The Red Bull driver came to Le Mans to assist to the World Championship. The highly coveted title, which is regarded as one of the main objectives of the whole season,  will oblige the drivers taking part in tomorrow’s Prefinals to be particularly careful in their race conduct. The KZ2 drivers will be split into two Prefinals. The results of the Prefinals will establish the grids of the afternoon Finals in all the competitions. All the fans of kart racing will be able to follow the event on the web channels cikfia.tv and cikfiachampionship.com. Motors TV will air a delayed broadcast tomorrow at 05.55pm (on the Europe and France channels) and at 04:55 (on the UK channel). Reruns scheduled in the two following weeks.

Paolo De Conto (CRG-Maxter-Bridgestone) is the pole-sitter of the final phase of the KZ World Championship. Thanks to his win in the last out of three Heats, the Italian driver hauled himself to the leading position. The previous Heats were won by the Dutch Jorrit Pex (CRG-TM-Bridgestone) and by the reigning champion Marco Ardigò (Tony Kart-Vortex-Bridgestone). Ardigò, in another Heat, was hit by a penalty which made him drop back in the standings. Pex, too, struggled in the first Heat, finishing far from the top positions. So, the second slot on the Prefinal grid will be filled by the Swedish Douglas Lundberg (Kosmic-Vortex), while the second row will be occupied by Flavio Camponeschi (Tony Kart-Vortex) and Pex.

Pedro Hiltbrand (CRG-Maxter-LeCont) put in a nearly perfect race: he won four Heats and grabbed the Pole Position in the Prefinal 1. Next to him another Spanish: Jorge Carlos Pescador (Praga-Parrilla-LeCont), who won once. In the Prefinal 2, the first row is entirely French with Thomas Laurent (Tony Kart-Vortex-LeCont) and  Pierre Loubere (Sodi-TM), winners three times and once respectively. The others winners of today’s races are the Arabian Sean Babington (Energy-Parilla), the Dutch Martijin Van Leeewen (CRG-TM), the Croatian Kristijan Habulin (TBKart-Modena), the French Charles Fiault (Sodi-Parilla) and Nicolas Gonzales (Sodi-TM).

Slutskiy in Pole Position in the Academy

Thanks to his two victories in the Heats, the Russian Artem Slutskiy secured the Pole Position in the Prefinal of the CIK-FIA Karting Academy Trophy. Next to him the Spanish Xavier Lloveras Brunet, second in the current Trophy standings. The Spanish Marta Garcia Lopez, current leader of the Trophy, despite one victories in the heats will start from the second row, behind the Brirtish Alfie Brown (all on  Parolin-FIM-Bridgestone).