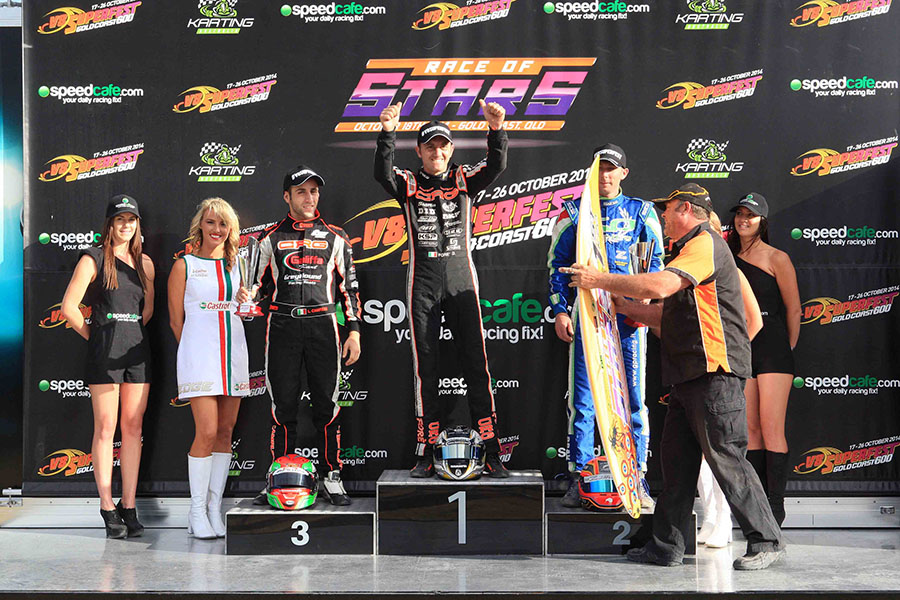 Davide Forè celebrating on the podium at the 2014 Race of Stars (Pic: Coopers Photography)

Reigning Race of Stars Champion Davide Forè, is a confirmed starter for the 2015 Race of Stars at the Xtreme Karting Facility on the Gold Coast next month (October 16/17).

Interview with Davide Forè about returning the Race of Stars on the Gold Coast is available by clicking here.

The five-time World Karting Champion led home New Zealander Daniel Bray and two-time Italian Champion Lorenzo Camplese in the 2014 Race of Stars and he’s aiming to take another Winner’s surfboard back home to Italy next month.

“The trophy from last year’s Race of Stars is one of the favourites in my career.  It takes pride of place in my home,” said Forè, who will line up with the CRG Australia team in the KZ2 class.

“Last year was a very nice experience and a great weekend, it was fantastic to race in Australia again.  I was very happy to hear that the race was on again this year and I can come to this amazing country.  The event had a really nice feel about it and everyone had a great time, I’m very excited to know that I’ll be there next month.”

Ahead of last year’s Race of Stars Forè spent a day experiencing the sights of the Gold Coast where he and his international counterparts experienced the SkyPoint Climb.  At 270 metres above sea level on top of the region’s most iconic residential tower, Q1, the SkyPoint Climb provided the international racers with breathtaking 360 degree views of the Gold Coast region.

“It was the first time I’d climbed to that high and to see a city from above.  The Gold Coast is a very pretty city,” said Forè.

“I missed meeting a Koala last year as I arrived a day later than some of the other drivers, hopefully I can get to do that this year.  I’d like to maybe try a bit of surfing as I never get to try that here in Italy.”

Forè is this weekend competing in the 2015 World KZ Championship at the Le Mans circuit in France where he is aiming to claim his sixth World Championship crown.

As a part of SuperFest, the Race of Stars event will see 200 of the top kart racers from Australia, New Zealand, Italy, Netherlands, America and Mexico invited to compete at the prestigious event.

SuperFest – an initiative of the Queensland Government, City of Gold Coast and V8 Supercars Australia – is a community events program that provides support to organisations and groups wishing to host events and projects that contribute to the festival surrounding the Castrol Gold Coast 600.

About the Race of Stars

The Gold Coast in Australia is one of the most picturesque places in the world and now it has a race that has been designed to attract the best kart drivers from all across the globe.

The Race of Stars event will see more than 200 of the top kart racers from Australia, New Zealand, Italy, America and Mexico invited to compete at the prestigious event.

While the racing is spectacular, just as sensational is the time that can be spent by the visitors in the surrounds on the Gold Coast.

The Gold Coast offers some of the best beaches and theme parks in the world – it’s famous for fun!