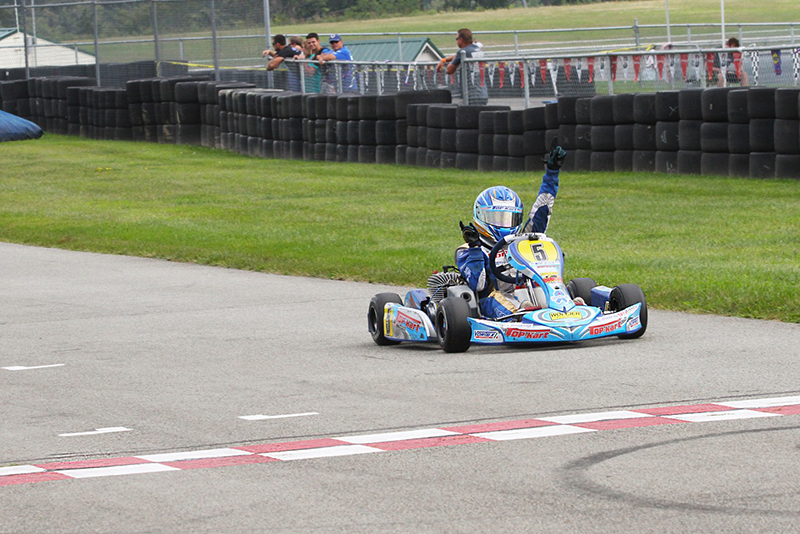 True to form, Top Kart USA was once again the class of the field at the final round of the World Karting Association’s (WKA) Manufacturers Cup series, the Top Kart USA Grand Nationals, held August 28-30 in Pittsburgh, Pennsylvania. The team brought home ten podium finishes, eight pole positions and six wins and eight championship title awards on the way to their fourth consecutive Manufacturers Cup title.

“It is an honor to sponsor one of the greatest kart racing series in North America at its largest event of the year, the Grand Nationals,” said Bill McLaughlin Sr., owner of Top Kart USA. “Top Kart USA is grateful to be part of such a series, and even more grateful to have the opportunity to take home the prestigious WKA Manufacturers Cup Trophy home four years running.”

“We came into this year as a development and learning year for JP Junior. We joined a new team, ran new classes and moved up  to junior category, and with tougher competition we knew that we would have our work cut out for us,” said JP Southern Sr., father of JP Junior. “Working with Top Kart USA helped guide us to a championship in Yamaha Junior. We can’t thank Woltjer Engines, Grand Products, and Top Kart USA enough for all of their efforts!”

In Pro X30 Senior, Garrett Johnston won the race from pole. Teammate Alexander Kardashian crossed the line second, winning the championship along with a spot on the podium. Abby McLaughlin completed the Top Kart USA 1-2-3 with a third place finish.

“This was my first year in senior, and it turned out to be nothing less than amazing,” Kardashian said. “Having won both X30 Senior and TaG Senior Pro, I bring home two championships this year. Top Kart USA is always a great support system for my father and I, providing anything and everything we could need at track and away. We started our own Top Kart dealership in Minnesota, AMK Race Products, and we have been able to get more and more testing at our local track, Stockholm Karting Center.”

In Yamaha Senior Pipe, Dakota Pesek won the championship in dominant fashion, winning the last race of the season from pole.

“This year has been a great year on the Top Kart chassis. With such a great support team behind me, along with Woltjer Racing  engines and my entire family at most all of the races, it has pushed me to work harder and drive my best,” Welage said. “Top Kart USA has given me the opportunity to prove my driving skills and this year has been the best year of my karting career. I’ve now won four championships, and I’m officially leading the points in SKUSA Pro Tour going into the final race at Las Vegas!”

“One of the best things about racing is getting to spend time with your children at the track and watching them grow. Watching Benjamin grow as a young successful driver since we have started karting has been a great joy in my life,” said Jim Maier, Benjamin’s father. “The greatest moment thus far is earning the WKA Kid Kart Championship in 2015. Hard work for our team has paid off, and we thank CRP Racing, Brian Erickson and Top Kart USA for always being there to help us when we really needed it at the track. We look forward to continuing our fast pace next year, when we move up sportsman with Top Kart.”

It was a weekend to forget for Top Kart USA drivers in the Pro IAME Senior class. Neither JP Southern Jr. nor Jeremy Conklin  finished the race.

“It was yet another extremely successful season for our team, and we really can’t thank our customers and their families enough for their dedicated support and hard work throughout the year,” said Blake Deister, co-owner of Top Kart USA. “Everyone involved in our Top Kart family played a very important role in the success of the season. We never expected to end the season with multiple championships, countless victories, and a Manufacturers Cup title. It is a great feeling to know that our support helps achieve these great results. Nothing is better than seeing the huge smiles on these young racers’ faces after knowing they locked up the championship or race win!”