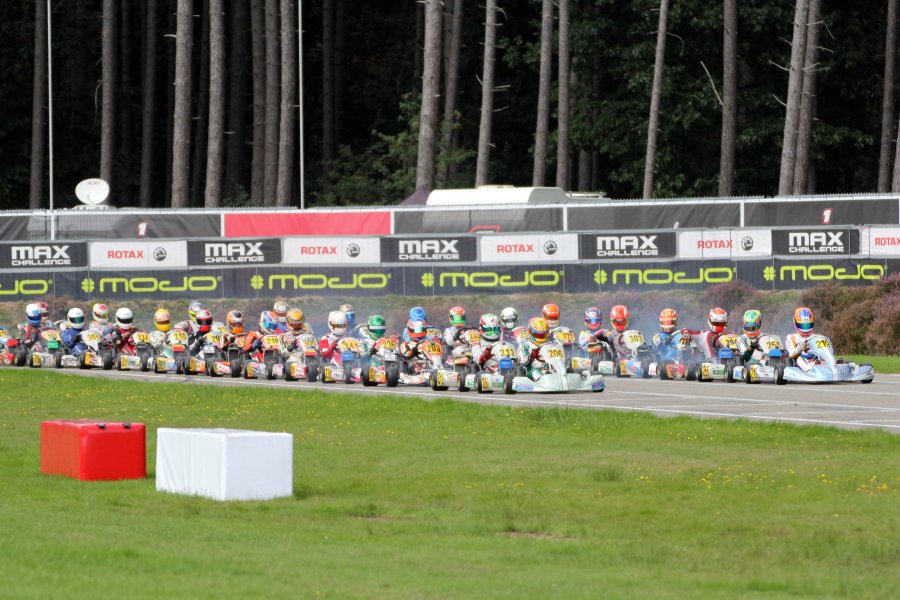 Today the ROTAX MAX Euro Challenge held its final and all-deciding round in Belgium. On the 1.350 metres long circuit of Genk the fight for the championships climaxed until the very last race. Contrary to the days before, the weather kept dry until the end making for perfect conditions on the tarmac and races fraught with nerve-racking action. In the end Jack McCarthy (junior), Pierce Lehane (senior), Ferenc Kancsar (DD2) and Igor Mukhin (DD2 Masters) took the Euro crowns of their categories. Besides the coveted titles nine tickets to the ROTAX Grand Finals were awarded among the top three drivers of the main classes, whereby the best Masters won a free season in the ROTAX MAX Euro Challenge 2016. 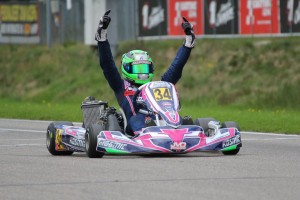 The junior’s prefinal began with a massive start collision, which really shuffled the positions and involved not less than five title aspirants, namely Axel Charpentier (Strawberry Racing), Zak Fulk (Coles Racing), Dean MacDonald (Aim Motorsport), Kiern Jewiss (Strawberry Racing) and Alex Quinn (CRG SPA). After the race they were excluded for cutting the track after the incident, losing every chance to take the championship. On the top pole sitter Fin Kenneally (Aim Motorsport) kept unimpressed by the jumble and was able to defend the lead ahead of Belgium’s Eric Stahl (Daems Racing). But from behind title favourite Jack McCarthy (Strawberry Racing) boosted himself from 17th to third place in an early stage of the race. From then on the Brit did not hesitate long. He overtook the leading duo and pulled away persistently. In the end he took the win and the championship crown ahead of Kenneally and Stahl, while Scott Symons (KR Sport) and Taymour Kermanshahchi (Team TKP) complemented the top five positions.

In the final race Fin Kenneally took the lead at once, pulling away from his chasers. His win was never in danger and so he crossed the finish line first by a remarkable gap. Behind him it was Jordan Brown-Nutley (CRM) showing the best pace towards the end of the race. As a result he managed to overtake Jack McCarthy, who completed the podium positions. Behind the top three up to seven drivers kept fighting for the order – here and there not without body contact. The fourth placed Eric Stahl was excluded from the race afterwards due to unfair driving, which made Mark Kimber (Dan Holland Racing) and Johnathan Hoggard (KR Sport) climb up the ranking. 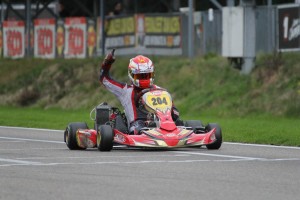 Luc Willemse (Team TKP) was the one who managed the best start to the senior’s prefinal. But the Dutchman could not defend the top being pushed back to eighth place in the end. So it was championship leader Pierce Lehane (Strawberry Racing) setting the pace. He gained the lead soon and headed away from the rest of the grid. By a winning margin of more than two seconds the Australian did not only take the race victory but even decided the championship in his favour. Behind the new titleholder Rinus van Kalmthout (Daems Racing) finished second ahead of Belgium’s Glenn van Parijs (Bouvin Power), John Stewart (Strawberry Racing) and Edward Brand (CRG SPA).

Without any championship pressure Pierce Lehane was supposed be in the favourite role for the final win. But after leading the first metres the new champion dropped back dramatically and had to retire with technical problems. So it was Rinus van Kalmthout taking the lead. Yet the Dutchman was not quick enough this time in order to defend the top. After a few laps Sweden’s Victor Oberg (PDB Racing Team), who had picked up the race from sixth place, set the pace. Once in the lead he pulled away metre by metre and celebrated a dominant victory. Behind him the decision was more open since four drivers kept struggling for the podium. Finally Edward Brand (CRG SPA) saw the chequered flag in second spot closely ahead of Oliver Askew (BirelART/KMS), Rinus van Kalmthout and Denis Mavlanov (KR Sport 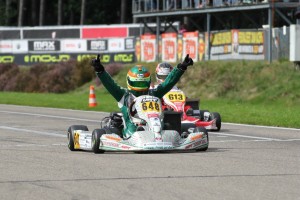 The DD2 prefinal started with an unlucky accident in the back of the grid. A kart flipped over and the driver had to be recovered. Afterwards the race was re-started and saw a brilliant performance of Ferenc Kancsar (BirelART/ KMS). The Hungarian drove in his own sphere taking and easy win – especially since his championship rival Paolo DeConto (CRG SPA) had to retire from the race after a collision had damaged his tyre rim. That was the chance of Switzerland’s Kevin Ludi (Spirit Racing) who did a great final spurt and secured the second place in front of the finish duo Rasmus Markkanen (VRT) and Roope Markkanen (VRT), while Germany’s Marcel Schirmer (RS Competition) completed the top five positions.

Roope Markkanen stood out of the pack in the final: After a wild start phase, in which Kevin Ludi was pushed off track, Markkanen took the lead quickly. Together with Ferenc Kancsar the Finn pulled away from the chasers. Consequently both arranged the win among themselves. Although Kancsar did some successful attempts, Markkanen was able to counter strike and finally took his first win in the Euro Challenge. But Kancsar, too, had reason to sheer. The man from Hungary won the championship, since Paolo DeConto’s fifth place behind Barrie Pullinger (Dan Holland Racing) and Aaron Sherlock (Paul Carr Racing) was not enough to turn the tide. 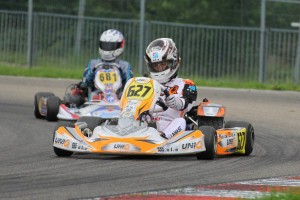 As for the DD2 Masters the races outcome were quite diversified. While in the prefinal Christophe Adams (BirelART/KMS) won the classification, it was Kawase Tomokazu (Uniq Racing Team) who struck back in the final. In the championship Russia’s Igor Mukhin (CRG SPA) took the crown.

Although one of the most exciting seasons of the ROTAX MAX Euro Challenge is over now, there is one more major event promoted by RGMMC: The ROTAX MAX International Open will be held from 19th to 25th of October 2015 on the brand new karting circuit of the Adria Raceway. This special event in Italy offers the last tickets to the ROTAX MAX Grand Finals at Portimao (POR) in November – even providing a last chance place for the DD2 Masters category. So stay tuned on the official website www.rotaxmaxeurochallenge.com or www.rgmmcmedia.com, where you get all information regarding reports, photos, results and live TV stream.