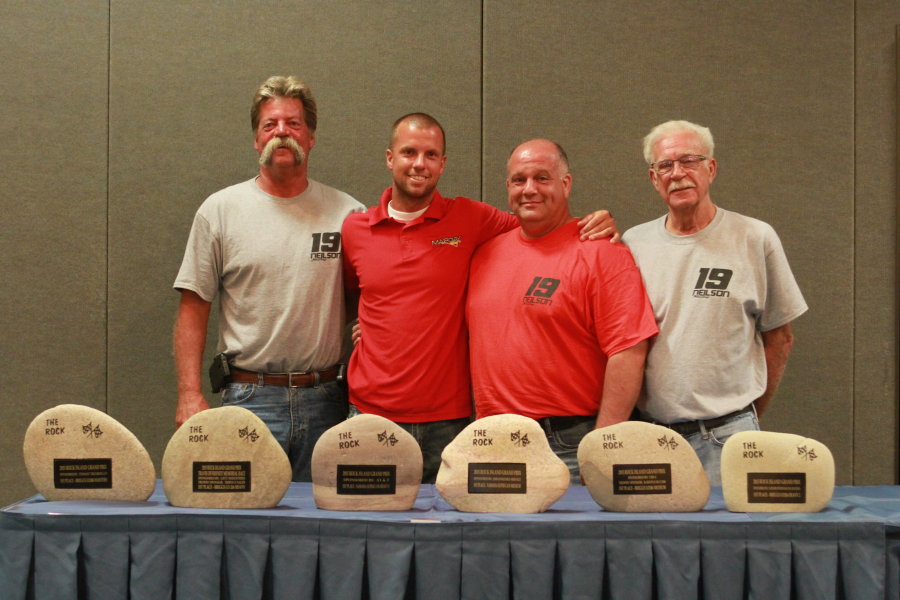 Another hot day in the Quad Cities area for the big show to close out the 21st annual Rock Island Grand Prix. Fourteen main events were held over the afternoon hours around the 6/10-mile street course, with the many RIGP volunteers and spectators lining the fences braving the elements to enjoy a great day of racing. The event is one of fun on and off the track, but today was about earning the prestigious ‘Rock’ trophy for a victory. Spectators and competitors were able to witness history as Tony Neilson began the day began with a win, and ending the day with a total of six to claim the record for total wins in one event, and move himself into second overall behind Gary Lawson. 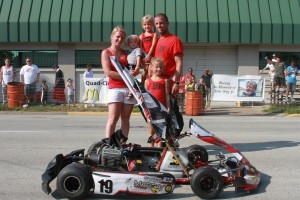 Neilson celebrates the sixth victory with his family (Photo: EKN)

The first win came in the opening race of the day, Briggs LO206 Heavy. Starting on the pole position, Neilson fell back to third after the opening lap. Climbing back to the lead after three laps, Neilson led the remainder of the 15-lap event to score his first of the day, seventh to tie him with RIGP legend Scott Evans, his lead wrench. Dylan North and Matt Pewe kept it close, both coming up short with Scott Kleman and defending race winner Connor Lund making up the top-five. Neilson defended his title in the Briggs LO206 Medium category. Neilson and Kleman broke away from the field to set the pace. They ran 1-2 until a red flag on lap nine. With the race halfway over, Neilson was declared the winner with Kleman second. Bermuda driver Scott Barnes was third ahead of Matt Pewe and Lund.

Neilson jumped from one kart to another, starting on the pole position for Yamaha SuperCan Medium. He led the final 18 laps of the race with Killian Keaveny right on his bumper. The two decided the win on the final lap, with Keaveny taking the lead after receiving the white flag. Neilson got back around in turn five, and reached the checkered flag first. Keaveny made contact with the barriers but was able to continue to finish sixth. Tony Jump came from 21st on the grid to place second, ahead of Devon Smith, who was removed in tech. That moved Michael Dittmer to third, Dustin Bloome to fourth and Austin Osborne fifth. 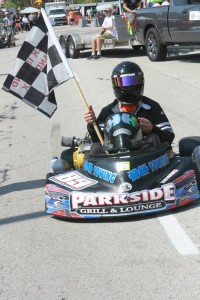 Neilson defended his crown in the Briggs LO206 Masters division, pulling out to a 13-second advantage in 15 laps for his fourth win of the day. Ken Williams drove to second, but was removed following tech to put Robby Warner, Bryan Bernloehr, Jason Birdsell and Greg Jasperson into the top-five. The final two wins came in the new Briggs LO206 Heavy 2 and the Yamaha SuperCan Heavy 2. Neilson was shuffled back to fourth in the opening lap of the Briggs race, working his way into the lead by lap five. Neilson held off challenges from Connor Lund and Matt Pewe. Logan Smith and Derek Hastings capped off the top-five. With history on the line, Neilson took on the final race of the day back in the Margay / Kevin Williams Engines entry. Texas driver Austin Osborne was set at stopping that, trying to earn his first Rock trophy. Neilson led the first 10 laps before Osborne took over the point. He led the next seven laps until Neilson returned back to the lead. Osborne tried everything he had, but came up short with Neilson earning the victory. In total, Neilson took home $2,700 in cash prizes from the weekend. Weston Moon drove to third with Carter Pease and Mike Welsh completing the top-five.

Another emotional victory came at the hands Matt Pewe. His statement of ‘coming back to win that f&$%ing Rock’ at the awards banquet last year stuck with everyone there, and showed the emotion and prestige of winning at the RIGP. Jesse Clossey led the opening 13 laps of Clone Heavy until Pewe took over the lead. He held on for the final corners, edging out Clossey by just 86 thousandths of a second at the line. Michael Dittmer drove third, with Ty Schurr fourth and Mark Petersen fifth. 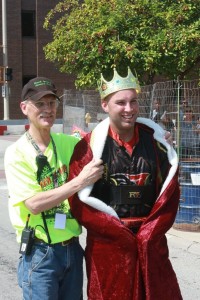 Josh Lane had two previous wins at the Rock Island GP, but never a King of the Streets title. It had always been a goal since Lane became a shifterkart driver, watching the many others earn the crown ahead of him. Lane started on the pole position and led the way with Colton Aldridge right on his bumper. Aldridge waited until two laps remaining with Lane making a slight error. Aldridge led as they took the white flag, but ran a defensive line down the front straight. As they went through turn one, he slid wide on the exit and made contact with the barriers. This allowed Lane to cruise to the victory and his first KOS crown. Alex Conlin moved up to second with Scott Barnes third. Josh’s father Lance Lane finished fourth with Cody Elliott fifth.

Margay Ignite Shootout was a new class for the event, with all the 16 drivers piloting a spec chassis with the Briggs LO206 engine and spec Bridgestone tires. For many, it was the first time at the Rock Island Grand Prix, and others, a chance to get back behind the wheel on the city streets. Missouri driver Jeremy Remick won a three-driver battle for the win. Remick led the final 10 laps to score his first RIGP victory. Jeffrey Dolian was second with Keith Scharf third. Nick Todtenhaupt drove to fourth with Colten Dudici coming from last to fifth.

The only race Neilson was shut out in the day came in Yamaha SuperCan Medium. Tony Jump led the first 19 laps. Defending race winner Tim Goettsch stayed glued to his bumper and showed great patience. Goettsch passed for the lead on the final circuit, and Jump was unable to respond. Goettsch reached the checkered flag first, earning his fifth victory in class, eighth overall to put him tied for third on that prestigious list. Jump settled for second over Morgan Schuler, Carter Pease and Weston Moon. 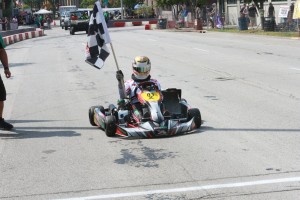 The Italian Motors operation made the long trek from the pacific northwest, including Mazda Road to Indy driver Scott Hargrove. The Italkart/X125 driver led all 20 laps to secure his first RIGP victory in his first visit. Hargrove drove to a six-second advantage over Austin Osborne. Josh Lane finished third ahead of Lane Vacala and Gary Roehl. TaG Masters and 125 Masters were decided off the track. SKUSA Fikse Wheels Pro Tour defending champion Ethan Wilson drove to the victory on-track. An engine issue in tech removed him from the results, placing Anthony Honeywell on top of the podium and his first Rock trophy. Ryan Starzyk and Brian Wake completed the top-three. Scott Barnes led the majority of the 125 Masters main event, crossing the line first. Barnes came across the scales one pound underweight, taking the win away and giving it to Boston driver Jason Alden, making his first start at the RIGP. Race director Terry Riggins performed his best ever at the event, finishing second at 65-years-old. Lance Lane was involved in a final lap incident, but was classified third with a lot of attrition in the category.