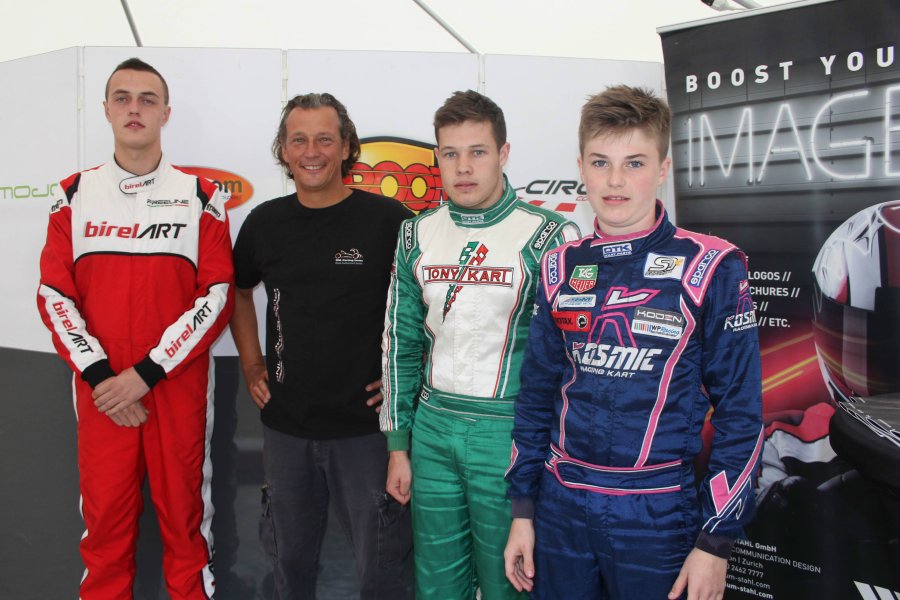 At Genk the ROTAX MAX Euro Challenge today experienced the first racing action on its way to the all-deciding finals on Sunday. As if the highly balanced competition was not thrilling enough, the weather made for another unknown factor. Conditions were really unpredictable and kept changing between a dry and a wet circuit. Consequently the new circumstances even effected the ranking, which came up with some drastic changes on the top …

In the junior class Friday’s fastest youngster, Fin Kenneally (Aim Motorsport), showed no weakness. Regardless the track was like, the British talent was in control and defended the pole-position by a clean record of three wins. Behind him local hero Eric Stahl (Daems Racing) took two wins and secured the second place in the ranking ahead of Dean MacDonald (Aim Motorsport), who was the best of the title contenders. Johnathan Hoggard (KR Sport) from the UK and Kenzo Aerts (Daems Racing) from Belgium completed the top five positions. Championship leader Jack McCarthy (Strawberry Racing) had to be satisfied with 17th place in the end, even bringing up the rear of the championship candidates since Zak Fulk (Coles Racing), Kiern Jewiss (Strawberry Racing), Axel Charpentier (Strawberry Racing) and Alex Quinn (CRG SPA) stayed within the top twelve positions.

After being the quickest senior on Friday, Russia’s Denis Mavlanov (KR Sport) suffered a setback. In his first heat he was not allowed to start due to non-conformity of his kart. Although he repaired his losses in his other heats by finishing third and second, he fell back to twelfth place in the ranking. Meanwhile championship leader Pierce Lehane (Strawberry Racing) kept cool. The Australian took two wins and a third place, which granted him the pole-position. Second place went to Dutchman Luc Willemse (Team TKP) who belonged to the circle of heat winners, which applied to Rinus van Kalmthout (Daems Racing) and Martin Mortensen (RS Competition) who took positions three and four in the ranking. John Stewart (Strawberry Racing) complemented the top five ranking before the prefinal on Sunday.

The DD2 category witnessed some very balanced heats. In the end one celebrated five different heat winners. Yet Ferenc Kancsar (BirelART/ KMS) did the most constant job in the heats. Although the championship leader won only one heat, he gained two more second places which made him defend the lead of the field. Right behind him Paolo DeConto (CRG SPA) boosted himself onto second place not only improving his moderate qualifying result, but making for a neck and neck fight for the champion’s crown. Finland’s Roope Markkanen (VRT) was the only one being able to win two heats and was rewarded by the third place in the ranking. Fourth place went to Austria’s Constantin Schoell (BirelART/ KMS) ahead of Switzerland’s Kevin Ludi (Spirit Racing).

When it comes to the DD2 Masters Japan’s Kawase Tomokazu (Uniq Racing Team), who had set the benchmark on Friday, could not tie in with that pace. He had to leave the way to Christophe Adams (BirelART/KMS), who showed an outstanding performance by sensationally winning the last heat. Consequently he took seventh place in the overall ranking which of course was the best Masters result. Second place went to UK lady Tamsin Germain (DG Racing) in 14th position, while Kawase Tomokazu dropped back to 19th spot. Russia’s Igor Mukhin (CRG SPA) did not take part in the heat races. The championship leader had go back home due to personal affairs but promised to be back for the final day, in order to go for the title.

On Sunday morning the second chance heats will complete the grids for the big finals, which are due to start at 11:40 a.m. The fight for the championship crowns as well as nine tickets to the ROTAX MAX Grand finals enters the decisive phase. Everybody is invited to join the race action, as live TV coverage will start on Friday and continue throughout the weekend. So stay tuned on the official website www.rotaxmaxeurochallenge.com or www.rgmmcmedia.com, where you get all information regarding reports, photos, results and live TV stream.