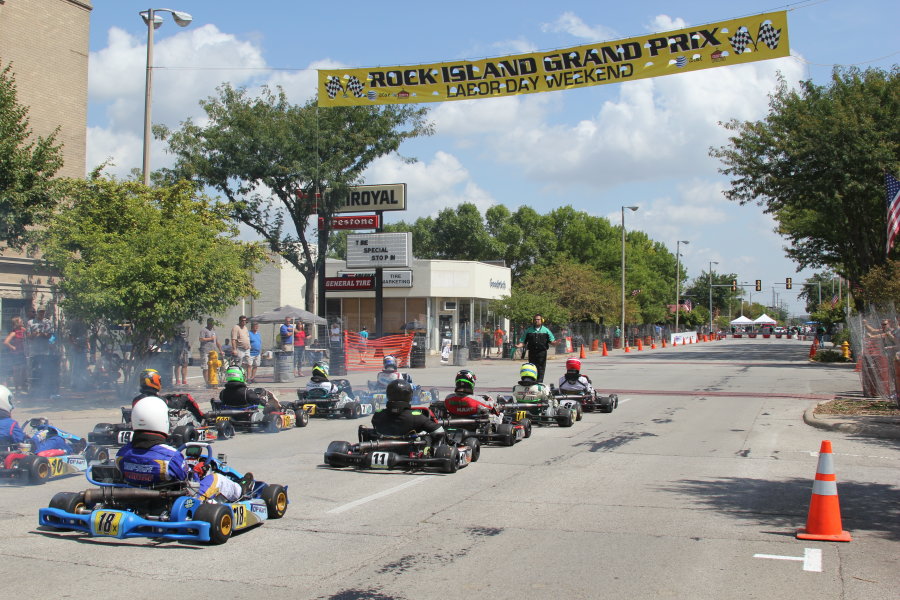 Labor Day weekend is a busy time across the United States. Families gather for one final time at their favorite vacation spot, kids and parents prepare for the school year, and the thought of cold weather coming soon begins to creep in. For racers, it is a chance to take part in one of the most unique and fun-filled karting events of the year – the Rock Island Grand Prix. The Labor Day weekend hosts a three-day long festival in the Quad Cities area, with the two-day street race hosted by a long list of volunteers a big highlight in the celebration of the holiday. Racers from all over North America travel to the Illinois city nestled along the banks of the Mississippi River are set to take part in the 15 categories offered in the 21st annual event.

eKartingNews.com will once again provide the Trackside Live program, allowing those who are unable to attend to catch the action live. Play-by-play of EKN’s Rob Howden will be streamed on the eKartingNews.com/live, which includes live timing courtesy of Race Monitor. Daily reports, paddock insider notes, and forum updates on the Official Discussion Thread will be published throughout the weekend. Watch for updates to be published on Facebook, Twitter, Instagram and head to the EKN Event Page for complete coverage.

This year’s race will be like no other, as the race format is changing for the first time in its 21-year history. Competitors in all classes are going back to the old-school style of pea-picking to determine the starting spot in the new 10-lap Heat race scheduled for Saturday, replacing the qualifying session. Six classes (206 Heavy, Yamaha Heavy 1, 206 Medium, Yamaha Medium, 206 Masters, and 206 Heavy 2) will be split up by their pea-pick into two separate heat races, odd pea-pick numbers in one heat and even pea-pick numbers in the other heat for those six categories. Changing up the format more, finishing position in the heat race and new passing points will be awarded in each heat race, and combined to determine the grid positions for the Sunday main event. Passing points are determined by the difference between starting and finishing position.

The #OperationGrassroots movement continues across the country, and the Rock Island GP has helped to generate excitement by offering the Briggs and Stratton LO206 for a fourth straight year. After beginning with one category in 2012, there are now five 206 classes taking part in the street race. All four are over the 20 entry mark with the Heavy and Medium categories nearly reaching the 30-driver point. Last year’s race winners Connor Lund and Tony Neilson are back to defend their crowns, with both entered in the new 206 Heavy 2 category which gives Briggs racers another chance to race around the streets of Rock Island. 206 Masters is the fourth category, introduced in last year’s event. Neilson, just old enough to qualify for the 30-years and older class, was able to score the win and is back to defend his title against a growing field.

The newest class is the all new Ignite Shootout. Drivers will compete in a spec Margay Ignite K3 chassis powered by the Briggs LO206 engine with Bridgestone tires, supporting Arrive-and-Drive racers. The class feature no former RIGP winners, so one lucky driver will become a first time RIGP victor. The class will also be a highlight of the MavTV film crew on hand, filming footage for a broadcast on the Motorsports Road Trip TV series, featuring Aaron Carotta.

Each year, the Yamaha categories feature large lead packs and dramatic last lap finishes. 2015 should be no different with another large field entered in the Yamaha SuperCan Medium and Yamaha SuperCan Heavy divisions. Three-time class winner Tim Goettsch will go for a fourth in the Medium class, with two-time winner Tony Jump going for a third Rock trophy. A Yamaha SuperCan Heavy 2 class was added to give Yamaha racers a third chance to race on the weekend, with many of the same names gunning for another victory.

The King of the Streets has moved from the spec Stock Honda powerplant to an Open format, reverting back to what it was prior to 2009. Drivers can chose any six-speed engine to compete, and the winner will become a first time KOS victor with no former winners in this year’s field. The Lane family, featuring father/son tandem of Lance and Josh, each have a Rock trophies of their own, and will battle in the King of the Streets. Each ends of the continent are covered with New Hampshire driver Tyler Guilbeault joining his DRT Racing teammates, while British Columbia’s Don McGregor is making the trek down from the west coast in his Italian Motors entry. Shifter action is rounded out with the Masters category, where Lance Lane has won the last three editions.

TaG Senior is welcoming a number of new competitors with Pacific Northwest-based Italian Motors squad bringing down racers to compete in the streets. Mazda Road to Indy driver Scott Hargrove is going back to his roots, leading the Italkart squad along with veteran Don McGregor and Jamie McAllister. Texas driver Austin Osborne is another driver to watch with no returning winners in the field. TaG Master will have some national names competing for their first Rock trophy. Defending SKUSA Pro Tour champion Ethan Wilson and SKUSA #3 plate Anthony Honeywell are among the challengers.

Clone Heavy caps off the 4-Cycle categories offered at this year’s Rock Island Grand Prix. Defending champion Michael Dittmer will defend his crown as Connor Lund is among the top challengers. Vintage karts were exhibition for the last few years, and now for 2015 will race the full program and for a Rock trophy.