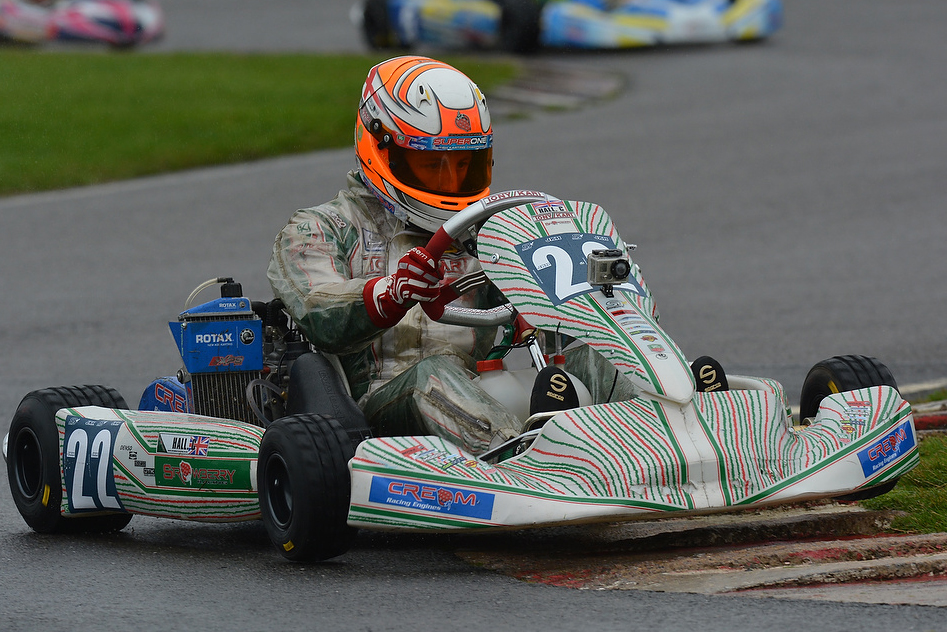 As the series starts its wind-down it was the third last round for most classes, and the penultimate round for the Rotax classes at the twisty Midlands circuit.  Kiern Jewiss roared back from a poor qualifying to provisionally take the MiniMax ABkC National title with two dominant wins aided by his main rival Axel Charpentier spinning out in the first final.  He said: “The whole field this year was pretty much ex Cadet drivers, so we were all the same learning the class.  Although Glan y Gors did not go to plan, this round has gone well thanks to plenty wet testing.”  The first finals in the morning were fairly dry with a little drizzle, but heavy rain fell for the second finals in the afternoon, but both sets full of exciting racing. 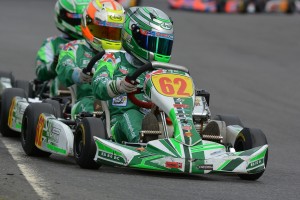 Caden McQueen topped the timed qualifying from Nicholas Reeve and Ben Kasperczak but his luck wouldn’t hold through the finals.  Nicholas Reeve and Oliver Clarke were the heat winners with Archie Brown taking an exclusion for contravention of a flag signal.  That put Reeve and Clarke on the front row of the first final, McQueen and Guy Cunnington right behind.  From the standing start Reeve had a poor take off, so Clarke slotted into the lead chased by Cunnington and Dragan Pinsent.  As Reeve towed Harry Thompson onto the lead group, Pinsent made his move for second then Reeve leapfrogged to the front.   A serious fight ensued in what was now an eight kart train, Thompson taking the lead but deposed at the end by Reeve, hung out to dry, so the order was Reeve, Pinsent, Ben Fayers and Alex Lloyd.  Thompson, Wesley Mason and Aston Millar all took 5 place penalties.  For the second final, now wet of course, after two false starts to sort out the correct grid placings, Pinsent leapt into the lead from Reeve, the latter soon deposed by Clarke, Fayers and Lloyd.  Clarke hammered up the hill to relieve Pinsent of the lead then frantically traded that with Lloyd all the way to the flag.  Clarke just managed to get back in front on the last lap, but before then Pinsent stopped on track, so Cunnnington was third, Oliver Bearman fourth. 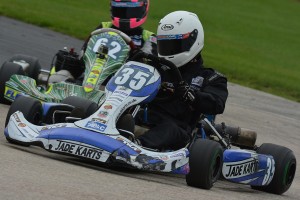 Bradley White was on a roll from start to finish, topping timed qualifying from Abbi Pulling whilst Matthew Graham and Joseph Reeves-Smith languished in 11th and 12th at one of their local tracks.  Reeves-Smith found pace for the first heat win, whilst Chris Whitton took the second with Adam Sparrow having an exclusion for driving standards.  Whitton would claim pole for the first final with Reeves-Smith alongside but championship leader Graham back in 11th place.  Whitton had the hole shot but soon faced a challenge from Reeves-Smith, then White leapfrogged both of them.  He resisted the pressure throwing off a new attack from Jack Davidson.  Reeves-Smith rallied to re-take second and momentarily had a gap both ahead and behind.  Then Davidson found new pace, pulling along Ryan Edwards, hanging Reeves-Smith out to dry with a fall to fifth.  In the last lap melee, which allowed White a big lead, Whitton jumped to second with Kristian Brierley and Edwards following, and Davidson dropping to 12th.  The O Plated Matthew Taylor suffered a five place penalty.  For the second final, White made a great start and as the others squabbled he stretched it to almost 10s.  Reeves-Smith valiantly hung onto second for a while, usurped by Whitton.  However the wet weather was suiting Graham, he was hurtling up the order and eroding the gap to Reeves-Smith.   On the second attempt the switchback out of turn one succeeded, so Graham was now third with useful points.  Reeves-Smith’s defence put him wide at turn 6, he dropped to seventh in favour of Abbi Pulling, Edwards and Adam Sparrow.  Taylor had another 5 place penalty. 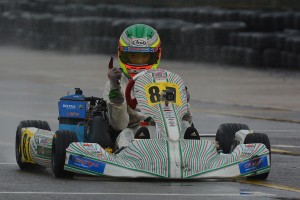 Owen Byatt got off to a good start for pole in the heats, then earning a third place in the first one to Kiern Jewiss’ win was reasonable the second did not go to plan.  That was won by Joe Turney, Jewiss also suffering with tenth and William Pettitt had an exclusion.  So Tom Wood took the first final pole, with Mark Kimber alongside and Jewiss and his main championship rival Axel Charpentier behind.  Kimber headed them all up the hill but soon Wood was in the lead from Charpentier.  That quickly changed to having Turney in front, Wood second but soon losing many places and Charpentier coming off and restarting last in a three kart collision out of the top corner.  Turney pulled clear of Jewiss but Pettitt was on a charge and gained second place, soon challenging Turney.  Trading places lost them both time, swallowed up by the crafty Jewiss with Pettitt having a quick off to fall to seventh.  So as Jewiss flashed over the line 2s clear of Turney, Wood, Tyler Chesterfield and Kimber he would only need a top 18 finish in the second final to take the provisional title.  Wood was then demoted five places as was Charpentier whilst Tommy Foster was excluded, all for driving offences.   A super start and Jewiss was on his way to another win with a near 4s advantage over Chesterton who had reeled in and passed Turney.  Wood had no opportunity to improve, he stopped on the sighting lap.  Pettit made some slight improvement to come in fifth behind Owen Byatt, whilst Jordan Collard lost places with a quick spin but Charpentier only reached 11th.  Jenson Butterfield had come off early in the race with Garrett Webb, then was excluded from the meeting for abusive language. 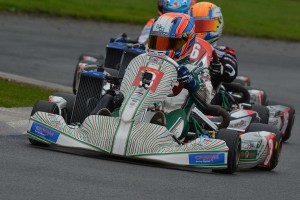 Zak Fulk topped the timed qualifying and two seconds to Tom Gamble set him up well for the finals, but then his luck ran out. The first heat had Jonathan Hoggard and Ethan Ling both excluded, Hoggard appealing without success.  An incident packed first final saw Gamble with the early advantage as Harrison Thomas, Scott Symons, Jack McCarthy and Rory Hudson all fought behind.  Despite this they all caught Gamble, with McCarthy taking over the lead from Symons, Gamble, Jordan Brown and Thomas Turner.  Gamble came back to second, but behind him Brown was pushed off.  Oliver York had shot up 11 places to sneak into second, Gamble running wide and falling to fourth in favour of Turner with Dean MacDonald also slicing through the field for fifth.  Then the penalties began: Thomas excluded, Symons, Skelton, and Harry Gooding all having 5 place penalties and Rory Smith a one lap penalty.  Gamble and McCarthy tussled in the early laps of the second final until Gamble worked clear, leaving the recovering Hoggard to grab second.  Next on the move was Jordan Brown-Nuttley, up from grid 17, to challenge for the lead.  But Gamble was too far ahead.  Meantime York was recovering from a bad start and took third over Turner and McCarthy.  Hoggard had been running sixth but was given the mechanical defect flag and had to pit. 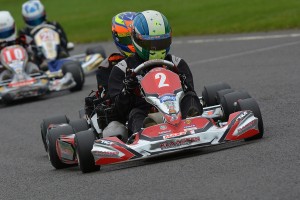 Owain Rosser had the edge in timed qualifying and won the second heat, the first taken by James Ogden so Rosser claimed the first final pole.  There might have only been nine entrants but the racing was tremendous with Rosser soon dropped in favour of Ogden, then Simon Vercoe and then Matt England all having turns in the lead.  Ogden and England broke away then were reeled in by the pack, Al Paterson splitting England and Sproat as Vercoe fell to fourth.  The penalties soon changed the order though with Vercoe excluded for being underweight, and Ogden having a five place penalty along with Andrew Ferguson.  Rosser plunged from first to last on the opening laps of the second final as England picked up the front position chased by the fast starting Ogden.  Vercoe too had wasted no time in getting to the front, as Ogden forged to the front Vercoe picked up second.  England fought back but Sproat was now on song and traded the lead with Ogden.  Rosser entered the fight, leapfrogging both England and Sproat and letting Ogden go clear for the win.  Sproat fell to fourth on the last lap as he battled with Rosser.

Luke Knott was on top of the TQ from Gary Donnelly, then Donnelly won both heats for the first final pole, Sam Marsh alongside with Matthew Hirst and Sam Smelt on the next row.  Marsh enjoyed the first lap in the lead, then taken by Donnelly.  Jac Constable came off at the top corner.  Connor Hall sped up from grid 14 to chase down and pass Marsh for second then slice past Donnelly for the lead.  No one could get near for the rest of the race as Josh Collings was next to try.  However Marsh was now faster, taking second, only to find Jai Nijjar was faster still and able to pass and start to hunt down the leader.  Danny Russell ran home in sixth but had a one lap penalty applied. For the second final Russell pitted on the sighting lap, coming out later and meantime Hall took the lead and was hardly seen again by his rivals.  Nijjar and Collings settled into second and third, Marsh falling a couple of places to fifth behind Turner.