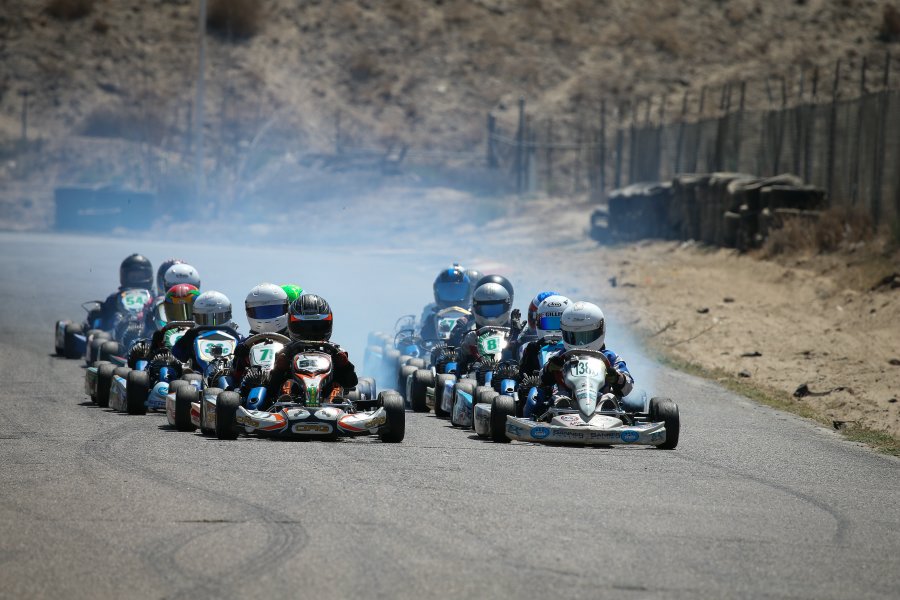 The California ProKart Challenge returned to action this past weekend (August 28-29) at the historic Adams Motorsports Park in Riverside, California. Many drivers in the southern California area established their racing careers at Adams, with quite a few going on to other forms of motorsports. This past weekend, a select few helped to further their championship ambitions in the Superkarts! USA regional program with victories, while others increased their chances of earning a title following the upcoming finale weekend at the Streets of Lancaster Grand Prix at the end of September. Not only were racers taking on a tough circuit, but the weather also amped things up with 100+ degree temperatures both days. Young guns emerged in the headline categories, helping the championship hopes of Christian Brooks and Jarred Campbell come alive. 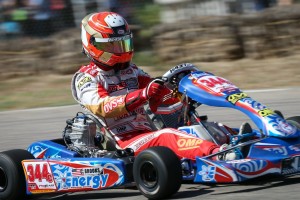 Phil Giebler Racing TaG Senior championship leader Christian Brooks had two victories in his pocket heading into Adams. The Senior rookie extended that lead thanks to a near sweep over the 16-driver field on Saturday. All three championship rivals were at the top of the order in qualifying, as Brooks set fast time with a 44.720-second lap. Veteran Matt Johnson was just 75 thousandths off in second, with Austin Elliott third. Johnson was able to prevail with the provisional win in Heat #1, only to be penalized two positions for blocking on the last lap. That promoted Brooks to the win. Johnson came back to lead the majority of the Heat #2 laps, with Brooks slipping by to reach the checkered flag first. Brooks, however, was penalized two positions for avoidable contact with Johnson, giving the veteran the win and main event pole position. Brooks came from P3 on the grid, working past former SuperNationals winner Wesley Boswell and Johnson on the opening lap to assume the lead. From there, Brooks drove away with fast laps of the race to earn his third victory on the season by a five-second margin. Johnson was able to edge out a hard-charging Elliott for second with Boswell down to fourth, just off the podium. LAKC front-runner Aaron Aguirre drove to fifth in his California PKC season debut. 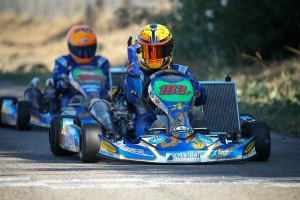 The young counterpart in the Vemme Kart/Extreme Karting S1 Pro Stock Moto category is point leader Jarred Campbell. The S1 rookie jumped back to his winning ways after scoring the victory in the first two rounds, placing second at the last two events, then sweeping the action at Adams. Campbell cleared the field by over a half-second in qualifying, then continued his torrid pace throughout the day. Jarred led all 10 laps of each heat race, going on to pace the field in the 16-lap main event. Two-time defending series champion Billy Musgrave gave a great run and closed up in the feature, finishing a very close second. S1 rookie Kolton Griffin completed the podium, as Ryon Beachner and Matias Podboj rounded out the top-five.

The largest class of the event was the Leading Edge Motorsports TaG Cadet division at 22 drivers strong, welcoming first-time winner Daniel Inzunza. Competing outside the top-10 for much of the season, Inzunza improved during the break to challenge and beat the top championship drivers. Title contender Oliver Calvo set the pace during the first half of the day, beating out Ryan Schartau and Inzunza for fast time. Calvo and Inzunza split the laps led in Heat #1, with Calvo leading the second half of the race for the win. Inzunza led all but one lap of Heat #2 to score the win as Calvo was shuffled back to fifth, as point leader Anthony Willis led a group of drivers toward the front. Willis took the point at the start of the main event and led until lap five. Inzunza took back the point and set the pace for the remaining laps for his first series victory. Schartau climbed up to second with Shea Weston completing the podium. Dominic Gorden was fourth with Calvo fifth as Willis dropped to eighth at the checkered. 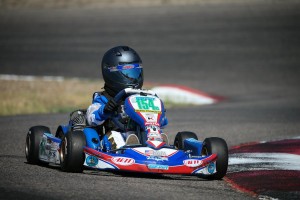 Leading Edge Motorsports TaG Cadet Rookie had 16 of its own drivers in Adams, with Bryce Stevens becoming the fifth different winner on the season. The day was all Stevens, finishing the on-track sessions at the top of the result sheets. Stevens edged out Taylor Gibson by 94 thousandths in qualifying for the fast lap. Gibson responded by leading early in Heat #1 before Stevens reassumed the point and took the win. After leading wire-to-wire in Heat #2, Stevens was dropped down to fifth on the opening lap of the main event. Alexander Diakoumopoulos led the way early before Gibson took over the point on lap four. He led the remaining laps to reach the checkered flag first, only to have the victory taken away in Tech for improper clutch. Stevens had worked his way into second by the white flag, and was handed the top step of the podium. Aiden Kempf and Diakoumopoulos joined him on the steps. Alexander’s brother George finished fourth with Kasey Gills in fifth.

Nicky Hays helped his championship chances with a solid day in the Nash Motorsportz TaG Junior category to earn his second victory of the season. Hays was on top from the opening session, posting the fast time in qualifying and leading all the laps in Heat #1. Hays led all but the final lap of Heat #2, with Dante Yu slipping past for the lead and the win. Yu held the lead from the pole position to begin the main event, leading the first six circuits. Hays assumed the point and from there pulled out to a 3.6-second advantage for the victory. Yu settled for second, with Colby DuBato completing the podium. Round Four winner Jagger Jones finished fourth as point leader Trey Brown ended up fifth. 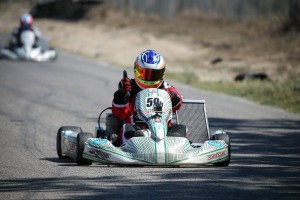 Brian Phillipsen also gained valuable points heading into the season finale later this month, earning his third straight feature victory in the Mike Manning Karting TaG Master class. Diego Pelosi was the driver to beat early on, posting the fast time in qualifying and leading all nine laps in the opening heat, all with Phillipsen running second. Things shuffled up at the front in Heat #2, with former Pro Tour champion Scott Falcone and Tom Ricketts joining the fight. Falcone led all but the final lap, with Phillipsen sliding by for the win on the last circuit. Ricketts finished second ahead of Falcone as Pelosi went off on the final lap, putting him to the back of the field for the start of the main event. Phillipsen led all 16 laps of the Final for his third straight, beating Falcone by just over 1.5 seconds. Ricketts drove to third with Pelosi climbing to fourth over Tom Nields.

The win streak continued for Aaron Schmitt in the Professional Kart Support S3 Novice Stock Moto division. Schmitt added his fourth of the season, third straight after sweeping the action at Adams. He led all day long, never relinquishing the number one position, en route to a five-second victory over Robert Heck Jr. and Andrew Murowatz, who earned his first podium of the season. Callum Smith had his Sanner Racing S5 Junior Stock Moto win streak come to a close at Adams thanks to Anthony Freese securing his first victory of the season. Callum had gone thru all 2015 California PKC and SKUSA Fikse Wheels Pro Tour races without losing a Final. He continued to show the way at Adams in qualifying and Heat #1, but was then penalized two positions in the race for a radiator height infraction, giving Freese the win. Callum came back to win Heat #2, and was leading the first three laps of the Main until getting caught up in a wreck involving S3 drivers, putting him out of the race. That allowed Freese to cruise to the victory over Prescott Campbell, as Smith was classified third. 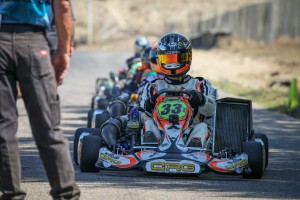 Rob Logan ran second all day, sliding into the lead for the checkered flag in S4 Master (Photo: DromoPhotos.com)

Ryan Perry Motorsport S2 Semi-Pro Stock Moto had point leader Carter Williams return to the top step of the podium after just missing out in Sonoma. Williams swept the action at Adams to earn his fourth victory of the season, beating out Kol Bailey and Marco Eakins. Rob Logan has made things interesting heading into the Streets of Lancaster Grand Prix for the series finale in the SwedeTech Racing Engines S4 Master Stock Moto title chase. Logan scored his first victory of the year at Adams to close up the gap on point leader Darren Elliott. The damage is minimal, with Elliott running much of the day at the front, qualifying first and winning both heat races. Elliott led early in the Final until Logan drafted by for the lead. He held on to score the victory as Elliott settled for second and Vivek Tandon earning his best finish of the year in third. Kalvin Chen became the fourth different driver to win in the new 2Wild Karting S4 Super Master Stock Moto class. The day was a complete sweep for Chen, leading from qualifying to final checkered flag. Point leader Ken Schilling finished second and Darrell Tunnell recorded his third podium of the season.

During the podium ceremony, Superkarts! USA gave away two FREE sets of MG SK Tires ($240 value each) and four FREE entries to the season finale. The sixth and final round of the California ProKart Challenge is set for the Streets of Lancaster Grand Prix on September 26-27, as the championship chases will be decided with the competitors taking the battle to the streets.