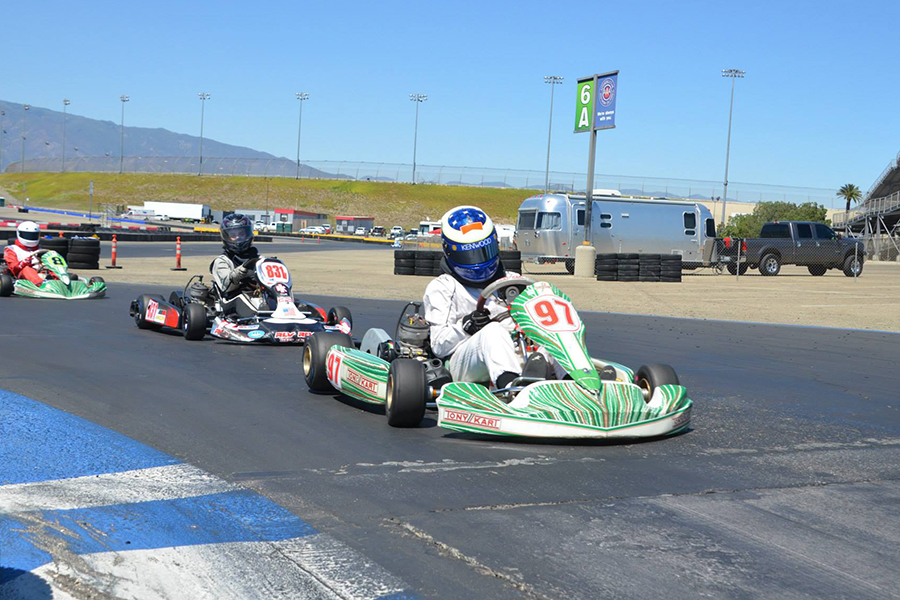 The Los Angeles Karting Championship program contested the sixth round of the 2015 season on August 16 at the CalSpeed Karting Center. The Fontana, California facility offered another exciting weekend for nearly 170 entries competing for big prizes and championship points as the season closes in on the finish line. During the raceday, a video production crew was onsite, filming footage for a new television show to air sometime this fall. The film crew got plenty of race footage as well as interviews with several LAKC members and Tim ‘Chappy’ Chapman. Racing took place on the ‘Classico’ layout, with a number of repeating winners and drivers earning a sweep in their respective category.

Two-time Adams Motorsports Park TaG Senior class winner Aaron Aguirre helped out his championship chase by adding a third victory on the season. Current point leader Carlee Taylor set the pace in qualifying, besting the 20-kart field with a 38.051-second lap. Round Five winner Andrick Zeen emerged as the winner in the Prefinal, pushing ahead of the field and bringing Matt Johnson with him. The two went back and forth for the lead during the first half of the Final until contact on lap 12 putting Zeen off with a mechanical and Johnson out of the lead group. That allowed Aguirre to assume the lead after waiting in the wings in the third spot the entire time. Aguirre drove to the victory with Shawn Cricca a close second. David Vasquez was third with Johnson recovering to fourth ahead of Henry Morse. 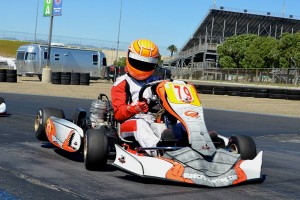 Hannah Grisham became the fifth different driver to win in the Mack Motorsports PRD 2 division this season, putting herself further up in the title chase. Nicky Hays made his class debut with a strong qualifying effort, landing the fast lap of 38.874 seconds to beat out Colby DuBato by 48 thousandths. Hays led all 10 laps of the Prefinal, pulling out to a two-second advantage while Grisham worked her way onto the front row of the main event grid. Round Five winner Dante Yu put himself in the mix for the win in the Final. Hays and Yu ran 1-2 when Yu retired on lap 14, and then Hays on lap 15. This gave Grisham the top spot and the victory. Jared Korth was back by nearly three seconds in the runner-up spot, ahead of Keawn Tandon, Jesse Gutierrez and Justin Hodge.

Tomas Meija ran second in his Fleming Racing Engines Jr. 1 Comer category debut last month, improving one position better with a sweep in Round Six. Meija qualified first with a 43.034-second lap to clear the 17-kart field by two tenths. He then went on to lead wire-to-wire in both the Prefinal and Final, winning his first feature by over five seconds. Round One winner Joseph Daniele won the fight for second over Round Five victor Dakota Tate and Aden Dodge with Brayden Perry earning fifth in his LAKC debut. Chance Gibson continued his win streak in the Empire Karts Jr. 1 Comer Pilot class, making it six for six on the year. Gibson was best in qualifying, but dropped out with three laps remaining in the Prefinal. He bounced back in the main event, grabbing the lead halfway through and pulling away to a nine-second advantage. Cole Morgan drove to second with Prefinal winner Cooper Hicks in third. 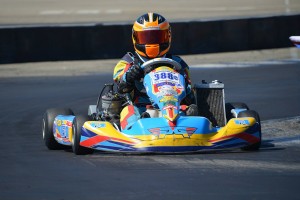 The MMK PRD Senior Pilot division added a second two-time winner on the 2015 LAKC season. Miles Calvin was the first after his win last month, and Drew Zeller became the second with his victory on Sunday. Round Two winner Alyssa Yauncy qualified first against the 13-driver field, edging out Round One victor Ivan Urueta and Zeller by less than eight hundredths of a second. Zeller climbed to the front by the end of the Prefinal for the win before leading all 18 laps in the main event. Urueta ran second, nearly four seconds behind, with Yauney third while Riley Dugan and Calvin completing the top-five.

Erik Jackson returned to his winning ways in the CRG of Southern California TaG Master category, sweeping the day against the 13-driver field. Jackson set the pace in qualifying, then led flag-to-flag in both the Prefinal and Final. Round Five winner Nick De Graaf kept it close until retiring on lap 11, giving the runner-up spot to Frederic Johais. Rounding out the top-five were Tom Ricketts, Roy Steele and David Perisset.

Ryan Schartau extended his point lead in the DR Kart TaG Cadet class with his fourth victory of the season. Schartau completed the sweep on the day, leading after the qualifying session and the seven lap Prefinal. Round Two victor Joseph Daniele challenged for the Final victory, pacing the field the majority of the race before Schartau took back the lead with two laps remaining. Schartau scored the victory over Daniele while Bryce Stevens won the battle for third over Daniel Inzunza and Shea Weston. 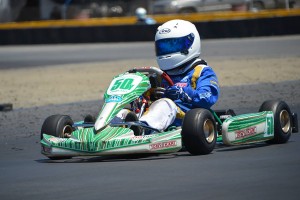 Tomas Meija scored victory in the Junior 1 Comer in only his second start this year (Photo: LAKC.org)

Alan Michel won his second of the season in the PKS S2 Semi-Pro Stock Moto division. Round Four winner swept the day, leading from qualifying to the final checkered flag over Round Five victor Vivek Tandon and Joshua Young. Willy Musgrave made it four straight in the MRC S4 Master Stock Moto class. After losing out on fast time in qualifying to Troy Butts, Musgrave won the Prefinal and Final. Kalvin Chen and Erik Jackson joined him on the podium.

Momentum continued for Aaron Schmitt in the Smokin Fast Racing S3 Novice Stock Moto class, earning his second straight feature victory. Point leader Royal McKee scored the fast time in qualifying, with the top-four posting times within 79 thousandths of a second. Schmitt qualified third, but won the three-driver fight for the Prefinal win. Schmitt escaped the 11-driver field in the Final, leading all 18 laps and pulling out to a seven-second advantage. KC Cook finished second as Josh Early drove to third. Cruz Fiore earned a third victory on the season in the Nash Motorsportz S5 Junior Stock Moto, beating out Prescott Campbell and Ricco Shlaimoun.

Sheldon Andrews returned to the top of the podium in HMS Honda Kid Kart class after missing out on last month’s round of racing. Jesus Vasquez Jr. began the day as the driver to beat, qualifying first and winning the Prefinal. Andrews was second in both on-track sessions. The two fought for the victory in the Final, with Vasquez crossing the line first. Officials however penalized the provisional winner one position, handing the win to Andrews. Dane Idelson was a close third.

The LAKC racing family will gather once again on September 20 for the penultimate round of the season at the CalSpeed facility. For more about the 2015 Los Angeles Karting Championship program, please visit LAKC.org and ‘Like’ them on Facebook.