Oliver Askew Claims First Championship Outside of the United States 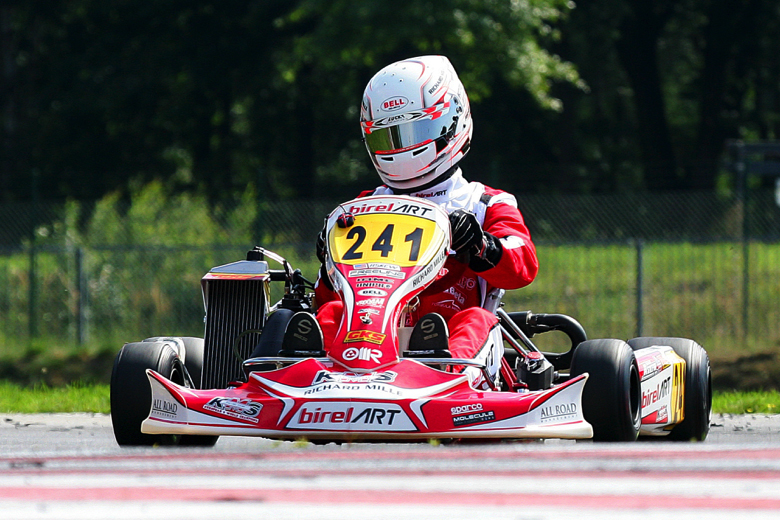 As one of the most decorated karters in North America, Floridian Oliver Askew made a switch early in 2015. Trading in his popular green Tony Kart ride for a red BirelART machine, Askew joined the KMS karting program in his quest for race wins and championships in 2015. Winning races and standing atop the podium in Florida Winter Tour and US Open events stateside, Askew recently claimed his first European victory and in doing so, claimed the championship at the popular BNL series.

“This is a very special victory for me as it is my first win on European soil,” expressed Askew. “With the win on Saturday and the championship on Sunday, this is one, if not the biggest achievement in my karting career.”

Entering the final round of the BNL Series only fourteen markers back and in the third position in the championship chase, Askew and his BirelART outfitted KMS squad were focused and determined to take the title. Practice on Thursday and Friday went well before the two separate race days would take place Saturday and Sunday that included qualifying, two heat races and a main event per day. Championship points would be based on the weekend’s combined main event point totals to determine the overall winner.

“The track conditions were completely changing from day to day,” explained Askew. “We were missing a few tenths on Friday during free practice and ended the day knowing exactly what we needed to go faster. We made a big change Friday night that helped during morning warm up on Saturday; the cooler weather could have played a part also.”

With the heat race flight format in effect, Askew would steer his BirelART to a sixth place effort in qualifying which portrayed to a fourth place starting spot for both heats during Saturday’s wheel-to-wheel competition. Crossing the line second in heat one and seventh in heat two after a bad start, Askew would start the main event in tenth after being penalized in one of the heats for accidental contact. With an uphill battle to the front, Askew was up for the challenge and immediately began his march forward at the drop of the green flag.

Within a few laps, the BirelART driver found himself in fourth; a few lengths back from the leading trio that was beginning to battle hard. With the leader driving a defensive line just past the half way mark, Askew was able to catch the group and quickly make his way into the second position. With four drivers battling hard for the top spot and the leader defending, the quartet entered the chicane after the ‘Europlan’ highway with all four drivers barreling into the corner. After receiving contact from behind, Askew’s kart got into the back of the leader, sending him offline and Askew to the lead. As a result of the contact, Askew was able to break the draft of his fellow competitors, pace them to the checkered flag and take his first European karting victory.

Post race drama would take place at the scales as the early race leader, and Askew’s closest challenger in the series championship, would approach the American after the event. The BNL officials would deem his language and actions intolerable and he was suspended for Sunday’s racing action.

Making more changes on Saturday evening, Askew could feel the speed during Sunday morning’s warmup and then during qualifying where he claimed the pole position by the slightest of margins. Going wire-to-wire in heat one to claim the victory, Askew would be challenged in the second heat of the day where he would battle the top five, but still managed to secure his second heat race win of the day and accompanying pole position for the main event.

Askew added, “All was looking good for the championship, and then the heavens opened ten minutes before the start of the final.”

The KMS crew quickly went to work to put a proper rain setup on Askew’s Birel chassis and before you knew, the drivers had entered the circuit. Starting from the pole position, Askew would cross the line second in very tricky, wet weather conditions.

With the first place finish on Saturday and the second place result on Sunday, Askew was determined to be the weekend winner and top point achiever in the final round. Gaining more than enough points needed to claim the championship, Oliver Askew and BirelART were name the Senior MAX BNL Series Champions.

For more information on Oliver Askew, visit him online at www.OliverAskew.com. Please feel free to contact him via e-mail at OliverAskewRacing@gmail.com, by phone at 561.459.0420 or you can also reach his management team at mike@racingdrivermanagment.com.