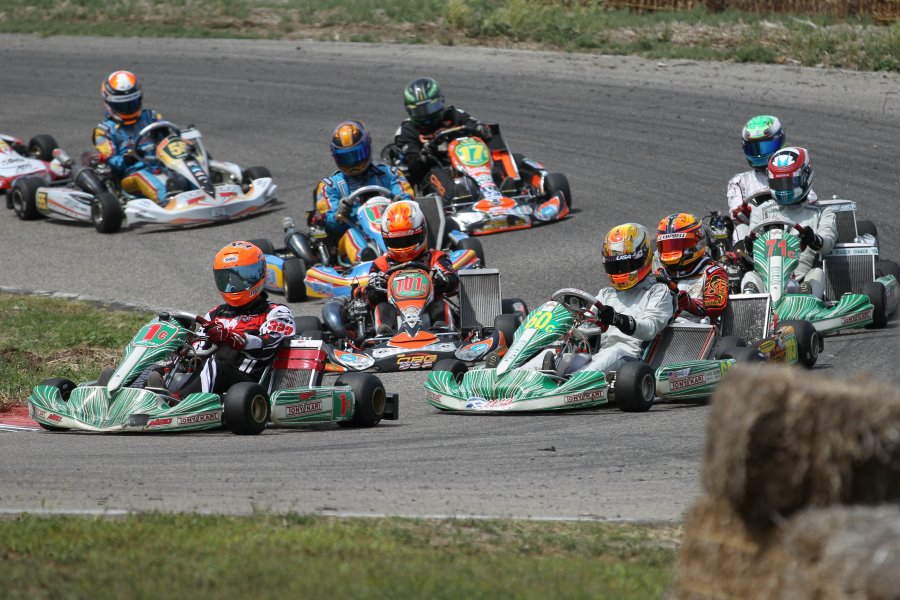 It has been over two months since the California ProKart Challenge was trackside for the 2015 season. After the long break following the Sonoma round in June, the Superkarts! USA flagship regional program returns to action on August 28-29 at the historic Adams Motorsports Park in Riverside, California. The challenging 3/4-mile course has a long history with the sport of karting, and has welcomed the California PKC a number of times. Series competitors are excited to return to action with the penultimate round in the championship chase setting up the storylines heading into the Streets of Lancaster Grand Prix at the end of September.

Christian Brooks and Austin Elliott have won the last three features in the Phil Giebler Racing TaG Senior category, and are the top two contenders in the championship chase. Brooks has two of the wins, putting him at the top of the point standings by just 108 over Elliott. Veteran Matt Johnson is third in the standings, and won last year’s round at Adams. Johnson needs another win to help put himself back into the title chase. Rookie Jarred Campbell continues to lead the Vemme Kart/Extreme Karting S1 Pro Stock Moto point standings. Two wins to open up the season propelled the 2014 S2 SuperNationals winner to the top, with two-time series champion Billy Musgrave closing in the last two rounds. The SummerNationals winner may have the momentum to cut into the 101-point advantage Campbell holds going into Adams.

Carter Williams saw his Ryan Perry Motorsport S2 Semi-Pro Stock Moto win streak come to an end in June at the last California PKC event, making it just three straight to start out the season. Those results have Williams well out in front for the title chase, leading solidly over Jack Freese and Don Whittington. Darren Elliott remains at the top of the SwedeTech Racing Engines S4 Master Stock Moto title chase, thanks to his two wins on the season. Elliott leads Rob Logan by 126 points going into the Adams event, with Willy Musgrave on the outside looking in, needing a win to close back up on the top two.

Four straight podium finishes has Vatche Tatikian still in the number one position for the Mike Manning Karting TaG Master championship fight. Tatikian enjoys a 180-point cushion over Brian Phillipsen. Three different drivers have won in the four opening rounds of the new 2Wild Karting S4 Super Master Stock Moto class, with two-time winner Ken Schilling holding the lead in the championship chase. Schilling has a 154-point advantage ahead of Darrell Tunnell, who has yet to win this season. Kalvin Chen is a close third, and could move up the order with his first win of the year. Three wins have Aaron Schmitt in front of the Professional Kart Support S3 Novice Stock Moto division. Schmitt will look to increase his 265-point lead over Robert Heck Jr.

Callum Smith will take his Sanner Racing S5 Junior Stock Moto win streak into Adams. Smith has won all four main events, in addition to the four Fikse Wheels Pro Tour main events in 2015. Noah Grey and Hunter Kelly are the two top challengers, beating Smith in heat races but unable to triumph in any of the four Finals this season. Junior rookie Trey Brown remains as the top driver in Nash Motorsportz TaG Junior category. Brown took over the point lead after the second round and increased his total with a win in Round Three, but saw his lead lose a few points after a fourth place finish in Sonoma. The gap is just 56 points between he and Round Two winner Nicky Hays.

A second big win on the season at Sonoma for Anthony Willis keeps the Arizona driver on top of the Leading Edge Motorsports TaG Cadet championship. Willis holds a 200-point advantage over Round Two winner Oliver Calvo, with Ryan Schartau and Tomas Mejia in the chase with a best finish of runner-up this season. Leading Edge Motorsports TaG Cadet Rookie has Cole Shade at the top of the standings following his victory in Round Four. Round Two winner George Diakoumopoulos is a close second, just 85 points back – with Aiden Kempf a close third, still looking for the first win of 2015.

Online registration for Round Five of the California ProKart Challenge remains open until Tuesday, August 25 at midnight – with the discounted price of $310 for entry and stamped race tires. Just announced, pit move-in will now begin on Thursday, August 27 at 10am, starting with PKC sponsors, and the track will now offer open practice for $45 from 1pm to 8pm (as the Thursday evening drift event has been cancelled). Gates will close at 8pm, and then re-open Friday morning at 6:30am to resume pit parking. The PKC registration desk will open at 7:00am on Friday morning for check-in and walk-up entries. The official PKC practice day begins on track at 9:00am, running until 5:00pm. There is overnight camping available at no charge; however, there are no reservations required or available. More information regarding host hotels and spectator tickets, in addition to complete race and venue information, can be found at the California PKC Event Page. SKUSA is also encouraging new and returning members to make sure they have an active membership and license to race, along with their pre-approved race number. Competitors are also responsible for bringing their own fuel, and SKUSA encourages all racers and teams to get in touch with their local VP distributor in preparation for the event.