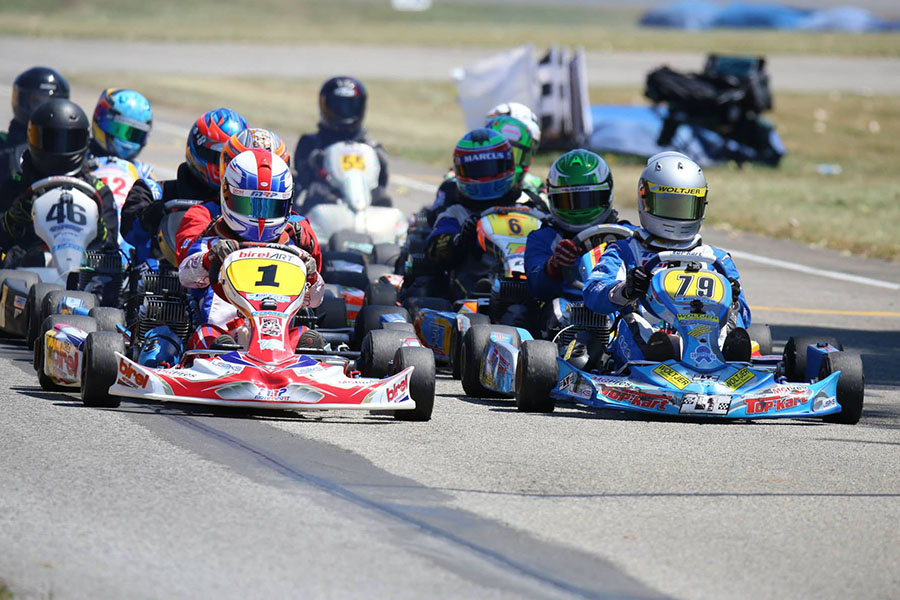 The third season of the United States Pro Kart Series comes to a close this weekend as the 2015 finale is set for the New Castle Motorsports Park, just outside the ‘Racing Capital of the World’ Indianapolis. Opening up in NASCAR country at the GoPro Motorplex, visiting the US Air Motorsports Raceway in Wisconsin, and returning to the Michiana Raceway Park in northern Indiana, the season concludes at the 1-mile New Castle facility for the second straight year. The final two rounds will be contested on Saturday and Sunday, with the eight class champions crowned following the final checkered flag.

The New Castle Motorsports Park is the creation of former IndyCar driver and veteran karter Mark Dismore. NCMP has grown to be the crown jewel of karting in North America in its 12 years of operation, situated on a prime lot just south of the I-70 Interstate at the New Castle exit and roughly 50 miles from the famed yard of bricks at the Indianapolis Motor Speedway. The challenging 1-mile ‘National’ layout provides a great challenge to drivers and teams, and the new location of the start/finish line should result in some great photo finishes.

eKartingNews.com is scheduled to be at the New Castle facility all weekend long, providing the EKN Trackside Live broadcast. Family, friends and race fans can tune into ekartingnews.com/live all weekend to hear live audio from trackside, along with viewing live timing courtesy of Race-Monitor.com. Daily race reports will be published daily on the site’s home page, updates posted to the Official Discussion Thread, along with breaking news, photos and other links on the EKN Facebook, Twitter and Instagram accounts.

Each day will present the drivers with a different format to the checkered flag. Saturday’s round of racing includes the standard qualifying, two heat races, and a Final. Sunday’s action is revamped with a qualifying, Prefinal, Final format to allow for the championship ceremonies to take place that evening. The preview of the weekend’s eight championships is broken up into two parts. Today is focused on the four Yamaha divisions – Pro, Junior Cadet and Rookie – with the four TaG categories reviewed on Wednesday. All the weekend coverage and links can be found at the EKN Event Page. 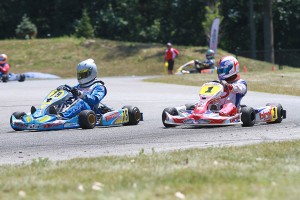 A third different name will claim the Yamaha Pro championship at the USPKS program for a third straight year. The two drivers fighting for the title are young guns Mike McAndrews and Dakota Pesek. McAndrews (BirelART) has shined in his rookie Senior season, especially the last five rounds. The Illinois driver has won three features, along with a runner-up and third place finish to propel himself into the title chase. Pesek (Top Kart) finished his first season (2014) third in the standings, and won twice in the last five rounds. Pesek led going into the South Bend weekend, losing valuable points to McAndrews who won both Finals as the two drivers enter the weekend tied for the championship, with each and every session determining who will leave as the 2015 USPKS champion. Both have previous success at the New Castle facility, with a solid field competing for their own piece of glory on the weekend.

Veteran drivers TJ Koyen and Tony Jump have gone winless in 2015 at USPKS competition. Koyen (Tony Kart) has wins at the Route 66 Sprint Series, including another at New Castle last weekend. Jump (Arrow) recorded his best finishes of the year at South Bend just three weeks ago with two fourth place results. Out of the championship chase, they will battle for the third position in the final standings, along with Nick Landi. The FA Kart driver has two pole positions on the year, with a best finish of runner-up back at Round One. 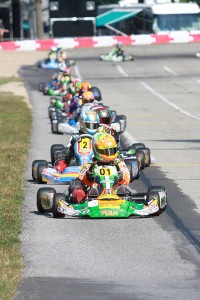 The season has been especially good for Franklin Motorsports / Merlin driver Brandon Lemke. The Wisconsin pilot has five wins in six rounds of racing, including a clean sweep of the weekend three weeks ago in South Bend. That performance boosted his championship lead to 460 points over two-time series champion Zach Holden. The Indy native returns to his home soil, piloting a FA Kart for the second straight event. He holds a comfortable margin over Junior rookies Gio Bromante (Merlin) and Lance Fenderson (Tony Kart). Each experienced some issues in Round Six, losing valuable points to Holden for the vice-championship position. The fight for fifth on the championship podium should go down to the wire with Matthew Northrup (Tony Kart) leading John Paul Southern (Top Kart) and Stephen Dial (Merlin) by a slim margin. David Kalb Jr. (FA Kart) earned his career best finish in South Bend for his 2015 USPKS debut, landing third in Sunday’s final. Kalb could be another podium contender in New Castle, stealing valuable points from the championship podium challengers. 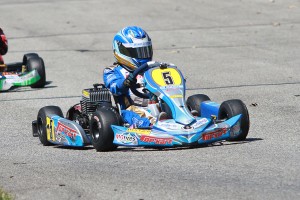 Jason Welage put himself into the championship lead in Yamaha Cadet (Photo: EKN)

It has been a two-driver fight all season for the top position in the Yamaha Cadet championship chase. Sam Mayer has been at the top of the standings, but with each round following the opening weekend, Jason Welage has inched closer and closer, and now leads the fight heading into the finale. An electrical issue struck the 2013 series champ Mayer (Merlin) in the final for Round Six after starting on the pole position. Those last place points dropped him to second in the standings order behind Welage (Top Kart), who took advantage and scored his second victory of the South Bend weekend to give himself a 45-point gap over the former champ.

Waiting in the wings is Florida driver Lachlan DeFrancesco (Benik), as the two-time runner-up finisher holds third in the standings, about 185 markers behind Welage. DeFrancesco has been there all season, with only one bad finish in Mooresville, and some lost chances in the heat races. With the long circuit at New Castle, DeFrancesco just needs to stay within the lead group and steal some points from the top two contenders for a chance to get back into the mix by Sunday afternoon. Cadet rookie Tyler Maxson (Benik) won his first feature in Shawano, and leads the fight for fourth in the standings ahead of Robert Noaker III (Merlin) and Kyle Thome (Merlin), who earned his best result of 2015 with a third in Round Six. 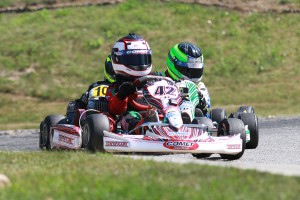 The best racing of the season has come from the youngest kids in the paddock, the Yamaha Rookie division. South Bend weekend provided some amazing finishes and races, but the title chase still remains in the hands of Donald Whorton II. Adding a fourth victory on the season in Round Five, Whorton (Tony Kart) holds a strong 225-point advantage going into the finale weekend. Just two drivers have been able to beat Whorton to the checkered flag in the six main events, Aidan Hinds and Conner Churchill. Hinds (Praga) won the opening day in Shawano, while Churchill (Tony Kart) bagged his first USPKS victory leaving South Bend. Hinds holds a similar margin over Churchill for second, leaving Lucas Smalec (Merlin) and Owen Mahle (Top Kart) to contend for the remaining positions on the championship podium for Sunday evening.