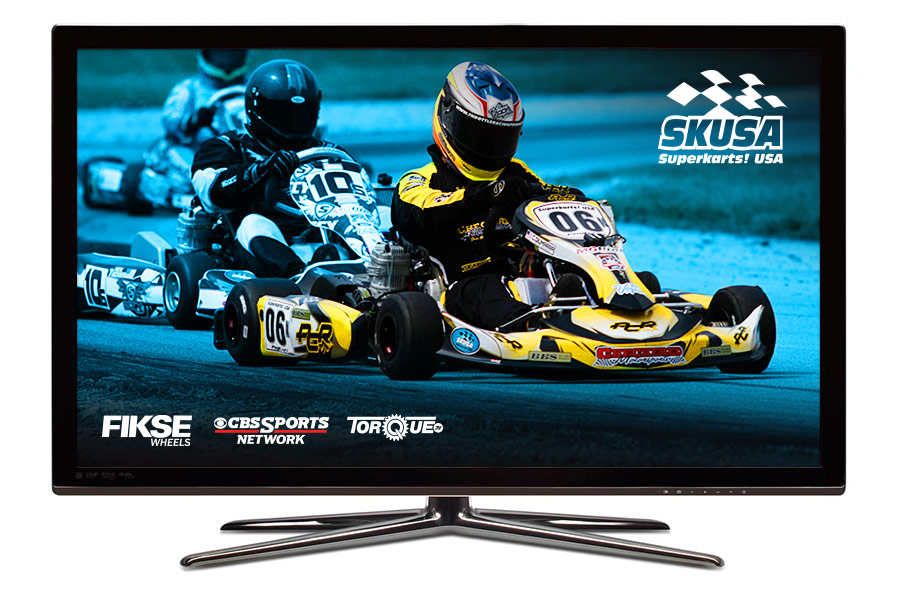 For the last 15 years, there have been countless discussions on the need to put karting on television. The argument has focused on the positive benefits that would be provided in terms of growing the sport and taking it to the public. Superkarts! USA believes in this concept, and as they continue in their position as a leader in the karting industry, always breaking new ground and taking the sport to higher levels, they are blazing the trail once again. Last year, SKUSA made a significant investment in the sport when they put the SuperNationals on the CBS Sports Network as part of a partnership with Greenlight Productions and TorqueTV, and this year’s opening round of the Fikse Wheels Pro Tour – the SpringNationals from Phoenix – was aired in May to kick off a full season of television coverage for the biggest national karting series in North America. The SummerNationals, which was held at the end of July at New Castle Motorsports Park in Indiana, is ready for its spotlight – and SKUSA is pleased to announce the airdates for this coverage.

“For the last six years, we’ve been focused on steadily improving the Pro Tour through new venues, evolving our engine programs and technical regulations, and of course, growing the value of the prizes and purse money that we offer to our racers each year,” confirmed Tom Kutscher, Superkarts! USA President. “And when I get to see what our staff and I have built, displayed on CBS Sports Network, I think that it’s as much of a thrill for me as it is for our racers who are on TV. When I stand back and see what we’re doing, it gets me excited about the future. We’re getting very positive feedback from the shows on CBS, and the production team and my crew have worked hard to evolve the content so that it provides the sport with valuable exposure. I believe the broadcasts just keep getting better, and with partners like Fikse Wheels, we’re going to keep pushing to new heights in 2016 and beyond.”

The first show from the SummerNationals will be broadcast on Saturday, August 22 at 12:00 pm Eastern, and will be re-aired the next day, on Sunday, August 23 at 2:00 pm ET. It will certainly be a ‘Weekend of SKUSA’ on the CBS Sports Network. A third re-airing of the first show on Wednesday, August 26 at 7:00 pm ET will lead into the initial broadcast of Show #2 at 7:30 pm ET, so that SKUSA will have a full hour of exciting primetime positioning. The West Coast will have their primetime slot on August 26 at 8:30 pm PT / 11:30 pm ET. The final scheduled re-airing will be 2:30 am ET on Thursday, April 27.

As with all of the Superkarts! USA Fikse Wheels Pro Tour broadcasts, they will also be available at any time on MotorTrendOnDemand.com. All three shows from the 2015 SuperNationals, and the two SpringNationals events are available for viewing at any time. SKUSA’s fall spectacular – the SuperNationals – will once again be filmed for CBS Sports Network coverage, and in addition to the two separate shows highlighting the on-track action from Las Vegas, there will also be a season review show capping the 2015 Fikse Wheels Pro Tour.