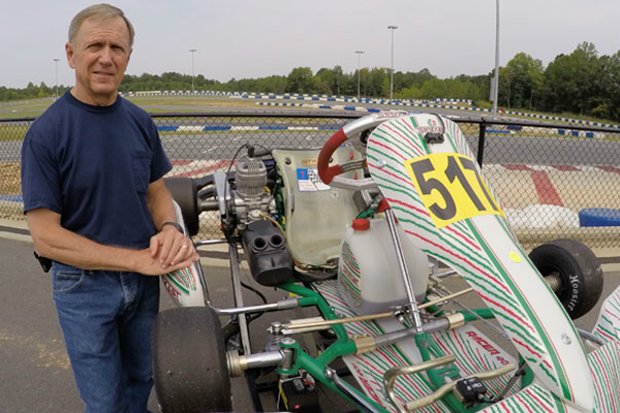 Karting began as a hobby in his parents’ garage, inspired a successful, 19-year career as a professional race car driver and now provides an outlet for maintaining a healthy lifestyle. At 67 years old, Lake Speed’s passion for karting has come full circle.

Karting is and always will be a passion to Lake Speed. However, what few of his current competitors realize is what Lake Speed is to karting.

Our Round Seven GoPro Motorplex Karting Challenge Presented by Hoosier Racing Tire Driver of the Week, Lake Speed, competes in the IAME Senior division against drivers a third of his age; most of whom have no idea that the “old man” as Speed calls himself is a World Karting Champion.

Speed was the 1978 FIA World Karting Champion. That year in Le Mans, France, Speed beat future Formula One champion, the late Aryton Senna, among 100+ other karters from around the world to become the only American to ever win the championship.

“That event is truly the Olympics of karting,” said Speed. “Senna had won some races over there that year. But, I didn’t know him. He was just another guy I couldn’t speak to, couldn’t talk to and had a different kind of uniform on than me. I was leading the race when Senna made a banzai pass at me and missed. He went off course and I went on to win the race.”

Although, Speed names his World Karting Championship as his biggest accomplishment in racing, he also had a successful NASCAR Winston Cup career. He competed for 19 years with 75 top-ten finishes and even won the 1988 Darlington 500.

“I never had the vision that karting would be a stepping stone to something else,” said Speed. “I just wanted to beat all the guys in karting. Where I come from in karting, people would go from the east coast to the west coast just to whip you. That’s all they came for; no money, no trophy. They just wanted to ruin your day. That was the mentality I guess. Just the bragging rights.”

“I’ve tried to play golf a few times and I just can’t put myself through that,” Speed joked. “I’ve been an intense, like to go fast and test the limits kind of person all my life. A few weeks ago, someone said to me, ‘I thought you sold all of your karts.’ I said, ‘Let me tell you something. When I die, I’m still going to have one of these.’ That’s the way I feel about it. It’s exercise for me and a way to work out my body and my brain so I’m not just vegging out on the couch. I just love driving these things.”

Q&A:
Q: Looking back, how did this all start? How did you first get into karting?
A: Amazing story actually. It was Christmas morning and we were opening gifts and heard this loud racket coming down the street. There was a kid going down the street in a go-kart. Santa had brought him a real racing go-kart. That was the beginning of it right there. I said, ‘I’ve got to have one of these!’ It lit a fire under me and I talked my folks into getting my first kart.

Q: What was your first kart?
A: It was a McCulloch kart with a Max 7 engine.

Q: Do you still have it?
A: Oh, no! I wadded it up! (Laughs)
Q: So, fast-forward. When did your karting hobby turn into a serious passion?
A: Starting karting when I did and as a hobby, my parents didn’t support my hobby. I had to work on other people’s karts and engines to support my own karting. I went off to college and worked in real estate with my dad. After that, I just got this wild hair that I wanted to start karting full time. My dad said I was crazy. I opened up a kart shop, even built a track in the backyard. I karted hard for a long time. I just really liked driving karts.

Q: Tell us about your run for a World Karting Championship.
A:  By 1973, I had won about everything in the states; all the big races and prizes. It had lost the glitter. I had heard about the World Championships and I thought, ‘Let’s go clean their clocks too.’ At that time, no one from the U.S. was going over there to compete. We went there the first year and we were so far off the pace that people ridiculed us, even felt sorry for us. We didn’t make the main event. Our self-esteem and pride were below the pavement. We sat out in the parking lot and decided that we could do one of two things: forget about the embarrassment and go home or we could go home and really go to work to redeem ourselves. I worked to find factory support from different chassis and engine builders and we went back the next year and finished 12th and never finished outside the top-six after that.

Q: How did karting transition into racing in the NASCAR Winston Cup Series?
A: I got a call out of nowhere. I was actually about to sign a contract with an open wheel racing team. I went directly from karting to racing stock cars in NASCAR. I went from the littlest racecar on four wheels to the biggest and the best driving thing on four wheels to the worst driving thing with nothing in between. The first time I got in a stock car, the environment in that car and the way it drove was so foreign to me. It was unbelievably weird. I thought to myself, this is so unlike a go-kart that I just need to stop karting so I don’t get confused and concentrate on learning the new environment. Then, once I got into NASCAR, it kept me so busy that I never had time to kart. I didn’t get back in a kart until my NASCAR career was over and had been over for seven years.

Q: How did you first hear about GoPro Motorplex?
A: I think Michael McDowell was the first one to call and tell me about it. I had gotten back into karting a few years before and I was doing a lot of road racing, but then the kart counts really dropped off. It wasn’t any fun to go race against one or two people. When I heard about GoPro Motorplex being built, I thought, ‘Look it here! This is amazing!’ It was going to be a real kart track right here in Mooresville, NC.

Q: You raced a World Championship race at the track that GoPro Motorplex is modeled after, Kartdromo Parma in Italy. Do you see the similarities?
A: Yes, it is really cool. I raced at Parma back in 1977, but I can remember parts of it. The original Parma was flat as a tabletop, so that’s the biggest difference. There are elevation changes here. I remember the first turn through the wiggles and how cool it was to go really fast down the straight away.

Q: What do you hope to accomplish in karting this year?
A: I just want to improve. I realize how old I am and what the odds are of me doing well. I don’t have any unrealistic expectations. What I do want is to learn more about the kart (Speed recently bought a 2015 Tony Kart). Back when I was racing, the karts were so much simpler. Now, every time I go to the track, I feel like I’m sitting down in class. It’s a blast for me to learn. There are so many more adjustments these days.

Q: Do young karters come ask you for advice when you are at the track? What do you tell them?
A: As time has gone on, more and more of the karters come talk to me. They were standoffish at first. I want them to come talk to me! I want to give back to the karting community that gave so much to me. I think a little wisdom can help. If I can help kids have no regrets, I would feel like I did something. I would tell them to not have unrealistic expectations. Karting is just for fun. Go to the track with the right attitude, have fun and do the best you can. At the end of the day, be able to smile at everybody, shake hands with anybody and go home with no regrets.

This Driver of the Week feature is just the short version. It doesn’t begin to include all of the stories Speed kindly shared with us, through the most humbling of times and the most successful of times in his career.

So, next time you see Lake, ask him for the long version, for advice or just for a simple handshake.
We are all lucky to have him at GoPro Motorplex.