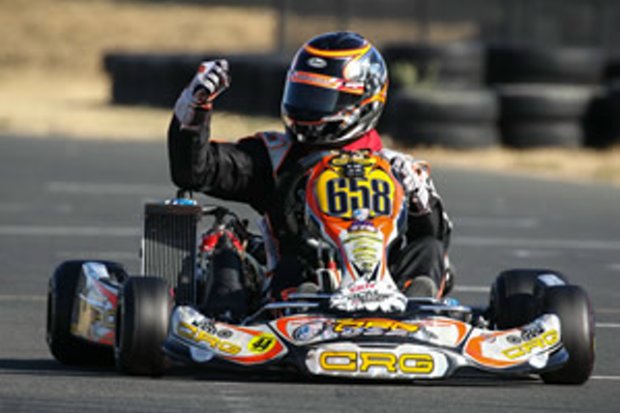 Race #5 brings the Sanzaru Games Karting Championships to the midpoint of the 2015 season. With class championships in full swing, the gloves are starting to come out as every pole position, heat race, and main event podium finish has points ramifications. Full fields, exciting races and some scary looking crashes made the day one to remember!

It was appropriate for the GoPro featured class to be the largest class of the day. SoCal driver Bill Cleavelin came north to try out the series and he adapted well to our fast National track layout by taking the pole just ahead of Bob Olson with Aaron Farris in third. Cleavelin led Olson out of turn one in the first heat, but Bob tagged Cleavelin in the rear bumper in the middle of “tic-tac-toe” and Cleavelin spun around. Billy Scott took the win in the eight-lap race with Olson 2nd. Olson was put back to 5th due to the contact with Cleavelin on lap one and Kelly Heil was moved up the 2nd, with Cameron Evans 3rd and Bill Cleavelin recovering to 4th. In the second heat, Cleavelin took the early lead with Farris getting by Olson. On lap three, Olson started to make the inside pass through the high speed kink before the last turn but he and Ferris touched and the two karts flipped off the track, bringing out the red flag. Both drivers were shaken up but walked away. The karts, however, were not so lucky. Both were written off after the accident. After the restart Cleavelin came home for the win, Heil 2nd David Palic 3rd and Evans 4th. In the Main, Olson sat out the race with Farris returning in a backup kart. Cleavelin took the early lead and never looked back as he drove on to a 7 second win. Billy Scott worked his way around Heil in the late stages of the race to take 2nd, Heil 3rd, Palic 4th and Roman Alexseenkov getting by Evans late in the race to take 5th. For the win, Cleavelin took home the GoPro Hero4 camera and $100 in Sanzaru Bucks with Scott getting $50 and Heil $25 in Sanzaru Bucks. 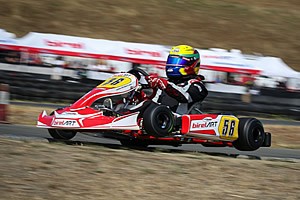 Carter Herrera took the pole in the tough field followed by Colin Mullan and Mason Cohen. Carter led the field out of turn one and drove on to a solid win in the first heat with the next six positions finishing in the same order as they qualified, Colin 2nd, Mason 3rd and Stevie Pugsley Jr 4th. In the second heat, Carter again took the early lead, but Colin stayed close to finish less than a second behind at the checked flag, Mason 3rd and Clayton Williams 4th. In the Main, Carter controlled the front of the race with Colin close behind with Mason and Stevie battling for 3rd. Carter came home the winner, his second win in a row, followed by Colin in 2nd, his best finish of the year, Mason 3rd, Stevie 4th and Clayton 5th. Carter earned $100 in Sanzaru Bucks, Colin $50 and Mason $25.

Eleven drivers took to the track with Bianca Bustamante taking her first pole of the year followed by Oliver Reed and Ryan Tate. It was Bianca, Oliver and Matteo Sandoval running in the lead pack during the first heat, with Tate having some trouble and falling back. Bianca held on to take the win, Oliver 2nd, Matteo 3rd and Bryson Lew 4th. In the second heat, Bianca and Oliver again battled for the lead with three drivers close behind. In spite of having a fastest race lap in the race, Oliver just could not find the place to attempt a pass. Bianca took her second heat win, Oliver 2nd and less than a second back the three drivers of Ryan 3rd, Matteo 4th and Dustin Salaverria 5th. The main event saw Matteo getting by Oliver on the start with Bianca again in the lead. The three of them broke away from the rest of the field when Bianca spun on the last turn coming onto the straight away. Oliver got by Matteo but could got not open up much of a lead with Bryson running in 3rd. The two leaders ran nose to tail up front with Dustin and Ryan getting by Bryson. In the end, Matteo could not find the opportunity to make a pass. Oliver took the win, his first feature win of the year, Matteo a very close 2nd, Dustin 3rd, Ryan 4th and Bryson 5th. Oliver earned $100 of Sanzaru Bucks, $50 to Matteo and $25 to Dustin. 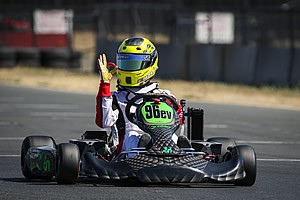 With another large field this class has had great competition all year and this weekend promised to be another tough race. Charles Hastings took the pole ahead of Tom Nelson and Geoff Provo. In the first heat, Hastings and Nelson battled early before Hastings drop out on lap four. Nelson went on to the win with Provo 2nd, Dave Holstein 3rd and Rob Mullaney 4th. Hastings fixed his problem in the first heat, took the lead, and never surrendered it to take the win, Nelson 2nd , Provo 3rd and Roger Cornwall 4th. In the Main, Nelson took the lead from the pole position with Hastings right behind. Nelson ran a strong race and made no mistakes as Hastings could not match the leader’s speed. In the end, Nelson took the win, Hastings 2nd, Provo a steady day in 3rd, Cornwall 4th and Rob Mullaney 5th. The top three received the $100/$50/$25 in Sanzaru Bucks.

Roger Cornwall took the pole ahead of Allen Miller and Tom Nelson. In the first heat, Cornwall took the early lead and controlled the pace to take the win. Nelson got by Miller and stayed close to come home 2nd, with four drivers battling for the 3rd position. In the end, Rob Mullaney won the battle for 3rd with Geoff Provo coming home 4th. In the second heat, Cornwall took the early lead but was under pressure early with Nelson and Miller getting by. Miller pressured Nelson to the end but just could not find the way by. Nelson took the win, Miller 2nd, Cornwall 3rd and Mullaney 4th. In the Main, Nelson took the lead off the start with Cornwall and Miller close behind. Nelson drove flawlessly, taking a convincing win with Cornwall 2nd, Miller 3rd, Mullaney 4th, and Provo 5th. Nelson earned the $100 in Sanzaru Bucks, $50 to Cornwall and $25 to Miller. 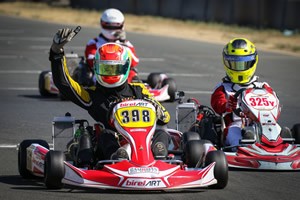 A strong group of eleven drivers took to the track with Enzo Prevost taking pole ahead of Jared Higham and Jarrett Lile. Race favorite Phillippe Denes qualified last due to a flat tire. In the first heat, the top three qualifiers pulled away from the rest of the field and had their own private duel. The race results were similar to qualifying; Prevost taking the win, Higham 2nd, Lile 3rd, Nic LeDuc 4th and Denes working his way from last to 7th. In the second heat, Higham got shuffled back after exiting turn one, Denes charged through the field quickly with the field exchanging positions throughout the race. Amazingly Denes worked his way past all the leaders and took the lead late in the race to take the win, Lile was right on Denes heals to take 2nd, Prevost 3rd and LeDuc 4th. The main turned into a three-kart battle with Prevost, LeDuc, and Denes in the battle for the lead. Denes had to first get by LeDuc and then managed to take the lead from Prevost late in the race. Denes took the win just 86/1000th in front of Prevost, Prevost 2nd, LeDuc 3rd. The battle behind the top three was just as intense with Lile finishing 4th and Higham 5th. Denes earns $100 of Sanzaru Bucks, $50 to Prevost and $25 to LeDuc.

Owen McAllister took the pole in this fast group of young racers, Sebastiaan Mulder was 2nd and Skyler Geczi 3rd. Heat one saw Owen take the lead at the drop of the green flag followed by Sebastiaan with Geczi falling back. Gino Sandoval, Garrette Randolph Jr, and Christian Legaspi battled for 3rd. Owen took a one second win, Sebastiaan 2nd, Gino 3rd, Garrette 4th and Legaspi 5th. In the second heat, Owen again led the field out of turn one and then pulled away to a small lead. Garrette challenged Sebastiaan with Legaspi close behind. In the end, Owen took the win, Sebastiaan held on to take 2nd, Garrette 3rd, Christian 4th and Skyler 5th. Beating Owen in the main looked near impossible, and as expected, Owen took the early lead, with Garrette getting by Sebastiaan and Gino working his way through the field after starting 7th. As the race wore on, Owen pulled away from the field and Gino continued to pass more drivers. At race end, Owen took a convincing win, Gino raced his way into 2nd, Garrette 3rd, Christian 4th, Skyler 5th and Sebastiaan salvaging 6th. Owen earned $100 of Sanzaru Bucks, $50 to Gino and $25 to Garrette. 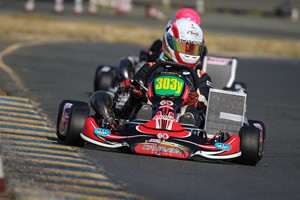 In the first heat, Pablo and Hunter were out front after the start with Arnstein and Bennett battling for the Masters lead. A fast starting Morton led the CRF 250 karts with a 125 Masters kart already splitting him and Richard Stock in the second CRF250 kart. At the end of lap three, Stock contacted the right rear tire of Masters Rene Martinelli and Rene was instantly spun into the tire wall at the very fast kink on the front straight. The hard hit brought out the red flag to check on Rene and clean up the debris. Rene was a little beaten up but surprisingly would return to the competition later in the day. Once the track was cleaned up, the race was restarted. Pablo came home the winner, Hunter 2nd, Arnstein 3rd, Morton 4th and Bennett 5th. Before the second heat, it was decided to run the 125 and 250 karts in separate races due to the amazing launch the CRF 250 have off the line.

The second heat for the 125 karts saw Pickett getting the lead and holding it to the end to win the race, Pablo 2nd with Justin Bennett coming home 3rd to take the Masters class win, Kevin Woods 4th and Arnstein 5th.

In the Honda 125 Main, Pablo took the early lead over Pickett. Pickett made a pass for the lead but Pablo retook the lead. Pickett stayed close put was not able to find a safe way by and had to settle for the 2nd position at race end. In the Masters class, Arnstein was in the lead early but eventually a strong Bennett got by. Woods then tried to make a move on Arnstein with Martinelli following Woods. Martinelli tagged Woods and spinning him out, with Arnstein going by both karts to take 2nd place back. In the end, Pablo held on to take the win over Pickett with Bennett in 3rd and winning the Masters class, Arnstein 4th and Molinatti 5th. Pablo and Bennett earned $300 of Honda HPD Bucks, $200 to Pickett and Arnstein and $100 to Molinatti.

Morton took the early lead in the second heat, but was hounded the entire eight laps by Richard Stock and Steve Cameron. Stock was not able to find any way by thus Morton took the win, Stock 2nd, Cameron 3rd. In the Main, Cameron got the jump and took the lead at turn one, it was short lived as Morton again took the early lead and pulled away to a five second win over Stock. Morton earned $500 in Honda HPD Bucks, Stock $300 and Hilleman $200.

Round Six of the Sanzaru Games Karting Championships will be August 16 where the track configuration will be the Sprint Track and the GoPro Feature class will be the EVO Electrics.

Results and points can be viewed on the Sanzaru Karting web site at sanzarukarting.com/racing.html.