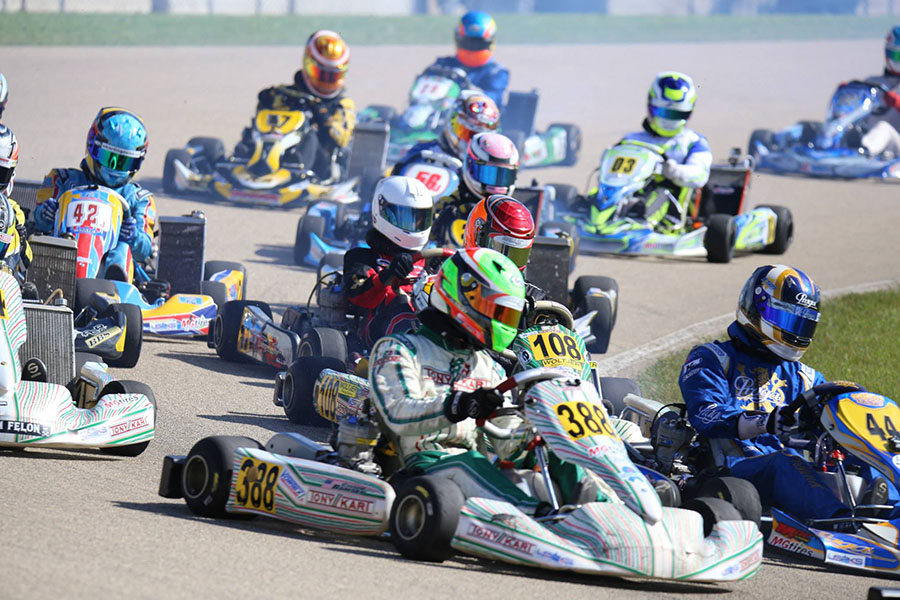 eKartingNews.com is scheduled to be in Shawano all weekend long, providing the EKN Trackside Live broadcast. Family, friends and race fans can tune into ekartingnews.com/live all weekend to hear live audio from trackside, along with viewing live timing courtesy of Race-Monitor.com. Daily race reports will be published daily on the site’s home page, updates posted to the Official Discussion Thread, along with breaking news, photos and other links on the EKN Facebook, Twitter and Instagram accounts.

Tuesday, EKN began the preview series with a look at the Mini Rok Cadet, Yamaha Cadet and Yamaha Rookie divisions. The Leopard Junior and Yamaha Junior contenders in addition to the new Rok Cup category was the focus on Wednesday. Today is reserved for the Leopard Pro and Yamaha Pro categories. 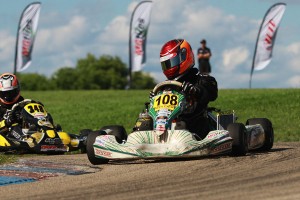 The Leopard Pro championship is still anyone’s for the taking, with eight drivers within 300 points at the halfway point. With over 310 points up for grabs with a sweep in any of the four remaining rounds of racing, it is anyone’s race. A driver that performs at their best will finish the New Castle event in three weeks as the third different champion in the series’ three-year history. Leading the charge as he was following the Mooresville weekend is Brandon Jarsocrak. The Tony Kart driver earned the most points at the GoPro Motorplex, earning his first class victory in Round Two. While the speed was there in Shawano, a mechanical issue forced retirement on Saturday as he bounced back to P4 Saturday to remain the championship leader.

Trailing the Pennsylvania driver in the standings by a slim 51 points is Dustin Stross. The Florida Tony Kart pilot finished third in last year’s championship chase, and is still searching for that elusive Leopard Pro victory. A string three top-five finishes, including runner-up in Round Four pushed him to the second spot in the points, jumping ahead of Jacob Donald. The KartSport North America / Praga pilot won the opening stage, finishing runner-up to Jarsocrak the following day. After opening up as the fast driver in qualifying in Shawano, the weekend went downhill from there. Donald now finds himself 136 points out of first. Also showing the speed throughout the first two weekends is Andrew Bujdoso and Andrick Zeen. Bujdoso was a contender in Mooresville, and found his way to a podium result in Shawano. Bad luck seems to lurk over the PCR driver from Ohio, with the hopes of removing the curse in South Bend where the chassis has found success before. California driver Zeen also has one podium finish to his credit, struggling with engine issues throughout the Shawano weekend. The Praga North America driver made his debut with the team a year ago at South Bend, and remains in the title chase just 166 markers out of first.

Last year’s finale winner Elliot Finlayson moved up the order in the standings after his performance in Shawano. Now sixth in the title chase after piloting a bent machine to fifth on Saturday and third in a new frame on Sunday. The first two weekends were aboard a Tony Kart, and the Illinois driver is now piloting a CompKart and its South Bend for the first time aboard the new colors. PCR driver Ryan Norberg is the top rookie of 2015 at the halfway point. A fourth place in Mooresville is his best result, posting top-10 results in Shawano to help him stay within reach of the top-five in points. Colton Ramsey had his best run in the Leopard Pro category as the Tony Kart was runner-up on Saturday in Round Three and finished fifth in Round Four. Competing in both Pro and Rok GP Senior could keep the Illinois driver in rhythm toward his first series victory.

Drivers to watch include the return of 2014 champion AJ Myers. The PCR pilot is back in the United States after spending time with the factory team in Italy. Myers won at South Bend last year, which triggered his run to the title as the Florida driver could play spoiler for some in this year’s chase. Armin Cavkusic won both Route 66 Sprint Series features two weeks ago aboard a Franklin Motorsports FA Kart entry. With a few more at-track entries, the Leopard Pro will eclipse the 30-driver mark for the seventh straight event, dating back to the 2014 opener. 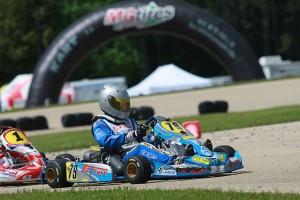 Dakota Pesek has become the lead contender in Yamaha Pro, winning two of the four features in 2015 (Photo: EKN)

For the first time since the beginning of 2014, a new name is at the top of the Yamaha Pro division. Dakota Pesek has assumed the lead position in the championship chase, demoting 2014 champion Brandon Jarsocrak. Pesek is only the third driver to lead the Yamaha Pro standings in USPKS history, with Joel Jens going wire-to-wire in 2013, and the same for Jarsocrak in 2014. Pesek added a second victory to the season on Sunday in Shawano last month to move the Top Kart pilot as the lead driver in the title chase. Pesek now has the front seat to the championship crown with Jarsocrak removing himself from the category to put all his efforts in the Leopard Pro category.

Joining Pesek at the top of the standings is Senior rookie Mike McAndrews. The BirelART driver dominated the Round Three feature race, landing himself a third straight podium finish the following day. Home track advantage may come into play this weekend at South Bend, as the Illinois driver has plenty of laps around the challenging circuit. Veteran TJ Koyen is just a few corners away from earning his first USPKS victory. Moving back to the Yamaha after two years in Leopard, Koyen is more relaxed and using his knowledge to remain a contender, finishing runner-up in Round Three and third in the rain soaked opening round in Mooresville. The Tony Kart driver won both feature races during the Route 66 Sprint Series event two weeks ago, making him a contender out of the trailer. Nick Landi assumes the fourth position in the points chase, trailing by 335 points as the FA Kart driver will need a big weekend to close up on the top three.

The weekend in South Bend marks the return of Derek Dignan (FA Kart) to the category. Dignan finished fourth in last year’s Yamaha Pro standings, and will remain running double duty on the weekend, moving from Leopard back to Yamaha, while still competing in the new Rok GP Senior class. His KartSport North America teammate Tony Jump (Arrow) won last year in South Bend, and the Arrow driver is hoping for a return to the top step of the podium. California driver Andrew Wiener will become the first Formula K chassis in USPKS competition, making a return to the MRP facility after racing in last year’s event.