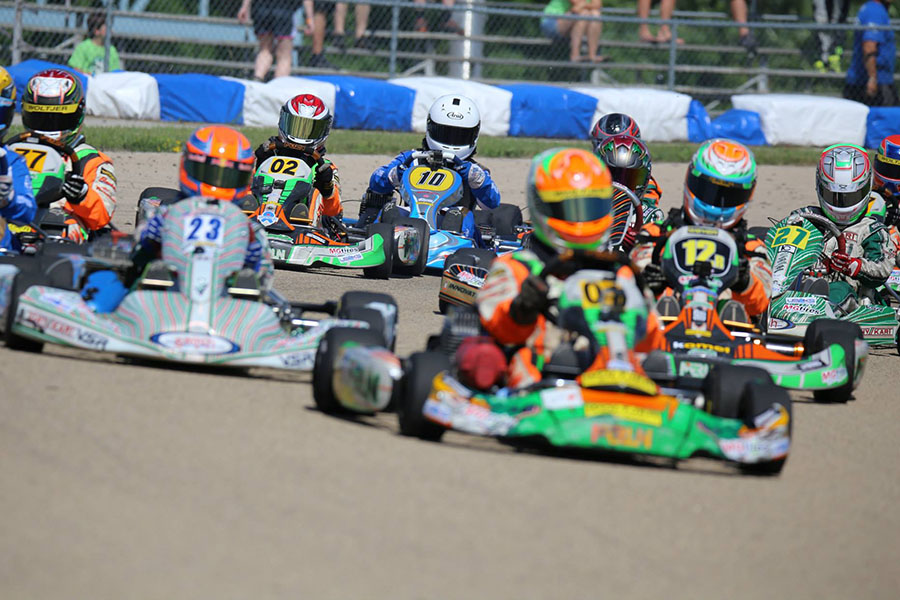 eKartingNews.com is scheduled to be in Shawano all weekend long, providing the EKN Trackside Live broadcast. Family, friends and race fans can tune into ekartingnews.com/live all weekend to hear live audio from trackside, along with viewing live timing courtesy of Race-Monitor.com. Daily race reports will be published daily on the site’s home page, updates posted to the Official Discussion Thread, along with breaking news, photos and other links on the EKN Facebook, Twitter and Instagram accounts.

Tuesday, EKN began the preview series with a look at the Mini Rok Cadet, Yamaha Cadet and Yamaha Rookie divisions. The Leopard Junior and Yamaha Junior contenders in addition to the new Rok Cup category is the focus today. Thursday is reserved for the Leopard Pro and Yamaha Pro categories. 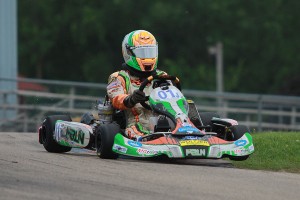 Brandon Lemke has been near perfect in the Leopard Junior division (Photo: EKN)

The first half of the 2015 season in Leopard Junior has belonged to Brandon Lemke. The Franklin Motorsports / Merlin driver nearly swept all the on-track sessions in the four rounds, missing out on the fast lap of qualifying in Round Three. That has the Wisconsin driver 10 points short of a perfect score through the first half of the season, and a large margin in the championship chase. Zach Holden is the only driver to beat Lemke in an on-track session thus far, and finds himself 350 points back in the point standings. Holden has four top-five finishes on the season, including a runner-up on Round Three and third place in the opening round. The up and down finishes of the heat races have Holden losing points to Lemke each and every session. The Indy driver made a recent change from the Top Kart brand to a Tony Kart, finding success last weekend at the SKUSA SummerNationals.

Junior rookies round out the top-five, led by Gio Bromante. After a challenging GoPro Motorplex weekend, the Franklin Motorsport / Merlin driver performed his best with a third and second in the two feature races in Shawano. Lance Fenderson (Tony Kart) has shown the speed to contend, coming away with a best fourth place result last month after earning a third-place result in Mooresville. He finds himself fourth in the standings ahead of fellow northeast driver Michael d’Orlando. The Tony Kart driver recorded his best finish in Round Four, earning third in the Final to position himself inside the top-five of the championship chase. 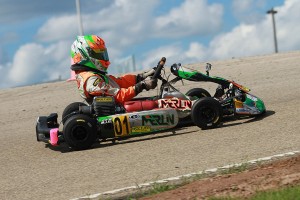 Brandon Lemke has risen to the top of the Yamaha Junior championship standings (Photo: EKN)

Brandon Lemke has shown the way in the standings in the Yamaha Junior division since the first checkered flag. Winning Round One at the GoPro Motorplex, the Franklin Motorsport / Merlin driver escaped with the championship lead, adding to his lead with two victories at the US Air Motorsports Raceway last month. Despite all the shuffling over the course of four rounds with some great racing by the 12-15 year-old drivers, Lemke holds a strong 280-point advantage going into the second half of the season.

Zach Holden finds himself in the lead challenger position in the Yamaha category, just like the Leopard division. Holden has three podium finishes and one DNF to his credit. Like the Leopard class, the Indy driver is moving over to an OTK chassis, sporting an FA Kart in Yamaha. The only driver to beat Lemke in a feature race at USPKS competition this year is Gio Bromante. The Franklin Motorsport / Merlin driver slipped by for the victory in Round Two. The New York driver backed it up with a runner-up finish in Round Four. Fellow Junior rookies Lance Fenderson (Tony Kart) and John Paul Southern (Top Kart) make up the top-five in the current point standings. Fenderson has a few heat wins and a best main event finish of third in the Round Three event. Southern, jumping up to Junior competition at the end of last year, has three top-five finishes thus far. 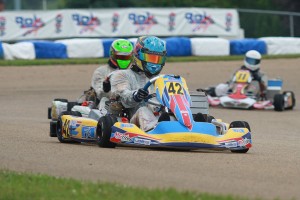 Added to the USPKS program in Shawano, the Rok GP Senior division will award a ticket to the Rok Cup International Final later this year to the championship winner. The format of qualifying, three heat races, a Prefinal and Final give plenty of opportunity to earn points toward the USPKS championship and a chance at the ticket. Leading the way thus far is Michigan’s Derek Dignan. The KartSport North America / FA Kart pilot won the Prefinal and Final to position himself at the top of the standings heading into South Bend. Florida driver Dustin Stross (Tony Kart) and Colton Ramsey (Tony Kart) are locked for the second position, each trailing by 25 points. Ramsey won the opening heat race and was second in the Prefinal, while Stross took the runner-up position in the Final after winning two of the three heat races. Colin Warren (DR Kart) along with a handful of others will challenge in South Bend.