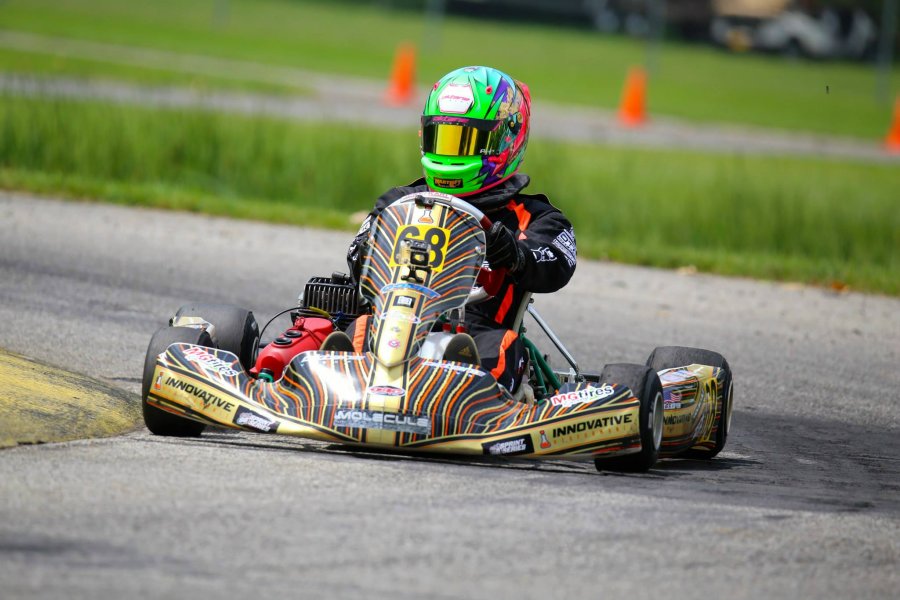 The Route 66 Sprint Series continued its 15th year anniversary season with Round Five and Six contested at the Michiana Raceway Park in North Liberty, Indiana. The challenging circuit just outside the South Bend area welcomed another large turnout, feature over 250 entries for the two days of competition. Weather played a factor once again, this time with severe weather cancelling the final three main events on Saturday. Thankfully, the weather cleared for Sunday’s action, as a handful of drivers earned multiple victories on the weekend.

Once again it was the RLV Yamaha 100 Senior division that led the 10 categories in terms of entries, welcoming a strong 25 in South Bend. Coming off a win on day two in Shawano, TJ Koyen extended his win streak to three with a double victory weekend, taking over the championship lead. The lead challenger on the weekend was Colton Griffin, scoring the fast time in qualifying for Saturday’s round of action. Koyen qualified second, off by over a tenth of a second. Griffin set the pace for the first half of the Prefinal, with Koyen taking over the point for the second half, scoring the win with Griffin on this bumper. From the drop of the green flag, Koyen led all 12 laps of the Final for his first victory of the weekend. Griffin was a close second with Eric Bartsch third. Adam Crepin and Jimmy Clark completed the top-five. Steven Arens jumped up the order Sunday morning, stealing the fast time from Koyen by a slim 29 thousandths of a second. Arens led the opening two laps of the Prefinal before Koyen took control of the top spot en route to the win. Koyen went wire-to-wire from the pole position to earn a second Final victory on the weekend. Griffin pushed Arens back to third with Bartsch fourth and Crepin fifth. 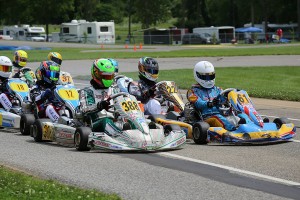 Armin Cavkusic (#61) doubled up for his first wins of the season in Leopard Senior (Photo: Kathy Churchill – Route66kartracing.com)

The competitive Franklin Motorsports Leopard Senior category welcomed its fifth different winner of the season as Armin Cavkusic doubled up on the weekend. Cavkusic swept the opening round on Saturday, leading from qualifying to the checkered flag in the main event. Colton Ramsey kept the pressure on in the Prefinal, with Armin earning the win. Ramsey took the lead from the start of the Final, and led until two laps remaining when Cavkusic took back the top spot. He held on to score his first victory of the season, with Ramsey in second. Josh Hotz ran to third with sisters Kindra Hurlbert and Emily Hurlbert completing the top-five. Ramsey began Sunday on top, edging out Cavkusic by just 83 thousandths in the qualifying session. Armin took control in the Prefinal, scoring the win and going on to the victory in the Final. Hotz and Kindra Hurlbert slipped past Ramsey to move up the podium while Anthony Granata rounded out the top-five.

Alex Bertagnoli was credited with three victories on the weekend. Bertagnoli swept the weekend in the CKT Racing Engines Leopard Junior division to extend his championship lead. Porter Weisensel and Aaron Bromberek ran second and third in both main events. Bertagnoli then was named the winner in Saturday’s round of the Woltjer Racing Engines Yamaha 100 Junior class. Bertagnoli won the Prefinal and the class was one that could not complete the Final due to the weather. Bertagnoli was named the winner with top qualifier Matthew Northrop second and Maks Kowalski third. Stephen Dial and Dillon Schwanbeck rounded out the top-five. Sunday, Northrop swept the action against the 17 other drivers. The Final victory was his first of the season, crossing the line one-second ahead of Schwanbeck. Kowalski was third with Bertagnoli fourth and with two-time race winner Michael Paterno fifth. 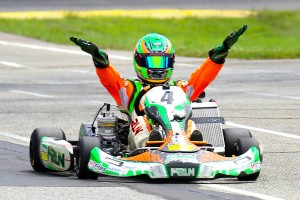 Sam Mayer was a second driver earning three victories in South Bend. Mayer doubled up in the Haddock LTD/Comet Kart Sales Komet Cadet division, growing his win total to three in the class. Kyle Thome broke up the perfect weekend, posting a blistering lap in qualifying to secure the pole position for the Prefinal. Mayer was able to secure the top spot in the eight-lap event, and with the Final cancelled due to weather, was declared the feature winner. Thome and JJ Hansen completed the podium. Mayer then swept the action on Sunday, qualifying first and leading wire-to-wire in the Prefinal and Final. Aidan Harrington and Taylor Maas joined Mayer on the podium for Sunday’s ceremonies.

Mayer’s third victory of the weekend came in the Switch Racing Engines Yamaha Cadet class, following Sunday’s action. Saturday looked to belong to Mayer, qualifying first and holding off Aidan Harrington at the line for the Prefinal win. Kyle Thome joined the fight at the front, making it a three-driver battle for the Final. Mayer crossed the line in the first position every lap, including the final circuit to be the provisional winner. Contact however during the race by Mayer resulted in a one position penalty, handing the win to Harrington. Mayer was classified second with Thome third. Parker Abed and Talan Drake made up the top-five. Sunday, Mayer bounced back to sweep the day for his third victory of the weekend. After qualifying first, Mayer won the Prefinal and the Final with a last lap pass. Harrington finished second ahead of Drake, Tristan Farber and Taylor Maas. 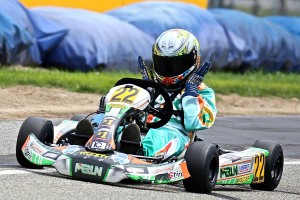 The win total for Stephen Dial grew to five in the Express Karts & Parts Komet category after a double win weekend. Dial found himself chasing Michael Paterno in qualifying and the Prefinal to begin Round Five. Paterno led the first eight laps before Dial took over the point, going on to take the checkered flag first. Round Three winner Ryan Weyer slipped past Paterno for the second step on the podium. Dial went on to sweep Round Six action on Sunday, leading from qualifying to the final checkered flag, earning the Final victory by five seconds over Weyer with Delaney Keaveny.

Indy Ragan and Aidan Hinds complete the list of double winners on the weekend. Ragan won his first feature of the season in the Hollywood Crane Service Kid Kart division. Ashton Henckel was the top dog early on, posting a very fast lap in qualifying. Ragan caught up during the Prefinal, scoring the win and continuing on to win the Final with a last lap pass. Cooper Christ finished second with Kruze Miles in third after Henckel retired after one lap. Henckel was quick again on Sunday, laying down a monster lap in qualifying and driving to a 11-second win in the Prefinal. The pace evened out in the Final for Ragan, securing the lead late in the race and earning the victory. Henckel stood on the podium in second with Hugo Bonjour in third. 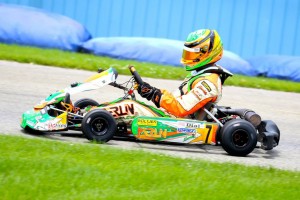 Hinds nearly swept the weekend in the Tony Kart Micro Rok category to bring his win total up to four on the season. After qualifying first, Hinds led all eight laps of the Prefinal, which in turn gave him the feature victory after it was called due to weather. Two-time winner Keegan Bosch was runner-up with Zach Collins classified in third. The perfect score was broken up by Bosch in Sunday qualifying. Hinds come back to win the Prefinal and went green-to-checkered in the Final for the victory. Bosch earned his third runner-up result of the season, with Camrin Cass up to third.

The KartLift Yamaha 100 Rookie division welcomed 18 drivers in South Bend with Ben Chejfec and Christian Miles splitting the victories. Saturday was all Chejfec, as he set the pace in qualifying, came out the Prefinal the winner, and led all 12 laps of the Final. Aidan Hinds drove a close second with Chester Brimer in third. Miles and Alex Grapsas completed the top-five. The tables turned Sunday with Brimer coming out of qualifying with the fast lap, edging out Collins and Matthew Novak by a slim seven hundredths. Miles ended up fourth in the session, and climbed his way to the win in the Prefinal. Losing the lead to Hinds on the opening circuit of the Final, Miles reclaimed the position and led the remaining laps to earn his first victory of the season. Bryce Mersberger drove to the runner-up position, pushing Hinds to third with Camrin Cass fourth and Chejfec fifth. 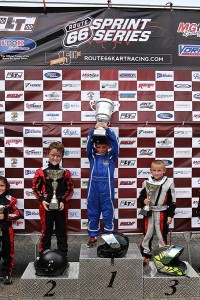 The fourth event on the 2015 Route 66 Sprint Series program is scheduled for August 14-16 at the New Castle Motorsports Park in central Indiana. The race will serve as a great warm-up event for the United States Pro Kart Series competitors, hosting the season finale at the facility the following weekend. For more information on the Route 66 Sprint Series, head to route66kartracing.com.