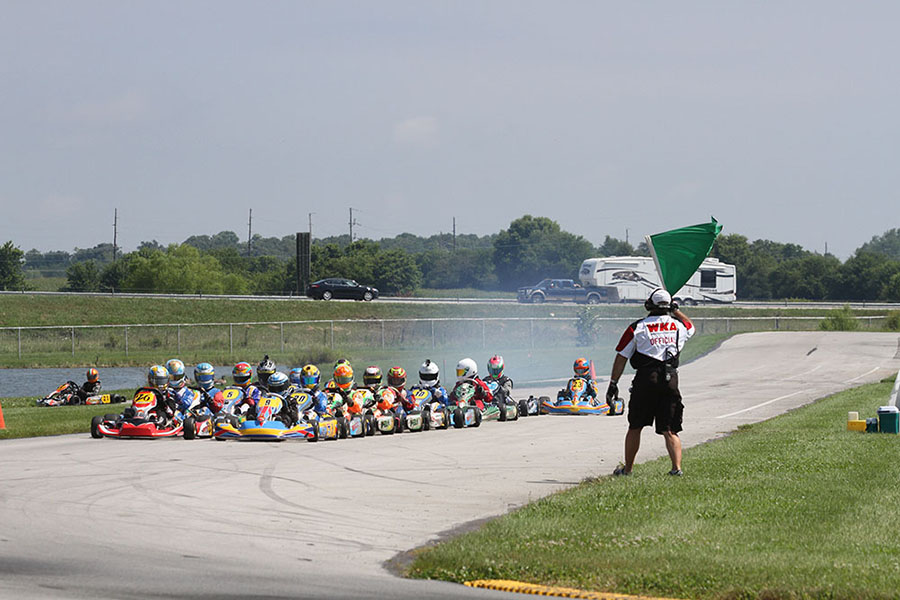 Race #4 for the Bridgestone Manufacturers Cup Series found quite a bit of parity, as the battle for national titles tightened up in the McLaughlin Motorsports Nationals at New Castle Motorsports Park in Indiana.

Drivers were greeted with a change in the scoring line at the track, as competitors would have an even harder run up the final long straightaway coming back from Interstate 70, taking the checkers on the long stretch instead of racing to one final tight corner after racing up the fastest straightaway on the track. Traditionally known to be the deciding factor in the outcome of events with drivers outdueling the other, competitors had to rely on raw horsepower, a partial draft, and a slingshot move to vie for the top honors.

The end result were some of the closest finishes and hair-raising moments for fans and competitors.

With heat index numbers soaring past 100 for the weekend, Brandon Lemke was the only driver to find success at the top twice, taking both the Woltjer Racing Engines Yamaha Junior Class, as well as the KartSport North America Pro IAME Junior Division.

For Lemke, his day started with the Yamaha Junior class. After getting by Streeter Super Stands Fast time winner Zack Pretorius, the Merlin driver edged out to a comfortable margin, taking the top honors over New Castle product Zach Holden, with John Paul Southern Jr, Drew Lindley, and Gio Bromante rounding out the top 5.

The decision for Robert Noaker III to run New Castle paid off well in the Comet Kart Sales Yamaha Sportsman Class. Struggling with the decision to visit family or stay in contention for the Yamaha Sportsman title ended with Noaker taking the win on Sunday. The victory by no means was an easy one as Noaker had to out haul Jason Welage  and Streeter Super Stands Fast Timer Gage Rodgers for the top honors. Tyler Ferris and Kaden Wharff completed the top five in a battle that saw these five go back and forth throughout the entire 15 lap distance. 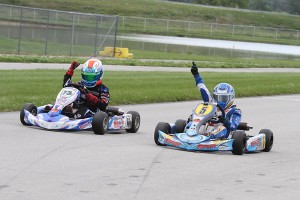 Not to be shut out of victory lane for the weekend, Welage scored the win in the IAME USA Swift Cup Class. Running as a Local Option Class in 2015, the Swift Cup has turned into the event that has fans clinging to the fence this year, as 26 competitors signed into the paddock. But when it was all said and done, Welage stood atop the podium for yet another time, claiming another event win, besting Anthony Willis, Reese Gold, Lachlan DeFrancesco, and Streeter Super Stands Fast Time winner Connor Ferris.

Sam Cate was the first driver of the weekend to claim a check, taking down the competition in the Tillotson Pro X30 Senior Class. Following a spirited battle with Streeter Super Stands Fast Time winner Alexander Kardashian and Derek Dignan, Cate laid claim to the $1,000 top prize for the weekend, with Kardashian taking home $500 for second. For his third place efforts, Dignan took home a set of Bridgestone tires. Austin McCusker and Roger Ralston completed the top 5.

As the saying goes, it only takes 2 karts to make a race exciting. Well, add one more, and the Zero Error Racing Yamaha Senior Pipe had fans on the edge of their seats the entire weekend, through 3 heat races, the Pre Final, and final event. All year long it’s been a great battle between Dakota Pesek and Derek Hughes. The previous 2 races have found Tony Peterson adding to the mix. Through all the back and forth battles between the 3, Pesek, the Streeter Super Stands Fast Time Winner, cam e out on top, with Hughes and Peterson the top 3. 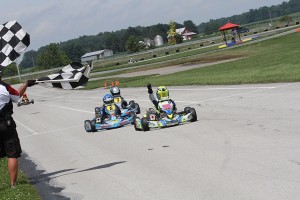 All season long, Luca Mars has been lurking in the shadows as one of the top drivers in the DRT Racing Pro TaG Sportsman class. Sundays main event finally paid off big for Mars as took the checkered flag, along with the $500 payday that went with it. Mars fended off Jason Welage and Streeter Super Stands Fast Time winner Connor Ferris for the top honors with Kaden Wharff and Robert Noaker III completing the top 5. Welage received $250 for his second place effort while Ferris won a set of Bridgestone Tires.

As always, the CRP Racing Kid Kart Class did not disappoint. Sporting yet another large field, Benjamin Maier took his turn atop the podium, claiming the victory over the weekend. While the Kid Karts run a shorter course at New Castle compared to the other national classes, the insertion of the Monza made for some exciting times on the track, as competitors had more than just the long straight-aways to deal with. Chasing Maier across the stripe were Danny Dyszelski, Adam Brickley, Ava Dutton, and Addison Iannielo, as the girls flexed their muscle in this class for the weekend with Sofia D’Arrigo taking the Streeter Super Stands Fast Time award. 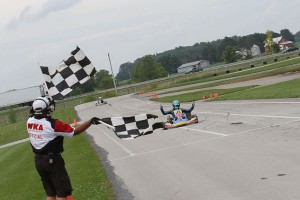 After taking third in the Pro X30 Class earlier in the day, Derek Dignan roared back to life, claiming the $1,000 top prize in the HyTorc of Texas Pro Leopard Senior class. Dignan made it a clean sweep in the class, taking the Streeter Super Stands Fast Time Award, then topping David Galownia, Austin Osborne, Graig Alvarez, and Bryce Englehart for the win. Galownia took hone $500 for his efforts with Osborne getting a set of Bridgestone tires.

With the fourth race of the season in the books, all focus turns to the Top Kart USA Grand Nationals August 28-30 at Pittsburgh International Race Complex in Wampum, Pennsylvania.  Competitors wishing to reserve parking for this event need to contact the WKA Office.