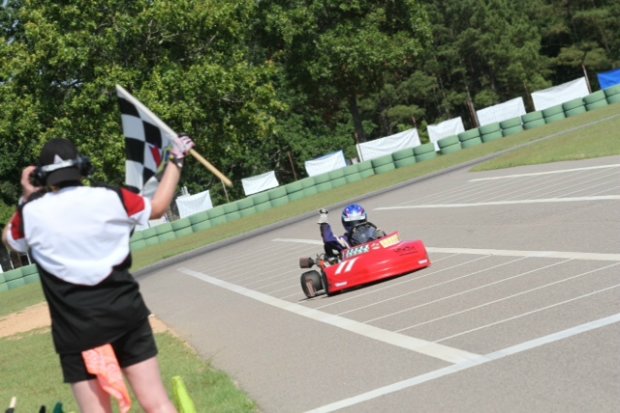 Kalb taking one of his three checkered flags during the Kershaw weekend (Photo: Double Vision Photography)

One of the best kept secrets in karting is the WKA Gold Cup program, which is focused on 4-Cycle sprint racing. The program features a number of American chassis manufacturers and engine builders, powered by Briggs & Stratton powerplants. Engine structure has changed over the years, with the focus now primarily on the Animal engines on gasoline instead of methanol, and the addition of the sealed LO206 engine to help bring in the newer racers into the series. Many shops and businesses have helped to form a great incentive program that has exceeded $170,000 in product, money, and other prizes for the 2015. 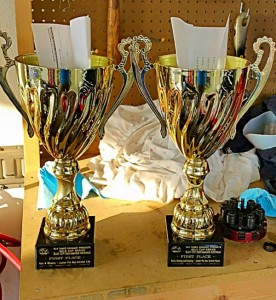 The year began with the opening event at the historic 103rd Street Sports Complex in Jacksonville, Florida on March 27-29. The second stop took competitors to the Kart City Performance Nationals at Carolina Motorsports Park on June 5-7. That is where Ohio driver David Kalb Jr. recorded his best weekend as a Junior driver in the WKA Gold Cup program, earning two regular class victories along with the Friday night money race. Kalb did all his winning while battling illness. David was up all Friday night with the flu, and he skipped Saturday morning practice to save his energy. He battled all weekend long, performing at his best while not feeling anywhere near 100% health-wise.

The Friday Junior Shootout money event began with qualifying, as 14 drivers set their quickest lap in qualifying as Kalb ended up second behind Matthew Tortorell by just 28 thousandths of a second. Kalb was able to get the jump and secured the lead on the opening circuit of the 10-lap event. From there, he led every lap to win the $200 prize for first place.

Momentum carried over into Saturday where Kalb secured two more victories. Up first was the Junior ProGas Animal Lite category. Kalb qualified fifth in the class, and worked his way into the third spot after the Prefinal. David took over the second position early in the 12-lap Final, and moved into the lead by the end of lap two. From there, Kalb stayed consistent with his lap times, pulling away to a 1.2-second advantage at the checkered flag for his first class victory of the season. The Heavy division competed later in the class order, and faired even better for Kalb. Qualifying second, missing out on the fast lap honors by just three hundredths, David led all eight laps of the Prefinal and recorded the quick lap time of the race. Kalb took advantage of the pole position for the Final, leading all 12 laps to secure his second victory of the day, his first in class on the season.

Sunday looked as if it could be a repeat in each category. Kalb qualified better in the Lite category, ending the session in the third position. He fought with Matthew Miller for the lead in the Prefinal, coming away with the win. The two continued their fight into the Final, with Kalb able to hold off Miller to the checkered flag. Officials however removed Kalb from the results for aggressive blocking. Kalb was on his way to victory in the Heavy class, after qualifying second and finishing first in the Prefinal. Leading the main event, Kalb was removed from the track for what is questionably ‘blocking maneuvers’. Still, no one could take away the three win performance by Kalb on the weekend.

Kalb is looking to move up the karting ranks, and is steadily making the transition over to 2-Cycle racing. This past Daytona KartWeek, Kalb was a top-five finisher in the Yamaha Junior division. David is scheduled to compete at the SKUSA SummerNationals next weekend in TaG Junior, and compete at the final United States Pro Kart Series events in Yamaha Junior. 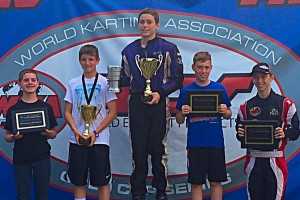 Kalb on top of the podium for one of his three victories at Kershaw (Photo: Kalb Family)

Chassis: Arrow (Junior ProGas Animal) / FA Kart (Yamaha Junior) / Tony Kart (TaG Junior)
Engine/Engine Builder: Turner Racing Engines (Animal) / Comet Racing Engines (Yamaha and IAME)
Sponsors: Track First
Series You Compete In: WKA Gold Cup (Junior ProGas Light/Heavy) / WKA Manufacturers Cup (Yamaha Junior and TaG Junior) / United States Pro Kart Series (Yamaha Junior)
Years Karting: 9
How did you get started in karting? Started at Thompson Kart Raceway in Thompson, OH. Saw booth at Cleveland Autoshow and went to track at 4 years old.  Was not into racing at the time. Decided to buy kid kart and got hooked.
What has been the high point in your racing career? 2013 WKA National Champion Sportsman 2 Heavy / Podium finish at 2014 WKA Daytona KartWeek in Yamaha Junior
What are your goals in racing? Continued success in karting, running Junior classes the next couple of years.  Will be focusing more on TaG Junior in 2016.  Long term potentially race professionally in NASCAR or other racing series.  Most importantly, enjoy the experience and have fun doing something I love to do.
In a few words, how would you describe your driving style? Calculated.  I am often able to win last lap battle by out maneuvering the other drivers.
Funniest moment at the race track? Andrew Bujdoso getting out of his kart and trying to push it across the finish line to win TaG race in Pittsburgh.

What do you do when not at the track? Play sports (basketball, baseball) and video games
What are your goals outside of karting? Earn a college degree and have family someday
What type of street car do you drive? Don’t have license yet, but have been practicing in my dad’s Chrysler J
What type of street car would you like to drive? BMW
What are your pet peeves or things that irritate you? People that say racing isn’t a sport
What do you think could be done to improve the sport of karting? Lower the cost so more people can race.  Better engine rules: more standard and easier to pass tech
What are your favorite aspects about the sport of karting? The intense competition.  The experience of battling the for the lead on the last couple of laps, win or lose.  Also, being able to spend time with my family and friends.