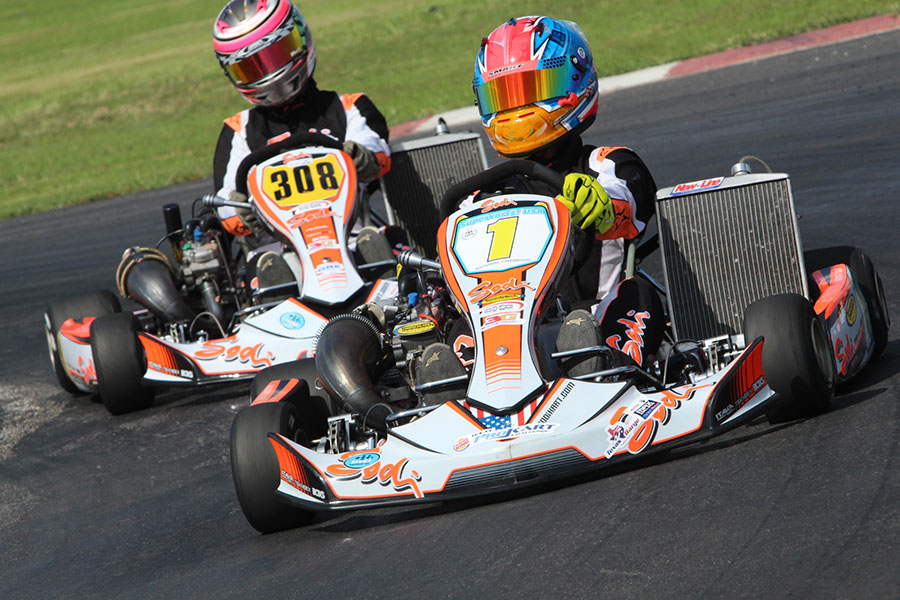 Another step in the championship chases of the 2015 Burger King®/Texas Barge ProKart Challenge series – presented by 3G Kart Racing, Dallas Karting Complex and IAME USA West – was completed over the July 10-12 weekend with Superkarts! USA and Texas Barge Rotax Max Challenge competitors taking part at the Dallas Karting Complex facility in Caddo Mills, Texas. The strong regional traveling program hosted another talented field of drivers, completing the fifth and sixth rounds of the championship schedule to further define those who will have the opportunity to claim the 2015 series titles in October.

The Champion Racing S1/S2 Stock Moto category welcomed new faces to the front of the field. Miguel Lopez made his 2015 series debut, earning fast time in the Saturday qualifying session. Lopez’s time at the front was short-lived, with Senior rookie Trenton Estep taking over the top spot and winning his first heat race. From the pole position, Estep led all 14 laps to secure his first feature victory. Nathan Adds ran runner-up with Jake French climbing up from last to third after issues in the heat race. Chris Jennings and Austin Wilkins completed the top-five. French came back to lead the field in qualifying on Sunday for his third fast time honor of the season. Estep, who started second, edged out the elder French for the opening heat win. French returned the favor in Heat #2, besting Estep in the second eight lap event. Adds joined the fight at the front during the Final, leading the majority of the 14-lap race. On the final circuit, Estep stole the top spot and reached the checkered flag first for his second victory of the weekend. Adds held off French for the runner-up, with Wilkins and Jennings once again in the top-five. 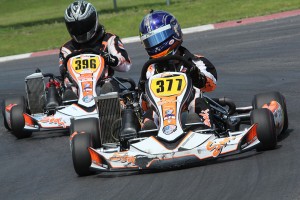 Championship contenders Connor Ford and Thomas Beaudoin split the victories in the Motorsports Development Group Rotax Senior division. Ford set the pace to begin Saturday’s round of action, posting fast lap in qualifying and winning the heat race. At the halfway point of the main event, Ford retired with a mechanical issue. That handed the lead and the victory to Beaudoin for his second of the season. Brett Mitchell and Gabe Bargas completed the podium with Jose Ruiz and Rett Thomas running fourth and fifth. Ford rebounded on Sunday to sweep the day, leading from qualifying, through the two heat races and the feature. Ford drove to a four-second advantage over Beaudoin in the main event, with Bargas once again in third. Mitchell ran to fourth with Thomas in fifth.

Austin Osborne continued his domination in the TaG Senior division, winning both days. Nick Martin has been the lead challenger all season, earning the pole position honors in qualifying after Osborne was penalized two positions for a rear track width violation. That was the only blemish on Osborne’s record for the weekend. He drove to the heat win and then led all 14 laps for his fifth victory of the season. Veteran Jim Russell Jr. ran runner-up in his series debut, with Austin Kaszuba in third. Nick Martin and Dylan Towne completed the top-five. Osborne was perfect on Sunday, leading the entire way. Securing fast time in qualifying, Osborne led all eight laps in the two heat races. Martin got the jump to begin the feature race, only to see Osborne assume the top position on lap two, leading the remainder of the race to keep his perfect feature record on the season. Greg Alvarez pushed Martin back to third with Russell fourth and Kaszuba fifth. 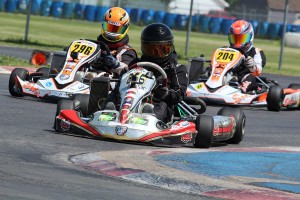 Also continuing his feature win streak to six in the Chase Racing Rotax Junior category was Ryan C. Lewis. Lead challenger Riley Dickinson fought early, securing fast time in qualifying and winning the heat race. Lewis took over the top spot on lap two of the main event, and led the remainder of the race for his fifth victory of the season. Dickinson settled for second with Lawson Nagel completing the podium. Nathan Ratton and Austin Eder rounded out the top-five. The same two went back and forth throughout Sunday. Dickinson edged out Lewis for the fast lap in qualifying. Lewis got the first heat race, with Dickinson coming out the winner in the second heat. Much like Saturday’s main event, Lewis took the lead from Dickinson on lap two, going on to the victory. Dickinson ended up with his second runner-up finish of the season, with Nagel on the podium. Ratton and Brooke Hammond were fourth and fifth.

The Leading Edge of Texas TaG Cadet class welcomed two new winners on the season, bringing the total up to five different drivers in 2015. Enzo Scionti added his name to the list of winners, earning victory on Saturday. The day began with Scionti fourth in qualifying behind three drivers separated by just 45 thousandths, led by Destin Shields with Chase Gardner and Vittorio Catino making his first series start. Scionti emerged as the winner in the opening heat race, holding off Juan Pablo Cepeda at the line. The Final was led mostly by Scionti, with Shields leading a few laps and keeping the pressure on until the checkered flag. Scionti scored the victory by 1.5 seconds over Shields with Gardner in third. Cepeda was fourth with Logan Stretch in fifth. Shields and Scionti appeared to be the top contenders on Sunday, as Shield set the fast time in qualifying and Scionti won both heat races. Catino was right there throughout the day, and it became a three-driver fight in the main event. Scionti and Catino exchanged the lead numerous times with Shields waiting in the wings. Catino took over the point with two laps remaining, and held on to the checkered flag for his first victory. Scionti drove to second with Shields third. Stretch and Alex Stanfield made up the top-five. 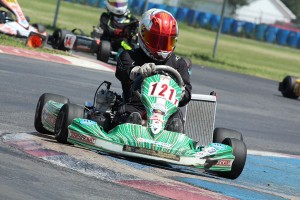 Championship leader Noel Jesus Leon added two wins in the Texas Barge Rotax Micro Max division to his credit following the Dallas weekend. Leon found himself trailing Branyon Tiner to begin Saturday, missing out on the pole position in qualifying by 29 thousandths and the heat race win by 75 thousandths. Tiner led the majority of circuits in the 12-lap main event, with Leon trying to work past for the top position. It finally worked on the last circuit, with Leon able to secure the spot and earn the victory. Juan Pablo Cepeda slipped past Tiner for the second position. Caiden Mitchell and Enzo Scionti completed the top-five. Leon began Sunday on top, posting fast time in qualifying. He would get shuffled back to fourth in the opening heat with Cepeda landing the race win. Tiner reached the checkered flag first in Heat #2, but was penalized one position thus handing the win to Leon. The battle in the feature was between Cepeda and Leon. Cepeda led the majority of the race, before Leon secured the top spot on the final circuit to earn his second victory of the weekend. Cepeda ended up runner-up with Tiner a close third. Scionti and John Burke finished fourth and fifth.

Andrew Engberson got back to winning in the AIM S5 Junior Stock Moto division, sweeping the weekend. Engberson led from qualifying to the final lap both days, beating out Austin Jeffries and Blair Hosie on Saturday with Broch Evans and Jacob Boubel making up the podium on Sunday. TaG Master saw Rick Baribeault double up on the weekend, earning his fourth and fifth victories of the season. Erich Polack broke up the sweep on Saturday with the heat race win, and came out of Sunday’s qualifying with the fast time. Lance Lehrman completed his third straight weekend sweep of 2015 in the Kart Racing Solutions Rotax DD2 Masters class. This time, he was joined by Conard Park and Philip Stoelman on the podium each day. 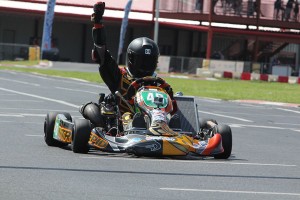 The Texas Barge Rotax Mini Max category was split between Brandon Warwas and Marcelo Garcia. The two were at the top of the order all weekend, with Garcia setting the pace early Saturday with fast time in qualifying and the heat race win. Cash Tiner got the jump on both, and led the first half of the feature race. Warwas took over the point on lap seven, and drove on to his first victory of the season. Garcia crossed the line second, but was removed from the results for carburetor infraction in tech. That promoted Alejandro Jaramillo to second with Tiner in third. Garcia bounced back Sunday to sweep the day. At the end of the day, Garcia drove to a five-second margin of victory in the main event for his third of the season. Warwas and Jaramillo joined him on the podium.

Tyler Orum and Matt Stretch split the victories in the TaG Junior division, each earning their first of the season. Orum swept Saturday’s round, with Stretch and Cooper Heffley completing the podium. Sunday was a sweep from Stretch, as Orum ran runner-up with Heffley in third. Jordon Musser made his 2015 Dallas Karting Complex Rotax DD2 class debut with victory on Saturday. Musser outran David Edwards and Yann Watts for the win. Sunday was Edwards earning his first victory of the season as Watts ran second with Musser in the third position. Juan David Gomez and Rod Clinard split the top step of the podium in the SwedeTech Racing Engines S4 Master Stock Moto division. Gomez took the victory, his first of the season, on Saturday, with Clinard adding a second victory for 2015 on Sunday. 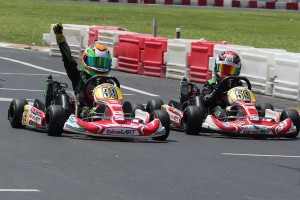 The series will take time off to let SKUSA racers take part in the upcoming SummerNationals in Indiana next weekend, while Rotax competitors are gearing up for the US Rotax Grand Nationals in South Carolina the first weekend of August. The Texas ProKart Challenge returns to action on October 2-4 at the challenging Oklahoma Motorsports Complex in Norman, Oklahoma. Updates on registration and other information regarding the 2015 Burger King®/Texas Barge ProKart Challenge series – presented by 3G Kart Racing, Dallas Karting Complex and IAME USA West is available at texasprokartchallenge.com and on Facebook.