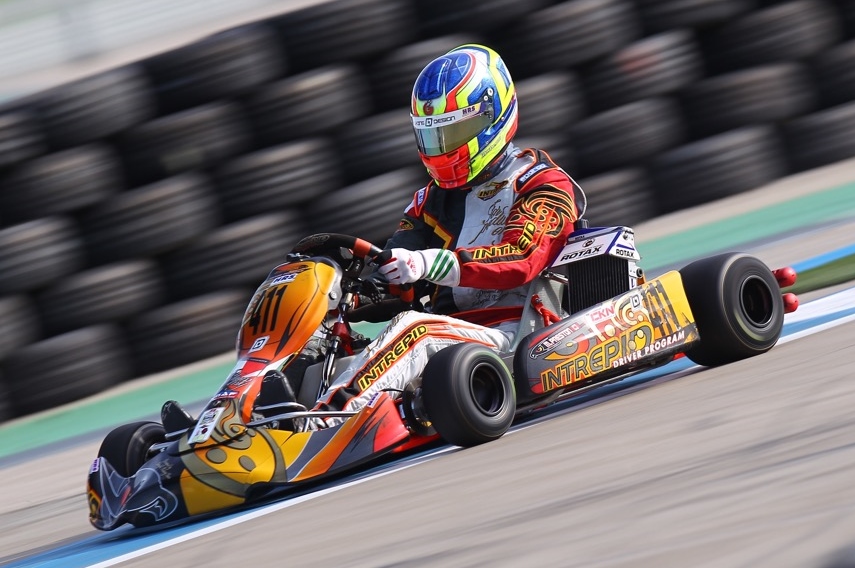 Max Preston has had three consecutive runs to P2 for Intrepid in DD2
(Photo: Goodwood Kartways)

With the Canadian summer now reaching its stride the team at Goodwood Kartways is definitely in full swing. The Canadian Rookie Karting Championship schedules are racing through week four, the TRAK Club Championship has hit its halfway point, and the Goodwood/Intrepid race team is getting set to race into the second half of its National schedule next week at Mosport Kartways. It’s been full out since the turn of the calendar, but that’s just the way they like it.

“For sure it’s been our busiest season ever, but we wouldn’t want to have it any other way,” said Goodwood Kartways president Daniel Di Leo. “Our entire staff is extremely motivated to get the job done right, whether they’re working toward a small private event or the Canadian Nationals. Everyone just seems to enjoy the challenge of welcoming and supporting karters and their families in so many different ways. It’s just been great. We’ve really got a great season coming together and we’re excited about the challenges ahead.”

That great season has been evident on the track as well, as after Goodwood/Intrepid scored three wins and nine podiums at the opening Eastern Canadian Karting Championship event, a team of seventeen drivers travelled to the second round at Circuit ICAR and produced fourteen more top-five results. Four drivers found their way to the podium, with Xavier Harris and Dave Anderson on the blocks in Mini-Max and Briggs Masters for the second straight event and Marco Di Leo and Max Preston also repeating podium trips with Di Leo going 3-3 in Rotax Senior and Preston posting 2-2 in DD2.

“The ICAR weekend went exceptionally well,” Preston said following the event. “The atmosphere under the tent was lively, and the whole attitude of the team really aided in us performing well over the weekend. Of course there is always room for improvement as we are still chasing that first DD2 win, but double 2nd for us is certainly something to be proud of, and a great motivator for the coming race weekends.”

Adding ICAR results to his opening rounds at Goodwood, Preston has crossed second in three consecutive races, and in the latest start posted the fastest lap in the field as well. The consistency and results are just rewards, as the DD2 veteran says he made a conscious effort to change his approach during the lead-up to the 2015 campaign.

“Over the winter I really changed my attitude about approaching a race weekend,” Preston said between ECKC events. “I discovered that simply enjoying the aspect of driving, rather than only finding joy in winning, allowed me to approach an event with an entirely different mindset. I started to really think about what I enjoy most about the sport and why I’ve stayed in it for so long. Then I performed well at Ocala during the FWT and the results have been getting better and better ever since. Of course big thanks to all of the Goodwood Kartways team for their support as well, along with Nigel Horner of HRS Engines and my father Mike for turning the wrenches. Achieving that first win is the next on the horizon, and we know we have the speed to accomplish it!”

With ECKC Event 3 back in Ontario at Mosport Kartways, the Goodwood/Intrepid lineup will be back at full strength. And with the event also serving as a preview to the 2015 Canadian National Karting Championships, all classes are sure to be hotly contested throughout the fields. Di Leo leads the Rotax Senior championship heading in, Anderson has the point lead in Briggs Masters, Preston is P3 in the DD2 title hunt and John Cariati is P3 in DD2 Masters. Full Goodwood/Intrepid results from ECKC Races 3 and 4 can be seen below.

The Eastern Canadian Karting Championship resumes next weekend, July 18/19, at Mosport Kartways. For more information on Goodwood/Intrepid and to learn how the team can assist you there, please email marco@goodwoodkartways.com, visit the new goodwoodkartways.com and like it on Facebook.