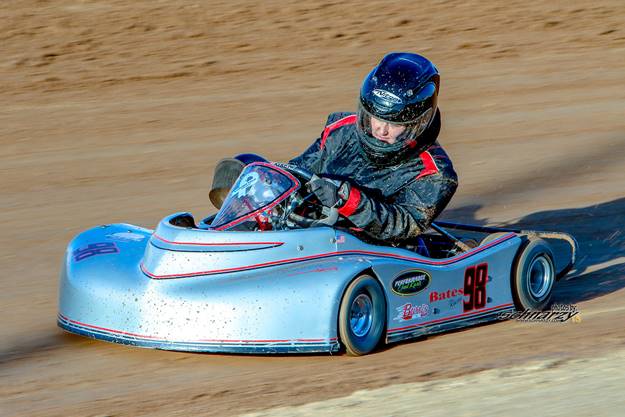 Desiree Gaynor of Long Beach on her way to a fourth place finish in the SR 4 Cycle class
(Photo: Schnarzy)

(Camarillo, CA, July 9, 2015)  The So Cal Oval Karters spent July 4th racing at John Aden’s Wheel2Wheel Raceway on the San Bernardino County Fairgrounds in Victorville and produced three 2015 repeat winners before a fine holiday crowd that was also treated to a giant fireworks show on the grounds.

Mother Nature graced the day with a reprieve from the devastating high temperatures that prevailed in California just a few days earlier.  None the less, the SCOK race turned on the heat and put on a sensational show on the 1/8 of a mile banked dirt oval.

In the SR 4 Cycle Class it was business as usual for Bonita karter Matt Martis as he won his fourth main in six races in 2014.  Starting from the pole, Martis, who also won one of the heat races, beat Lake Elsinore’s Jason Voss to the checkered flag in the main event.  Following Voss, who is the only other driver other than Martis to win in the class in 2015 and he has done it twice, was Garrett Schill of Riverside, Banning’s Desiree Gaynor and Aubry Oppelt, who like Voss, resides in Lake Elsinore.

Desiree Gaynor of Long Beach on her way to a fourth place finish in the SR 4 Cycle Class.  Please give photo credit to Schnarzy.

In the KT 100’s, Rob Marion made the long drive from Oxnard a worthwhile venture by sweeping the show winning both heats and the main event.  Like Martis, Marion won the main event from the pole.  It was his third straight win in the class dating back to May 30th.  Cherry Valley racer Troy Patton, who won the first race of the year at Wheel2Wheel in April, came from a fourth place starting spot to finish second in the main event.  The top five finishers were rounded out by San Diego’s Randy Truax, Rev Parker and Lake Forest college student Mitchell Collins.

Like Marion, La Verne veteran Jason Morheisr swept the show winning both heats and the main in the F200’s.   It was his second trophy of the 2015 season and both of the wins have come at Wheel2Wheel.  Morheiser outdistanced Lake Elsinore’s Troy McIntosh and Banning’s Scott Gaynor for the victory.

Rounding out Saturday’s show was the Open Class and Steve Patton, who also captured both heat races, won the 20-lap main event from the pole.  Chasing the Cherry Valley racer to the checkers was Lakeside’s Chad Griggs, Camarillo’s Cody Nigh and San Marcos karter Norm Reynolds.

Up next for the So Cal Oval Karters will be round #2 of the “Summer Shootout Series” at the beautiful Grand at the Industry Hills Expo Center on July 25.  It will be the only time that the club races with a roof above them in 2015.  The pit gate will open at 9:00 AM with the first race at noon.

The So Cal Oval Karters would like to thank the following sponsors who help make the series possible.  Burris Racing, Cory Kruseman Sprint Car Driving School, Hubcapmike.com, Perris Auto Speedway, Professional Announcer Chappy, R&J Motorsports, THC Home Medical Services, T-MAC Racing and Yoa Racing Engines.  If you would like to become a part of the So Cal Oval Karters 2015 season, please call or E-mail Mike Nigh at (805) 857-2595 or mailto:scokart@gmail.com.