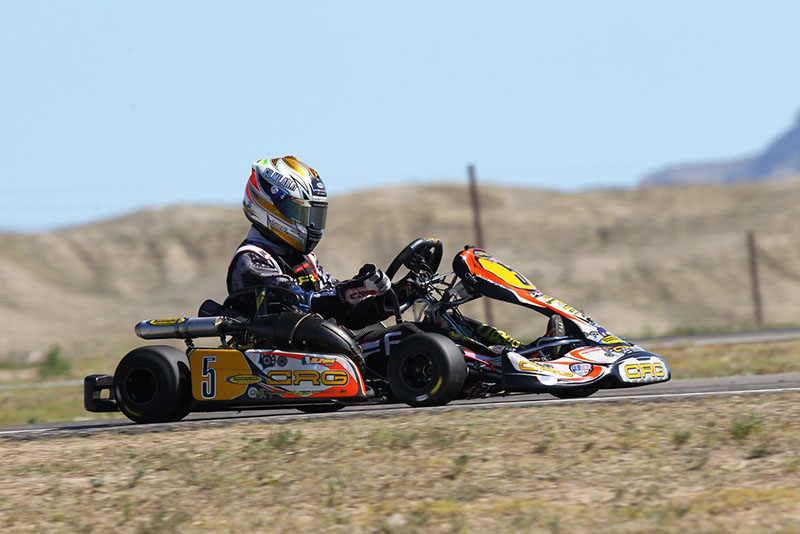 July 7, 2015 – It was another winning weekend for CRG USA at the second round of the Cold Stone US Open, this time at the Grand Junction Motor Speedway in Grand Junction, Colorado. With a large contingent of drivers, a pair would emerge victorious as Davide Forè made a last lap pass to take the top step of the podium in Elite Shifter while Darren Elliott swept every on track session in Stock Honda Veteran. With one event remaining, several CRG USA drivers will have a shot at the inaugural US Open Championships as the series concludes in October at the Rio All-Suite Hotel and Casino in Las Vegas, Nevada.

“It was a tremendous weekend for CRG USA and the CRG product line,” explained Stacey Cook, Owner of both the Grand Junction Motor Speedway and CRG USA. “It seemed as if we had a shot at victory in nearly every class we competed in. A special thank you to all CRG USA drivers for the hard work and perseverance in over the top temperatures.”

Leading the way in the Elite Shifter class, five-time world champion Davide Forè made an incredible last lap pass on fellow European standout Jordan Lennox-Lamb to take the victory and the overall series point lead heading to the final round. Sabré Cook would be out dueled by fellow CRG USA driver Joey Wimsett for the third and final step on the podium. With all three CRG USA drivers excited for Vegas, the trio will enter the event with title hopes hanging in the balance.

In the Stock Honda Veteran class, perennial CRG pilot and frontrunner Darren Elliott swept the weekend with impressive driveseach and every time he hit the circuit. Taking the pole position, four heat race wins and main event victory, Elliott now sits third in the title chase and will look for a repeat performance in Sin City. Fellow CRG USA stable mate Juan Garcia crossed the line in fourth in Sunday’s main event while Mexican drivers Alvaro Pelaez and Emilio Quiroga put four CRGs in the top-six as they finished fifth and sixth respectively. Garcia sits just ahead of Elliott in the series point standings, as all four drivers will fight for podium results at the final event.

Stock Honda Master point leader Jet Davis entered round two riding a high from his victorious weekend in Dallas. Carrying the momentum forward, Davis swept all the heat races to extend his national points lead. Falling to the tail of the field at the start of Sunday’s main event, Davis drove from last to a podium result, coming up one kart short finishing in second. CRG USA teammate Hugh Templeman added another podium result for the Colorado based team with a third place effort as he continues to improve week in and week out. Davis will head to the final round in control of the championship points battle while Templeman will keep him honest sitting only a few points back in second.

Colby Yardley was one of the favorites in the Shifter Senior division entering the second round of the US Open and was poised to take the victory on Sunday. Running second and battling hard for the lead, Yardley made a bid for the top spot but contact ensued and Yardley was forced to retire from the event. With the DNF result, Yardley falls to fourth in the championship point standings but has an outside shot at the overall series title. CRG USA would also enter Hannah Williams, Connor Thomas and Ryan Lankenau in the Shifter Senior class as the trio finished seventh, eighth and twelfth respectively.

In the Rotax powered classes, CRG USA would enter Billy Cleavlin in the Masters division as he continued his front of the field performances. Progressing nicely through the heat races, Cleavlin impressed all with a fourth place finish in the main event. Becoming more and more comfortable with the Rotax package each and every weekend, Cleavlin is poised for the top step of the podium in the very near future. In the Rotax DD2 Masters class, Ben Johnston added another podium result for the Colorado based CRG team with a second place effort.

Carlos Gonzalez and Mateo Diaz continue to make progress in the Rotax Senior field. Competing against a host of champions from around the world, the duo is improving and gaining experience each and every race weekend. Gonzalez would close his weekend with a thirteenth place effort while Diaz would finish right behind in fourteenth.

Lasse Gaxiola would try his hand in the Rotax Micro Max class as he entered his first ever event since advancing from the Kid Kart ranks. Getting use to the increased speed as well as the high caliber of the national competitors, Gaxiola ran as high as sixteenth in the main event before contact sent him off the racing surface.

Cook continued, “Lasse showed everyone something this weekend. Wednesday was his first day in a Rotax and less than two days later he was qualifying and running wheel-to-wheel with some of the country’s best Micro Max drivers. He showed great speed and was learning every session. With some seat time, he will be a front-runner in no time.”