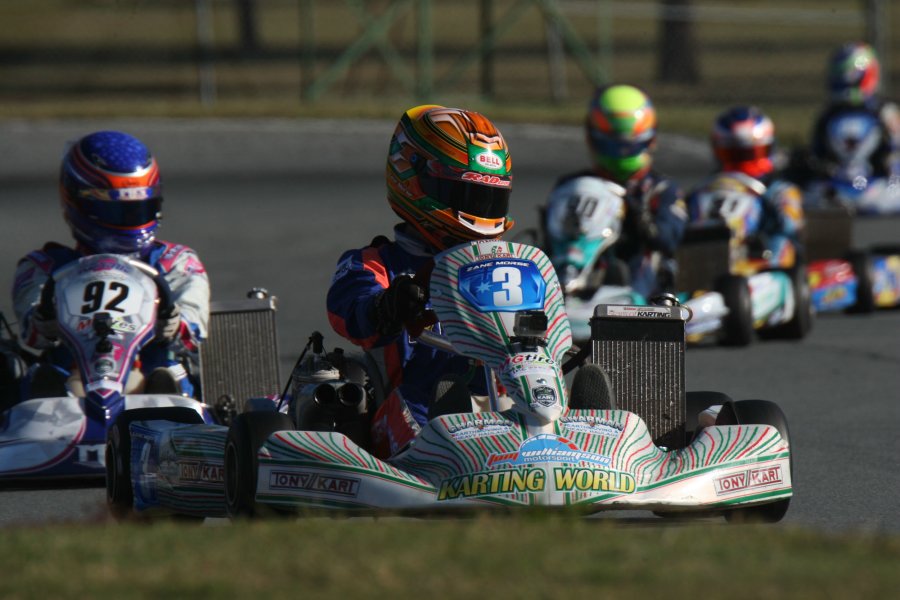 Zane Morse returned to the top step of the podum in KF3
(Pic: Coopers Photography)

Watch all of the action on demand on karting.net.au

Canberra racer Zane Morse has got his KF3 Australian Kart Championship presented by Jayco and Castrol EDGE back on track after a brilliant victory in round three in Ipswich on Sunday.

The Tom Williamson Motorsport youngster who has been experiencing a litany of issues with his Tony Kart and engine package over recent times carded a clean-sweep of the weekend in the hard fought final. 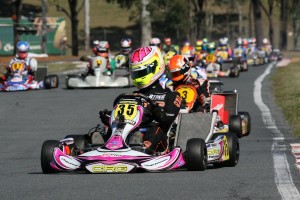 A group of four karts were at the front for much of the race, with the tense battle going to the wire. Round two winner, Reece Sidebottom staked his claim for Championship glory coming home in second and move into the points lead.  Sidebottom’s fellow Victorian Thomas Hughes secured his second straight podium finish with a third placing and Aaron Cameron completed the top four – the Victorian Arrow driver at one point overshooting the final turn and spearing through the grass.

KZ2 saw Jason Pringle make a welcome return to the top step of the podium. It was a bittersweet victory for Team CRG after young New South Welshman, Jaie Robson had an engine failure at turn one with just three laps left remaining. He was holding a 0.7s lead over Pringle and Championship leader, Jake Klarich.

Klarich, who won the first two rounds, cemented his Championship lead through his second placed finish, whilst completing the podium was former Australian Champion, Chris Hays in his Energy Corse Australia entry.

KF2 swung the way of local driver, Scott Sorensen. It was the second $1000 winner’s cheque in succession presented to the Harrington Doyle Racing Arrow Karts driver. It has boosted his confidence for the remainder of the Title tilt. He took a dominant win over Holden Kart Team JC Kart driver, Liam McLellan and in third place for Chelgrave was Josh Davey on Championship debut.

The battle for third raged between Josh Tynan, Luke Flynn and Davey for much of the race, however with a handful of laps to go, Tynan and Flynn collided at the hairpin which saw Flynn flip out of the race. 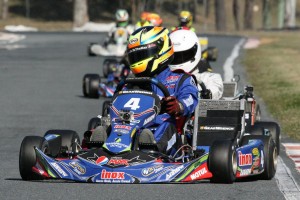 KA Junior fell the way of Victorian Monaco driver, Jordan Caruso. Harrington Doyle Racing’s Declan Fraser took the chequered flag first, however post-race, officials deemed that a collision with Jack Doohan to take the lead was avoidable and handed Fraser a 10 second penalty. This dropped him to third behind Doohan – who extended his Championship lead.

In X30, Daniel Rochford took a hard fought victory in his Monaco chassis ahead local Arrow driver Ben Stewart to claim the Queensland Championship in the process. Stewart, who heads to the United States next Friday for two major events, shadowed Rochford for the majority of the affair before one small mistake slightly dropping a wheel into the dirt cost him momentum and allowed Rochford to pull away.

Sydney-sider Pierce Lehane took his Redspeed chassis to third after finishing second in each of the heats. Championship leader, BirelART Australia’s Bradley Jenner ended his unbeaten streak in the final crossing the line fourth and securing valuable Championship points.

KA TaG produced some of the best racing of the weekend throughout the heats and local BirelART RK Kart driver, Nicholas Andrews had the perfect weekend, winning every race in comfortable fashion. He took an easy victory in the end over Kaos Karting Arrow pilot, Brendan Nelson. Nelson, who was hoping to use this weekend on home soil to close the gap to points leader Adam Lindstrom, did that, but only by the barest of margins in the final with Lindstrom coming home in third position.

The KA12 fight is poised to be one of the most closely watched Championships as the November 1 final round in Geelong approaches.

Thomas Cooper got the best of the field in that category after a spirited battle with Oscar Comley and Championship leader Jay Hanson.

When going for the lead on Hanson, Cooper was able to get through, however Hanson drifted wide and dropped to fourth position.

Comley – a newcomer to the category, finished second with Webster third.

The James Sera domination of KA1 came to an end this afternoon with Toby Pope getting up for a surprise victory. Pope and fellow Championship aspirant Justin Francis kept the multiple Australian Champion honest for much of the weekend. It was Francis who pounced early on Sera in the final, only to have Pope go with him. 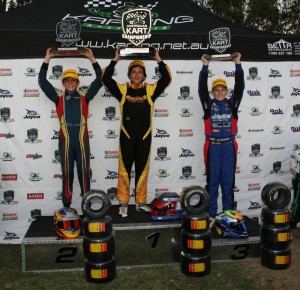 Following on from that, Pope slipped past Francis, in the end taking an easy victory and claim the Queensland Championship in the process. Sera held on for third over fourth placed Matthew McLean.

The Australian Kart Championships presented by Jayco and Castrol EDGE go into a two month hiatus before returning to Newcastle (NSW) over the weekend of September 4-6.

AUSTRALIAN KART CHAMPIONSHIP
Points Standings After Round 3 of 5 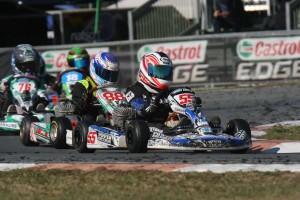 Thomas Cooper got the best of the field in KA12
(Pic: Coopers Photography) 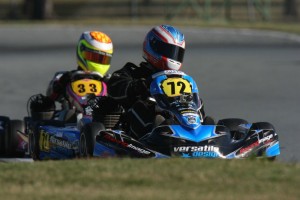