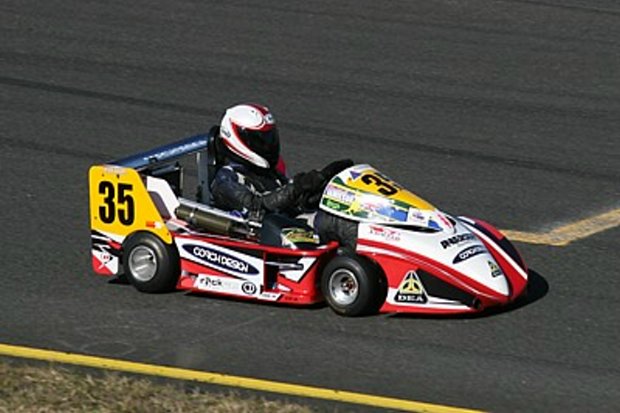 Russell Jamieson and two first time winners, Jordan Ford and Mark Robin have claimed the spoils after the first race of the Rockpress/Coach Design Australian Superkart Championships. Thrilling battles filled the race with Jamieson (Coach Design Anderson-DEA) taking the race lead just 50 metres ahead of the finish line, clawing his way past Warren McIlveen (Stockman Superkarts/Mac’s Marine Stockman-VM) in the shadow of the chequered flag after a race long five-kart fight.

Gary Pegoraro (Dunlop Kartsport/BRC Engines Anderson-BRC) led initially, making a superb start from grid four while Jamieson bogged down. McIlveen helf second until overtaken by a very fast starting Anton Stevens (Ciscos/Art Motorsport/KPI PVP-FPE). A lap later Stevens led with Pegoraro dropping to fourth behind the recovering Jamieson while Ilya Harpas (Your Amigo Anderson-DEA) held station in fifth. McIlveen dived underneath Stevens at turn 8 on lap five and held off the field until the end of the race where Jamieson who had slowly worked his way through the field to lead only the final few seconds of the race, out-dragging McIlveen to the line to take the win.

“Loaded up at the start,” said Jamieson. “Got swamped by the pack. The kart still felt loose, we’ve still got work to do, it was sheer luck we got the win. I didn’t know it was the last lap, we didn’t get a last lap board.”

“The kart is great around the back, the handling is really good,” said McIlveen. “It just suffers a little on the straights. Towards the end it started to misfire between gears and that slowed me a little out of the final corner.”

Lapping a backmarker with two laps to go saw the third place battle fall behind the two leaders but it took until just three corners remained before Pegoraro was able to pounce upon the slowing Stevens and snatch third. Harpas had a grandstand view to the fight, fifth all race but unable to attack the four in front.

“That was the plan to get them in the last laps,” said Pegoraro. “I was hoping to get three instead of one. You’ve got to finish four races at these events. That was as good as we could get.”

Kristian Stebbing (KJB Accountants & Business Advisors Anderson-DEA) was sixth his pace not quite there to fight with the leaders. Jason Smith (TecHome.com.au/Middletons Printing Anderson-DEA) was next, his misfire cured but three seconds off the pace. Martin Latta (MJR Bricklaying/Slipstream Signs Anderson-DEA) was eighth, overtaking his 250 National class team mate Jordan Ford (Peter Ford Catering/Burbank Homes Anderson-Yamaha) in the run to the chequer.

Ford utterly dominated the 250 National class, leaving the 250 National lap record in tatters. Ford ran three seconds a lap faster than the field for the duration, only backing off late in the race. The fight for second was intense with Aaron Cogger (Avoig Superkarts/Rat Pack Racing Avoig-KTM) falling just two thousandths of a second short of overtaking Dan Lewis (Lewis Plumbing Anderson-Gas Gas). Cogger had been following Lewis closely for a couple of laps, analysing where he might attack the Queenslander and concentrated on getting a great exit from the final turn only to have Lewis’ Anderson break loose mid-corner. Cogger feathered and by the time to two straightened they were even charging to the line. Only the timing computer could seperate them. Dale Williams (Slipstream Signs/Burbank Homes Anderson-Yamaha) was fourth, just three-tenths ahead of Tim Weier (Zahl 1 Karting/Laser Central Anderson-Gas Gas) at the line. V8 Touring Car Series winner Justin Ruggier failed to finish as he used the race to run in a new KTM engine after his qualifying difficulties in the Anydoor and Gates Anderson-KTM.

“I got very nervous at the end,” said Ford. “We had electrical issues and the data screen was showing all kinds of things. I started short shifting and rolled off at the end.”

125 National was another thrilling battle with Mark Robin (Colourite Painting Stockman-TM) taking the win from Paul Campbell (Redback Racepaint ACT Avoig-Honda) after a race long fight. Jeff Reed (Stockman Superkarts Stockman-Honda) broke his own lap record chasing them down after a poor start. Tim Philp (Floth Sustainable Building Consultants Avoig-Honda) faded to fourth after running with the leaders. A sticking o-ring robbed him of pace down the straight. Tony Lappas finished fifth (Wizzer Engines SKE-BRC) but not without controversy. The South Australian was involved in a collision with Phil Silcock (Rockpress Avoig-Honda) in a scrambled start amongst the 125 National class, putting Silcock out of the race before he could cross the line to start it.

“That was good fun,” said Robin. “We didn’t go as quick as we did in qualifying, I’m not sure why. It was just a great fight with Paul.”

“I could tell Reedy was coming,” said Campbell. “I kept turning to look. He was twenty metres, then ten, then five.”

The Rockpress/Coach Design Australian Superkart Championship continues tomorrow with three races to be decided. Race 2 begins the Sunday race program at the Shannons Australian Motor Racing Nationals at 9:15am. Races 3 and 4 follow at 12:45pm and 3:20pm. You can catch all the racing action on Shannons Nationals TV live streaming at:
http://livestream.com/accounts/1658248/events/4169607/player?width=640&height=360&autoPlay=true&mute=false