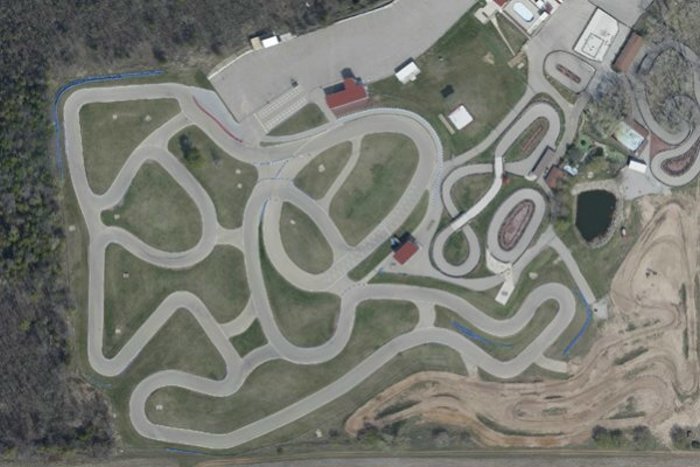 Story provided by Scott Williams of The Shawano Leader

An out-of-state buyer Wednesday purchased the US Air Motorsports Raceway at auction for $345,000 — a price lower than many observers had expected.

The successful bidder was not immediately identified, although auctioneers described the buyer as a racing industry insider who operates racetracks elsewhere.

The sale is not expected to affect any upcoming events at the Shawano County attraction known for go-kart races, motorcycle races and similar events.

Scott King, executive vice president of J.P. King Auction Co., said the purchase price was lower than anticipated, possibly because the racetrack’s rural location puts it somewhat off the circuit of other major motorsports facilities.

The 40-acre attraction in the town of Wescott sold for $2 million three years ago following a foreclosure.

The current owners, Green Mountain Finance Fund LLC of Norwalk, Conn., paid $700,000 for the property about six months ago, according to county land records. The owners decided to take the highest bidder at auction after trying unsuccessfully for a conventional sale.

The auction conducted Wednesday in the racetrack’s banquet room attracted three bidders, although the winning bidder participated via telephone from Colorado.

The sale includes not only an asphalt track with more than a mile of twists and turns, but also an amusement park, a miniature golf course, about 30 go-karts, a picnic area, concessions and several other buildings. Since opening 10 years ago, the complex at W5901 County Road BE has become a national attraction for racing competitors and fans.

Aaron Carmody, a business owner from Door County, was the second-highest bidder at $340,000.

Carmody said he planned a partnership with a friend who is active in motorsports, to operate the racetrack and possibly expand the amusement park while boosting event promotions.

Carmody, however, said he stopped bidding at $340,000 because of uncertainty about the operation’s finances.

“It’s going to take someone with some vision,” he said.

Another bidder, Al Burnett, said he represented a Chicago investment group with racetracks in Illinois, Arizona and Nevada. Burnett said his group would likely bulldoze the amusement park to expand parking for spectators attending the racing events.

The rural location in the Shawano County countryside offers the sort of fresh air and atmosphere that motorsports fans enjoy, Burnett said.

“I like the track,” he added. “There’s potential here.”

Burnett ultimately offered no bid on the property, and the auction came down to Carmody and the out-of-town suitor on the telephone. With bids starting at $250,000, the competition ended about 30 minutes later when Carmody opted not to top his competitor’s final offer of $345,000.

Some racing fans watched the auction with anticipation, hoping that the new owners would continue the racing events held there.

“It’s a great place,” said Bob Holzmann, whose son has competed in events there.

Mike Moderson, who lives nearby in Wescott, said he thought the auction would have attracted offers of $500,000 or more. Moderson said he appreciates having the attraction in the neighborhood and he, too, wants to see it continue.

“If it brings people into the community, that’s great,” he said.

King said the sale should be completed within about 30 days. Although the owners had hoped for a higher sale price, he said, their primary objective with the auction was finding a buyer.

“I think they’ll be satisfied,” he said. “It accomplished their goals.”

eKartingNews.com is working with the auction company J.P. King to find out the names of the buyer or buyers, hoping information can be made available after the holiday weekend.