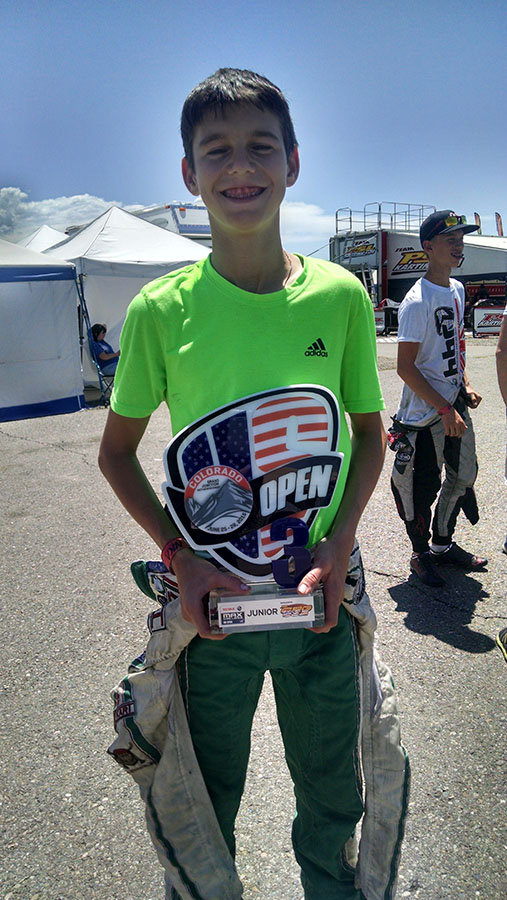 What a weekend for Michael d’Orlando, in Grand Junction, CO, for round two of the Rotax US OPEN series. This was the first time Michael raced at Grand Junction and he was one of the fastest drivers while earning the unofficial “hard charger” title (compliments of kart360.com) for passing the most karts all weekend.

Michael’s weekend kicked off on Friday with an impressive fourth place qualifying position, followed up by a seventh place finish in heat one.  Saturday’s racing would test Michael’s perseverance and he passed with flying colors.  After starting in the seventh slot for heat two, contact early sent him down the order to finish 23rd.  Then starting 23rd in heat three, Lady Luck would again be against him when Michael’s charge through the field ended abruptly after he dropped the chain while making his way up to the seventh spot on lap eight.  Maintaining poise and focus, he would start heat four in 27th but would put on a passing clinic moving up 23 spots to a fourth place finish.

Michael started his No. 251 KoeneUSA prepared Tony/Kart in 15th for Sunday’s final, based on the points tally through qualifying and heats. He would once again put on a show passing 13 karts to cross the checkered flag in fifth place. After post-race penalties were awarded and technical inspections were completed, the second & third place finishers were removed from their results and Michael would end the weekend with a promotion to a well-deserved third place finish.

“The final race went well”, said Michael. “I made a little mistake and went off-roading and lost a couple of positions early in the race, but I worked my way back up the field. I had a great kart and I feel that without that mistake I would have finished even better.  This weekend was a great learning experience for me.  This track was very new to me so I had to learn it quickly, and the competition level makes it even harder. I was happy to leave Grand Junction with third and to finish this weekend strong.”

DRC would like to give special thanks to their team at KoeneUSA (www.teamkoeneusa.com), including Mike Maurini, Martijn Koene, Jesse Dunham and DRC’s Adam Johnson for their continued hard work, support and dedication.  And thanks to the support of their sponsors at adidas Motorsport (www.adidasmotorsport.com), Kool Nerd Clothing (www.koolnerdclothing.com), Focused Project Management (www.focusedpm.net) and Iona Preparatory School (www.ionaprep.org).