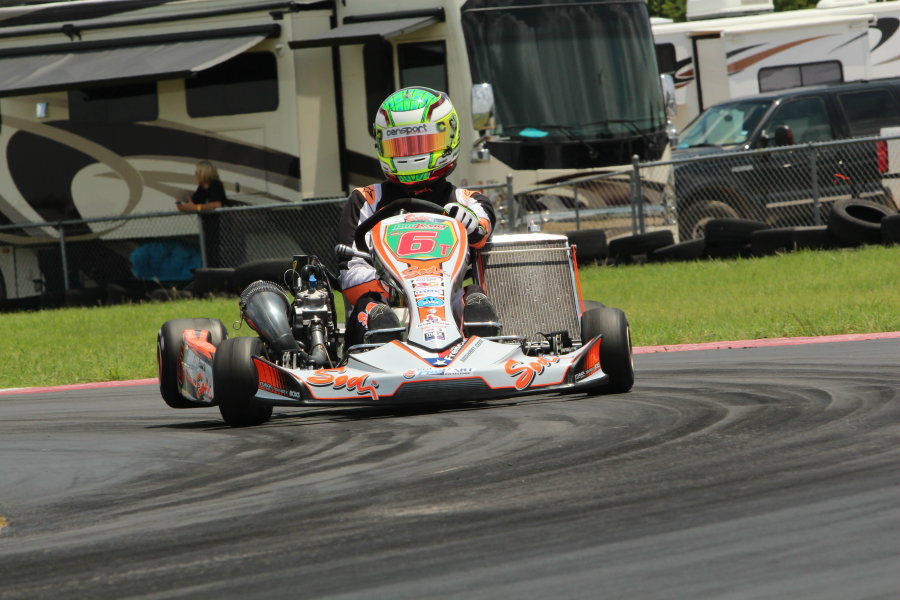 The 2015 Burger King®/Texas Barge ProKart Challenge series – presented by 3G Kart Racing, Dallas Karting Complex and IAME USA West – held its second event of the season at the North Texas Kartway on June 12-14. The Denton, Texas facility is among the most challenging courses in the United States, and the 1/2-mile circuit kept drivers and mechanics on their toes all weekend. The Superkarts! USA and Texas Barge Rotax Max Challenge competitors contested the event during the daylight hours for the first time in series history after night-time main events were held in the three previous seasons. The championship chases are more defined now at the halfway point of the season, with a handful of drivers placing themselves into contention

Jordan Musser and Jake French dominated the opening event in Champion Racing S1/S2 Stock Moto, and continued in Denton. French was the driver to beat throughout the third round action. Qualifying first, French drove to the win in each of the heat races. Musser got the jump on French, who fell back to seventh in the opening circuit. The S1 driver fought his way forward to reach the second spot by lap nine. From there, he inched his way closer to Musser, coming up a half-second short with the former S4 Pro Tour champion taking his second victory of the year. Cody Jolly grabbed the third step on the podium with Nathan Adds and Austin Wilkins making up the top-five. French earned maximum points on Sunday with a sweep from qualifying to the main event. Leading all 16 laps, French won by 3.5 seconds over Wilkins with Adds in third. Musser suffered mechanical issues in the heat races, having to come from the back in the Final and reached fourth, just missing out on the podium by inches at the line. Harry Gottsacker filled out the top-five drivers. 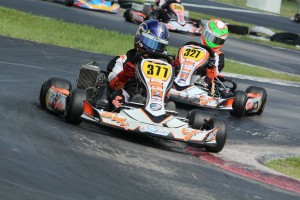 Connor Ford nearly completed the weekend sweep in Motorsports Development Group Rotax Senior division. Ford’s only blemish on the results was qualifying on Sunday. Saturday was a sweep, as he set the fast lap in qualifying and won both heat races. Thomas Beaudoin was able to reach the checkered flag first in the main event, but was moved back to the second position, handing the win to Ford. Spencer DeLeon ran to the third position. Sunday began with two-time race winner Gabe Bargas laying down the fast lap in qualifying. Ford came back in the heat races to score the wins, and then won the feature by over a second ahead of Beaudoin with DeLeon once again in third.

Logan Stretch made his 2015 debut in the Leading Edge of Texas TaG Cadet class that welcomed 15 drivers, nearly pulling off the weekend sweep. Stretch saw his perfect score disrupted in Saturday’s Heat #2 after qualifying on pole position and winning Heat #1. Crossing the line first, Stretch was penalized one position for an infraction. The Final was not decided until the final circuit, with Juan Pablo Cepeda challenging. Stretch took the lead on the last lap, holding on for the victory by just a tenth of a second over Cepeda. Heat #2 winner Enzo Scionti took the final step on the podium with Liam Flanagan and Chase Gardner completing the top-five. Stretch led the way to the main event, qualifying first and winning both heat races. Scionti challenged early on in the Final, until Stretch secured the point and pulled out to a 2.7-second advantage at the checkered flag. Scionti held off Dylan Hajicek for third with Alex Standfield fourth and Flanagan fifth. 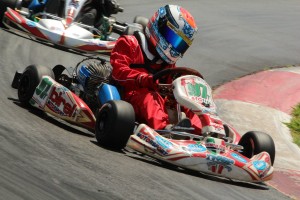 A number of drivers were in the hunt in the Texas Barge Rotax Micro Max division, featuring Noel Jesus Leon and Enzo Scionti taking the victories. Vittorio Catino set the pace in qualifying on Saturday, but Branyon Tiner took the opening heat win. Caiden Mitchell was the third different driver to land at the top, winning the second heat race. Mitchell led all 12 laps to cross the line first, but was penalized one position for an infraction. That promoted Noel Jesus Leon to the top of the podium, dropping Mitchell to the second step as Branyon Tiner ended up third. Scionti started Sunday as the top driver in qualifying, with again the heat races going to two different drivers, Tiner and Leon. Tiner and Scionti emerged as the lead duo, with Scionti able to edge out Tiner at the line to earn his first victory of the season. Leon drove to third, with Catino and Mitchell making up the top-five.

It is now four straight for Austin Osborne in the TaG Senior division after sweeping the entire weekend in Denton. Osborne led from qualifying to the checkered flag of the Final each day, earning maximum points toward the championship chase. Nick Martin ran second on Saturday with Graig Alvarez third in his 2015 series debut. Osborne ran away with the action on Sunday, pulling out to a five-second advantage in the 16-lap feature over Austin Kazuba. Alvarez was a close third with Martin placing fourth. 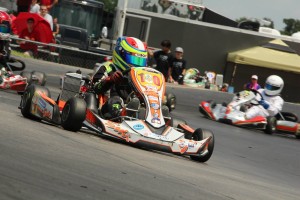 Alejandro Jaramillo controlled the weekend in the Texas Barge Rotax Mini Max category, winning both feature races. Jaramillo landed his first pole position of the season, and won the opening heat race on Saturday. Double Katy winner Marcelo Garcia slipped by for the win in Heat #2, but Jaramillo responded in the main event. Garcis retired early, opening the door for Jaramillo to score the victory. Maxwell Waithman and Cash Tiner completed the podium. Garcia came back Sunday to steal the pole position in qualifying, with Waithman off by just 34 thousandths. Jaramillo was back in fourth, but fought his way to the front in Heat #1. He defended the top spot in Heat #2, and fought off a late challenge from Garcia for his second victory of the weekend. Waithman recorded another podium finish, this time in third over Tiner.

The AIM S5 Junior Stock Moto division welcomed two new winners – Ryan Patrick Lewis and Jake Bien – each making their first 2015 series start. Point leader Andrew Engberson led the way for much of the day with Ryan Patrick Lewis tailing him. In the final. Lewis made a last lap pass work, reaching the checkered flag first. Engberson settled for second with Broch Evans third for his first podium finish of 2015. Sunday was very similar, as Engberson was the driver to beat. Qualifying first, he won both heat races to land the pole position for the main event. Lewis trailed the Round Two winner throughout the day. On the final circuit, contact was made between the two with Lewis getting the brunt of it, and unable to continue. Engberson went on to cross the line first, but was scored behind Lewis. That promoted Bien to the top of the podium, with Austin Jeffries into second and Evans third. 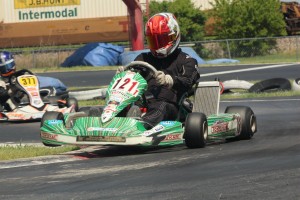 Another driver named Lewis shined in the Chase Racing Rotax Junior category, with Ryan C Lewis extending his win streak to four. Lawson Nagel opened up the day as the top qualifier, going on to win the opening heat race. Lewis got the better of him in Heat #2, and the duo fought back and forth for the victory in the main event. Riley Dickinson made it a three driver battle, with Lewis edging out Nagel for the win by 62 thousandths at the line. Nagel qualified first once again when Sunday’s round of racing, with Dickinson the driver to beat once racing started. After winning the two heat races, Dickinson started the main event on the pole position. Lewis overcame troubles in the heat races to climb his way forward. My lap seven of the 12-lap event, Lewis was into the lead and drove away to a four-second advantage for his fourth straight victory. Miguel Ruiz slipped into the second spot, pushing Dickinson back to third.

Paige Evans scored both victories in the TaG Junior division. Max Stephens was the top qualifier for Saturday’s round with Tyler Orum winning Heat #2. Evans was the opening heat winner and went on to score the feature victory. Stephens placed second with Orum in third. Sunday, Stephens was again the best driver on the clock in qualifying, but Evans responded to lead the remainder of the day. Stephens was runner-up once again, with Cooper Heffley into the third spot. TaG Master saw Round One winner Ric Baribeault add two more victories to his 2015 total. Erich Polack won both heat races on Saturday, but Baribeault had the edge in the feature. Polack ran second to Baribeault on Sunday as well. 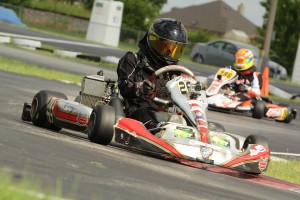 Harry Gottsacker add two more wins to bring his total to four in the Dallas Karting Complex Rotax DD2 class. Former Team USA member Nathan Mauel kept the pressure on all day, but was only able to score a heat win on Saturday with Gottsacker showing the way in the remaining on track sessions. Lance Lehrman was uncontested in Kart Racing Solutions Rotax DD2 Masters. Alexis Costa and Rod Clinard, making his first start of 2015, went back and forth in the SwedeTech Racing Engines S4 Master Stock Moto division. Clinard led the majority of Saturday, before Costa stole the feature race win. Clinard completed the sweep on Sunday, earning his first main event victory of the season.

The series is right back into action on July 10-12 as the program visits the Dallas Karting Complex in Caddo Mills, Texas. Registration is currently open at the series website with the $50 discount in effect for those drivers who enter before midnight on July 5. Additional updates on the 2015 Burger King®/Texas Barge ProKart Challenge series – presented by 3G Kart Racing, Dallas Karting Complex and IAME USA West is available at texasprokartchallenge.com and be sure to find Texas ProKart Challenge on Facebook.