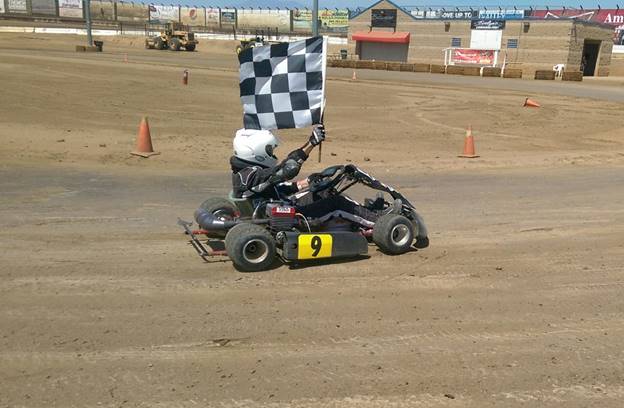 The So Cal Oval Karters celebrated Father’s Day weekend with the “Father’s Day 40’s” last Saturday afternoon at world famous Perris Auto Speedway.  Winners in all four of the classes were 2015 repeat victors and they took home some more hardware to put on the mantel piece.

Racing under the sun, temperatures were pushed to the 100 degree mark at the track located at the base of the Lake Perris Dam.  For the SCOK, it was the second of four appearances of the year at the track affectionately known to its legion of fans as The PAS.  However, it was the first on the infield oval.  The previous race in May was on the road course.

Neither the oval track or road course at The PAS have proved to be a problem for Rob Marion in the KT100’s.  After winning the main on the road course three weeks earlier, the Oxnard racer became the first repeat winner in the class in 2015 when he outdistanced the field in Saturday’s 40 lapper.  After winning his heat, Marion started on the outside of the front row for the main and bested Rev Parker, Tyler Wilson of Long Beach and the Lake Forest father and son team of Mike and Mitchell Collins.  Mike Collins was “Hard Charger” in the KT100’s.  Palm Desert’s Greg Giffin won the other heat race.

Lake Elsinore’s Troy McIntosh notched his second win in the F200’s on the sizzling hot afternoon.  Like Marion, McIntosh, who won the season opener at the Perris Raceway in March, also won his heat race and started from the outside pole in the 40-lap main.  Menifee’s Don Amigliore took second with Matt Drottz of Long Beach, Banning’s Scott Gaynor and Steve Juillerat of Whittier taking third through sixth.  Amigliore was the race “Hard Charger” and Drottz won the other heat.

This may start to sound a little redundant, but in the Open Class, the winner, Cody Nigh, nabbed his second win of the year, won his heat race and started on the outside of the front row in the main event.  Steve Patton of Cherry Valley chased the college student from Camarillo to the Kevin Winter’s checkered flag.  David Holland, Lakeside’s Chad Griggs and Norm Reynolds of San Marcos placed third through fifth.  Patton won the other heat race and Nigh was “Hard Charger.”

The only class that did not have a winner that started second was the Sr 4 Cycle class and the winner, Jason Voss, started on the pole.  Like the three other winners, it was Voss’ second win of the 2015 campaign.  His other triumph came at Wheel2Wheel Raceway in mid-May.  Former California Lightning Sprint Car racer Ryan Sherman, who resides in Lake Elsinore, placed second in the main event.  Desiree Gaynor of Banning, Matt Martis of Bonita and Riverside’s Garrett Schill comprised the next three spots.  Voss and Martis won the heat races and Sherman was the “Hard Charger.”

The Juniors were also on hand cutting laps on the oval.  Taking part was Tristan Juillerat, Jacey Voss and Troy McIntosh Jr.

The So Cal Oval Karters get this weekend off before heading to their biggest show of the year on July 4th at John Aden’s Wheel2Wheel Raceway on the San Bernardino County Fairgrounds in Victorville.  In addition to the So Cal Oval Karters, the Speedway Sprints, Dirt Karts and Fireworks after the races will all be a part of the show.

The So Cal Oval Karters would like to thank the following sponsors who help make the series possible.  Burris Racing, Cory Kruseman Sprint Car Driving School, Hubcapmike.com, Perris Auto Speedway, Professional Announcer Chappy, R&J Motorsports, THC Home Medical Services, T-MAC Racing and Yoa Racing Engines.  If you would like to become a part of the So Cal Oval Karters 2015 season, please call or E-mail Mike Nigh at (805) 857-2595 or scokart@gmail.com.