Behind the Laptop: The De-Evolution of Prestige in Karting

What everyone once ‘wanted’ has quickly become nothing they seek

My early days of karting were spent idolizing those drivers who were able to end the weekend holding the winning trophy. For me, I never understood the work, the money and the time it took to outrun a field of 20 Yamaha Lite drivers at the sprint track, or edge out 100 shifterkarts at the road race events, until I grew older. The idea of winning that big trophy at a major event was always a dream, but never evolved into reality. As I have grown older however, the prestige of those trophies does not seem to be what it was 10 years ago.

Football has the Vince Lombardi, hockey the Stanley Cup and golf has the Green Jacket at the Masters. Karting has a few iconic awards from its past, but what trophy will stand out in the future, and even shape the history of our sport?

The Duffy from the International Kart Federation was one of the first big trophies created, and it became one of the most sought-after in the sport. From Road Racing to Sprint to Speedway, racers would flock every year to the IKF Grand Nationals for a shot to winning the coveted trophy, named after Frank ‘Duffy’ Livingston. Duffy was among the co-founders of the first organized karting program, the ‘Go-Kart Club of America’, which later evolved into the International Kart Federation. The Duffy trophy was first handed out in 1976, and over the next 30 years was THE trophy everyone wanted on his or her mantle. In recent years, the competition level for a Duffy as dwindled, however, it is still one of the most remarkable trophies to earn.

The second most sought after piece of hardware has been the WKA Grand National Eagle. The award was brought into WKA events during the mid 1990s, and has been the trophy racers from the eastern half of the country have battled for at the organization’s biggest events. Next to the Eagle is the unique Triad, presented by KART. Based in the heart of America, KART promoted oval, sprint and road racing events for a number of years, and many high-profile drivers during the 1990s and early 2000s earned one or more of these awards. Today, KART is focused solely on road racing, but the Triad remains the mark of success in their organization. When it comes to street races, the Rock Island Grand Prix offers up the ‘Rock’ trophy to all its class winners. The Quad City area race over Labor Day weekend is a two-day party on and off the track, with the main event winners honored with the famous ‘Rock’ award for their efforts. 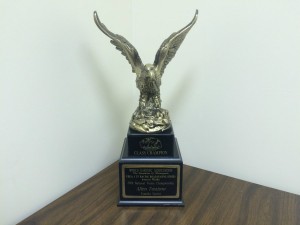 While there has not been a dedicated trophy for Superkarts! USA, everyone is racing to earn the SKUSA #1 plate. Similar to that of AMA racing, the top drivers in the SKUSA Pro Tour championship earn the SKUSA #1 plate for the following year. Depending on the driver, it will be mounted on the wall if you move up the SKUSA ladder system either in Stock Moto or TaG, or will be displayed throughout the following year on your racing machine, letting everyone know that you are the driver to beat.

The admiration of becoming a national champion and the chance to race on the world stage is what draws racers to the Rotax Max Challenge. The United States program is the only true national championship, as it brings racers from coast-to-coast to one event every year. While there is no annual trophy available for the event, what has become an annual award to the winner in the Senior Max, Junior Max, DD2 and DD2 Masters categories is a trip to the ‘Olympics of Karting’ – the Rotax Max Challenge Grand Finals. Each year, members from over 50 countries come together to decide each year’s world Rotax champion.

Personally, there was really only one trophy each year that I was after during the late 1990s and early 2000s…the Cheese Cow. The Road America Super Nationals road racing event welcomed nearly 1000 entries every summer, including a few years of over 100 shifterkarts on track at the same time. The winners in each class were handed the prestigious Cheese Cow. While I’m not a big fan of cheese – aside from the parm I put on my pasta, and the cheese on my daily pizza – it was the significance of earning the Cheese Cow, knowing that I had won at Road America. Unfortunately, there is no longer a Road America Super Nationals, and that trophy has now become a rarity. 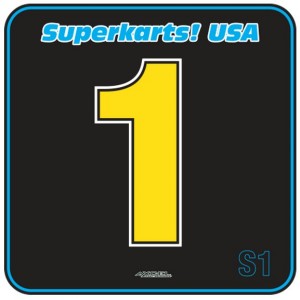 Sticking with road racing, there are many who consider racing at certain tracks as a ‘bucket list’ item. Many of those include Daytona, Mid-Ohio, VIR and Mazda Raceway Laguna Seca, etc. If I were to create a ‘bucket list’ for sprint tracks in the United States, the top-five would have to be New Castle Motorsports Park (New Castle, Indiana), Simraceway Performance Karting Center (Sonoma, California), GoPro Motorplex (Mooresville, North Carolina), US Air Motorsports Raceway (Shawano, Wisconsin), and Musselman Honda Circuit (Tucson, Arizona). It’s the combination of a challenging track and a destination city (Ed. And for two of the five, an In’N Out location). Thankfully, I have been able to drive on the first two.

Other tracks that I would like to test out are Grand Junction Motor Speedway (Colorado), PGP Motorsports Park (Kent, Washington) and Goodwood Kartways (Ontario, Canada). During the 1970s, Goodwood hosted the IKF Grand Nationals and my father took part, racing against Canada’s own Scott Goodyear, as well as Mark Dismore, and many others from karting’s history books. One day, I hope to visit the track and compete to make it full circle. Among those that are no longer available to us, but were extremely popular, are Moran Raceway (California), the Charlotte Motor Speedway sprint track and the original Dart Kart Club Speedway in Ohio. The Charlotte course remains, but there have been no competitive events contested on the layout in some years, aside from endurance karting races. The North American Karting Championships were held there back in the 1990s, and watching YouTube videos of these races makes me want to see another major event held there one more time.

Returning to the topic of trophies, it appears that this type of excitement has been lost. I’m not sure if it’s due to the different level of passion shown by the current karters on the national level, or if it’s that they are just racing too much to realize their accomplishments. Podium ceremonies seem to be more of a duty rather than a celebration, and racers do not hold the individual trophies they earn as something prestigious. It’s just not the same. 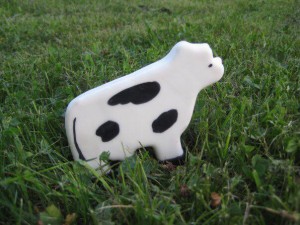 Thankfully, at an event I attended last year just to watch and help out, I was greeted with the excitement I’ve been looking for. A racer in a class of about five was able to beat his competitors, something he had never been able to do before. To him, the $20 plaque felt like winning the lottery, as you could not take away the smile and enthusiasm from that racer. Just because something is not at the national level, published all over the Internet, run in magazines, or in the local newspaper, does not make it irrelevant. That racer left knowing that they came and accomplished what they set out to do. I seem to find myself seeing this more often at the club events rather than the national races.

Moving forward, I think we need to see the prestige of the famed trophies honored now and for the future. Many karters ‘claim’ to be national champions, but I’d prefer to see drivers present themselves as an eight-time Duffy winner, or a six-time WKA Eagle victor, or a two-time Triad recipient. We need to elevate the triumph of winning one of the these trophies, or begin a process to create new ones so that 20 to 30 years from now, we will know who were the top drivers of this time.

12 thoughts on “Behind the Laptop: The De-Evolution of Prestige in Karting”