A series of spectacular finals characterized the 26th edition of the Andrea Margutti Trophy at the South Garda Karting of Lonato, race that has seen 160 drivers from 25 countries and 4 continents challenging each other on track 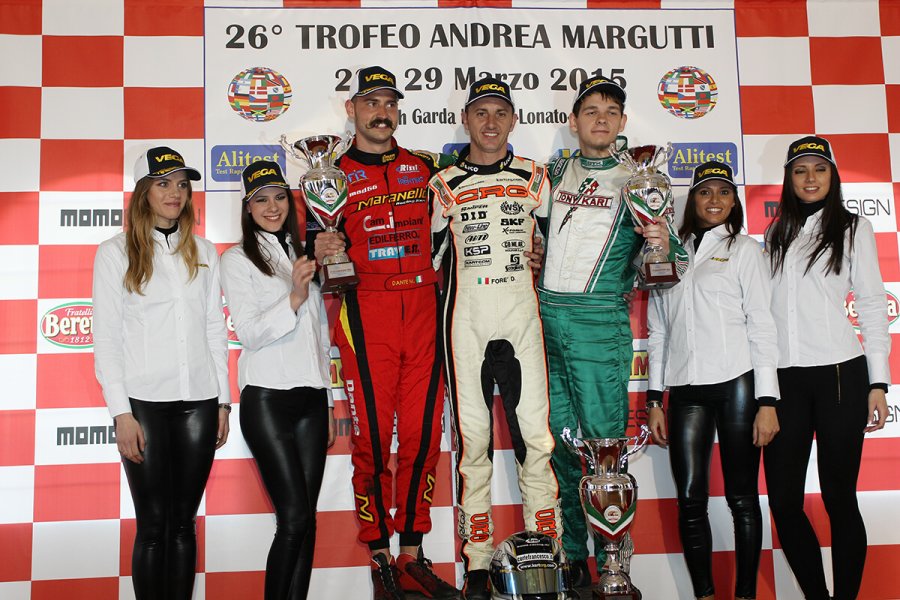 The Andrea Margutti Trophy ended with a good success at the South Garda Karting of Lonato. The success involved organization, managed as tradition by Parma Karting, as well as participation, with 160 drivers on track from 25 Countries and 4 Continents.

The spectacle on track in this 26th edition has been once again great, with the confirmation of some values on the field, but also some new emerging protagonists on the international karting scene that made even more precious the Hall of Fame of the event named after Andrea Margutti. The event lived on a splendid weekend, that was made even more interesting by the choreographic drivers’ presentation (the first international one in this season) where the 5 times world champion  Danilo Rossi, together with Andrea’s mum Patrizia Margutti, remembered the young karting promise Andrea Margutti who passed away early on 14 October 1989.

FORE’ IN THE HALL OF FAME OF KZ2
In the exciting KZ2, the most powerful category, the fight for the win involved mainly three drivers, but the talent and quality of a champion of the likes of  Davide Forè, on CRG-Tm run by Renda Motorsport, came out victorious as the driver managed to get the satisfaction of adding his name to the winner’s list of the event. This has been one of the nicest races in the whole history  of the Margutti Trophy, the battle has been tight until the very last meter as the CRG driver was challenged for the victory mainly by the German quick and surprising driver Alexander Schmitz (Tony Kart-Vortex), who dominated qualifying heats, and by Massimo Dante (Maranello-Tm), who has always been among the most competitive and combative drivers in the weekend of Lonato. A series of position exchanges inflamed spectators both in the Prefinal, won at the sprint by Forè from Schmitz to Dante, and in the much awaited Final that was characterized again by an alternation on top before Forè crossed the finish line pipping Dante and Schmitz. The other drivers taking the positions at the feet of the podium have been very competitive too: in order, they were the Irish John Norris (Mach1-Tm), Enrico Bernardotto (Maranello-Tm) and Giacomo Pollini (CKR-Tm), as the latter also set the pole position in qualifying.

KF DOMINATED BY VARTANYAN
A name was above all in KF. That of the Russian driver Alexander Vartanyan of Ward Racing, on Tony Kart-Vortex, who managed to take all his rivals. He set in fact the pole position, won the heats, Prefinal and dominated the Final. In truth, Vartanyan’s life was made easier in the Final by Leonardo Lorandi, also on Tony Kart-Vortex run by Baby Race, who lost some ground at the start despite starting from the front row next to Vartanyan. In the race, Lorandi put in a furious recover and managed to get the second place posting also the quickest lap of the race, but he ended more than 4 seconds shy of the leader. The third place went to the quick British driver Max Fewtrell (FA Alonso-Vortex) of team Ricky Flynn, who won last year’s trophy in KF Junior. The other top positions went to the Belgian driver Benjamin Lessennes (Zanardi-Tm), to the Dane Christian Sorensen (Kosmic-Vortex) and to the Finn Aatu Moilainen (Tony Kart-Vortex). Among the protagonists, the Dutch Richard Verschoor (Exprit-Vortex) had to retire after shining all the way to the Prefinal ended in P3. The British KF world champion of 2003, Tom Joyner, had to give up due to rib pain as the American Logan Sargeant in KF Junior.

MAINI LEADING KF JUNIOR
Another absolute protagonist of the weekend has been the Indian Kush Maini (Tony Kart-Vortex) of Forza Racing in KF Junior. Maini has been the quickest since qualifying practice and kept his momentum in heats, Prefinal and then in the Final, winning a race that he led from lights to flag. The second place went to a surprising Lorenzo Colombo (Tony Kart-Lke) of Foco Racing, while the Spaniard David Vidales of Energy Corse took the third step of the podium. The fourth position went to the Dane Noah Watt (FA Alonso-Vortex), who led the Russian Ivan Shvetsov (Tony Kart-Vortex) and the other Danish driver Frederik Vesti (Energy-Tm). The quick Spanish girl Marta Garcia (FA Alonso-Tm) had to settle for P14 after the fourth time in the Prefinal and the second time in qualifying.

60 MINI TO MARSEGLIA
As expected, 60 Mini has been very tight until the final corners, as it was won in the final lap by a winning and clever mingling of trajectories by Leonardo Marseglia (CRG-Tm) of team Gamoto from a combative, and exciting to watch, Giuseppe Fusco (Tony Kart-Tm) of team Baby Race. Among the protagonists of the crowded 60 Mini, Marzio Moretti (Tony Kart-Tm) of Lario Motorsport won the Prefinal and ended on the podium of the Final. The top ten was rounded up by Luca Giardelli (Tony Kart-Tm), Francesco Crescente (Energy-Tm), Mattia Michelotto (Energy-Parilla), Jose Gutierrez Gomez (Mad Croc-Tm), Jacopo Guidetti (Tony kart-Tm), Lucas Sommerlund (CRG-Tm) and Tereza Babickova (Tony Kart-Tm).