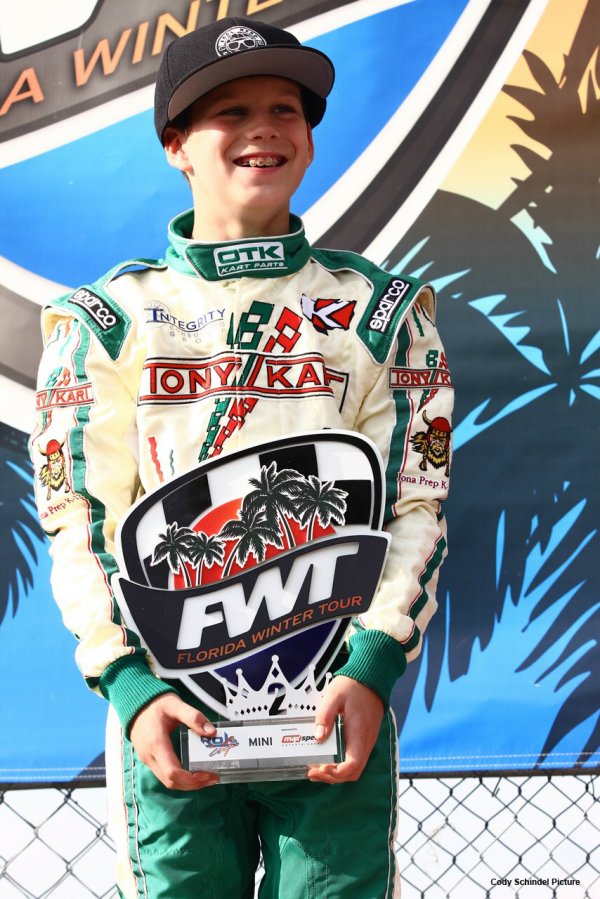 Wow! What an exciting weekend of racing for Nicholas d’Orlando and the d’Orlando brothers at the Cold Stone Florida Winter Tour Powered by MAXSpeed championship weekend in Ocala, FL.  Nicholas took home the Vice Championship title in the Mini Rok series as he contended with European Johnny Edgar in a nail biting point’s battle. It would come down to the final race of the weekend in Mini Rok to crown the champion, while older brother Michael would finish up his rookie Junior Rok campaign as one of the top rookies and 10th overall in the championship.

Nicholas came into the Florida Winter Tour Vortex Rok series Championship weekend with a slight 7 point lead over Edgar, knowing that the weekend would be a heavy point’s opportunity for the entire field. Nicholas would once again consistently be in the top of the field all weekend long throughout qualifying sessions and heat races. He would stick to his game plan by maintaining his patience & composure throughout the entire race weekend and keep his eye on the championship.

With solid top finishes in Saturdays heats, garnering him the pole position for Sunday’s Pre-Final race and slight 10 point lead, Nicholas would run his No.115 Tony Kart neck and neck with Edgar in an epic five kart battle throughout.  In the aggressive final lap, Edgar would score the win while Nicholas was shuffled back to the 5th spot, giving Edgar a 24 point lead heading into the main event.  It would come down to the final race to see who is crowned champion.

“Going into the final I knew that I needed to do more than just win the race”, said Nicholas.  “This race was a tough battle to the front. My focus was to keep the karts that I needed behind me & in front of Edgar in order for me to be the champion”.

Knowing he was guaranteed a minimum of a second place in the championship, Nicholas needed to control the race and keep a two kart gap over Edgar, with a victory, to win the championship.  To continue with the strategy, Nicholas went to point quickly.  With a gap growing from the rest of the field, Nicholas controlled the pace to let Canadian Matthew Latifi back into the mix.  All three drivers would take their turn swapping the lead, as Latifi also needed the win to move into the last podium position for the championship.  The entire race was a chess match for Nicholas to keep Latifi in the mix and Edgar behind Latifi.  As the white flag flew, Latifi had the lead as Edgar held Nicholas at bay by strategically blocking through corners, and eventually gave Latifi a gap too much for Nicholas’ to overcome for the win.  Nicholas would quickly get by Edgar in the final lap to finish second in the race and his second championship podium in as many years, with the 2015 Florida Winter Tour Mini Rok Vice Champion title.

Coming off last year’s championship win in the 2014 Florida Winter Tour Tag Cadet series, Michael’s championship weekend in the Vortex Junior Rok class would prove he is one of the top rookies in the field.  Saturday heat races results earned Michael a 10th qualifying position for Sunday’s pre-final and a 11th starting position for the Final.  Sunday proved another strong race day for Michael as he drove his No.257 Tony Kart to an 11th place finish in the Rotax Junior Max final keeping him in the top 10 for the 2015 Florida Winter Tour Junior Rok championship series.

Both Michael and Nicholas will be back on the track this weekend for the final round of the Florida Winter Tour Rotax MAX Challenge Championship at the Ocala Gran Prix in Ocala, FL.  Nicholas will be fighting again for another championship title as he currently sits second in the point’s race, while Michael looks to break into the top 10 currently sitting 13th.

DRC would like to give special thanks to their team at KoeneUSA(www.teamkoeneusa.com), including Mike Maurini, Martijn Koene, Chris Wheeler and DRC’s Adam Johnson for their continued hard work, support and dedication.  And thanks to the support of their sponsors at adidas Motorsport(www.adidasmotorsport.com),KoolNerdClothing (www.koolnerdclothing.com),andIonaPreparatory School (www.ionaprep.org),Integrity Consulting Group (www.icgpm.net).